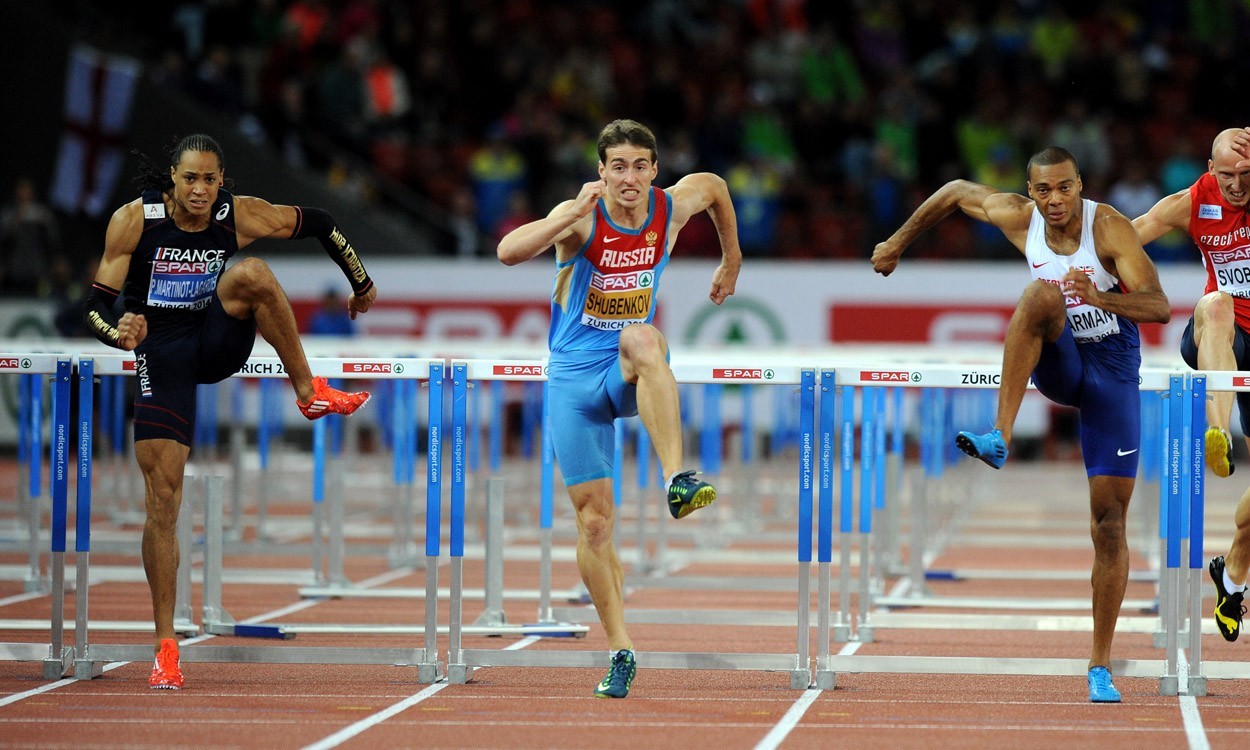 Sergey Shubenkov won a close 110m hurdles final at the European Championships in Zurich on Thursday evening to retain his title as Britain’s Will Sharman recovered well from bashing a barrier to surge over the line for silver.

Sharman’s medal is the eighth for Great Britain in Switzerland and he clocked 13.27 to claim it behind the Russian’s 13.19.

France’s Pascal Martinot-Lagarde – second quickest in the world this season with his 12.95 PB from July – initially just missed out on a medal. However, his team-mate Dimitri Bascou, who had crossed the line third, was later disqualified for a lane violation and Martinot-Lagarde promoted to bronze, through reportedly he had protested against Bascou’s disqualification and said his team-mate should get the medal as the lane violation did not affect the result. Balázs Baji ran a Hungarian record, equalling Martinot-Lagarde’s time of 13.29, while Britain’s Lawrence Clarke was a DNS after he strained his hamstring slightly in the warm up.

Earlier on and Sharman had gone sub-13.20 for the first time with a 13.16 personal best to secure his spot in the final as Shubenkov clocked the same. With his seventh-place finish in the second semi final Britain’s 2010 European and Commonwealth gold medallist Andy Turner didn’t make it through and that race is likely to be the last time be pulls on the GB vest having earlier this week announced that he will be hanging up his spikes at the end of the season.

“I’m really happy to come away with the silver medal as I made two big hits against the hurdles so I came back from that really well and I didn’t get caught,” said Sharman. “I should have just focused more. It’s different now as I’m faster and so the hurdles are coming up no me quicker. But I’m getting used to being among the world’s best now. This only gives me strength going into the World Championships in Beijing next year and for the 2016 Rio Olympics.”

There were also further changes to the results affecting the French team as two-time Olympic silver medallist and defending European champion Mahiedine Mekhissi-Benabbad was disqualified after winning the 3000m steeplechase final.

The 29-year-old, who also has two world bronze medals to his name, had taken his vest off as he approached the final barrier, waving it around before putting it in his mouth and continuing to dominate the race, crossing the line topless in 8:25.30 to continue his controversial ways.

His French team-mate Yoann Kowal crossed the line second, ahead of Poland’s Krystian Zalewski. Ángel Mullera of Spain was fourth over the line, the Spanish team later putting in a protest over the removal of Mekhissi-Benabbad’s vest, IAAF rules 143.1 and 143.7 – relating to clothing and bibs – applying. 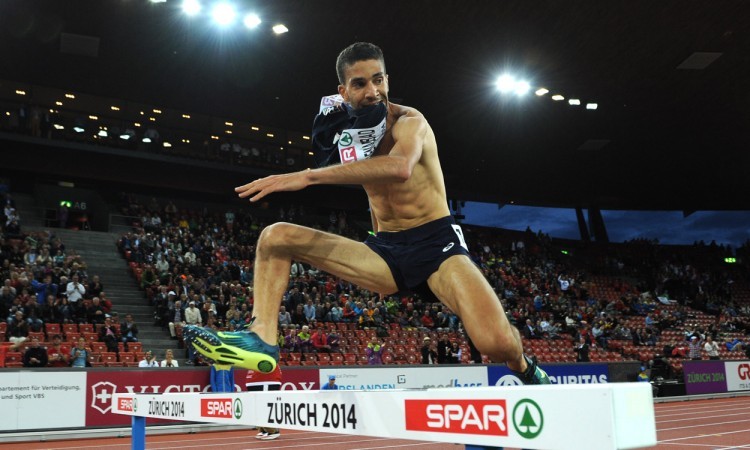 Barbora Špotáková added the European javelin title to her impressive collection of major golds, completing the full set with her two Olympic titles and world gold from 2007. A fourth-round throw of 64.41m put her 20cm ahead of Serbia’s 2009 European junior champion Tatjana Jelača with a national record. Germany’s Linda Stahl – European champion in 2010 and Olympic bronze medallist two years later – bagged the bronze this time with 63.91m as GB’s team captain Goldie Sayers, who has returned this season following career-threatening injury, threw a best of 58.33m for eighth.

One jump was all France’s Benjamin Compaoré would have needed to claim the triple jump title as he leapt a European-leading 17.46m in the first round. Lyukman Adams’ first jump was also his best as he managed 17.09 for silver ahead of his fellow Russian Aleksey Fyodorov with 17.04m – that medal-winning mark also coming in the first round.

Russia’s Anzhelika Sidorova grabbed gold at the last moment in the women’s pole vault as the world indoor silver medallist was outside of the medals having passed at 4.60m but she cleared 4.65m on her final attempt to take the title ahead of Greek vaulter Ekaterini Stefanidi and her Russian team-mate Angelina Zhuk-Krasnova, both with 4.60m. Germany’s Lisa Ryzih also cleared 4.60m but missed out on a medal on countback.

Belgium’s 19-year-old Nafissatou Thiam, the European junior champion, leads the heptathlon rankings overnight with 3851 points, helped on her way by a 1.97m clearance in the high jump to equal the best-ever height recorded in the event as part of a heptathlon competition. Germany’s 2009 European junior champion Carolin Schäfer boosted herself to second overnight with a 200m personal best of 23.84 and as the only athlete to go sub-24 seconds gain some vital points for a four-event tally of 3845. Favourite Nadine Broersen of the Netherlands sits third with 3841 points.

Earlier on in the day and Dina Asher-Smith had again proved that Kathy Cook’s UK junior record of 22.70 from 1979 might not stand for too much longer as she ran 22.75 in the heats for a time just one hundredth of a second off her lifetime best. A few hours later and both marks were obliterated in the semi finals, as the 18-year-old – fresh from world junior 100m gold – clocked 22.61 to also go fifth on the UK senior all-time list.

The Briton finished second in her semi final behind France’s Myriam Soumaré with 22.56 for the third quickest time of that second round, newly-crowned European 100m champion Dafne Schippers – who is focusing on the sprints in Zurich rather than the heptathlon – running 22.48 to go quickest. Asher-Smith’s fellow Brits, Jodie Williams and her namesake Bianca Williams, also progressed with 22.90 and 22.91 respectively to make it the first time in 52 years that three British athletes will have made a European women’s 200m final.

Switzerland’s Mujinga Kambundji, having set two national 100m records over the past couple of days then run a Swiss under-23 record of 23.05 in the 200m heats, went on to clock 22.94 to again break that under-23 mark in the semi finals.

As he did in the heats, sub-20 second 200m man Adam Gemili also went quickest in the 200m semi finals, easily cruising through to the final with 20.23 with enough time to turn his head both ways to check for his rivals. He was well clear and eased right down as he approached the line. France’s three-time European sprint gold medallist Christophe Lemaitre won his semi final in 20.26 and behind him Ukraine’s Serhiy Smelyk ran a 20.32 PB. There was also a personal best for Italy’s Diego Marani with 20.36 and a Turkish record of 20.38 for Ramil Guliyev to beat Britain’s James Ellington with 20.52. Ellington missed out on a spot in the final by just a thousanth. With 20.62 behind semi final winner Gemili, his British team-mate Danny Talbot also failed to progress.

There was a strong performance from defending champion Lynsey Sharp in the second 800m semi final. Finding herself at the front, no one else tried to take it on and she had enough left to pull away on the home straight to clock 2:01.32 and ease through to Saturday’s final. There she’ll be joined by team-mate Jess Judd who was pleased with her run for third in 2:01.53 to get the last automatic place behind Russia’s Olympic bronze medallist Yekaterina Poistogova. The Brits won’t be joined by their team-mate Alison Leonard, though, as after a smooth heat she was involved in a bit of a clash on the back straight in the semi final. She stepped off the track at that point and later said how she was disappointed in having done so and that she should have pushed for the line, but that she had lost too much momentum. That semi final was won by Marina Arzamasova in 2:00.36 as behind her Joanna Jozwik ran a 2:00.58 PB.

Eilidh Child had a very smooth run to win her 400m hurdles semi final in 54.71 from Czech Republic’s 2012 silver medallist Denisa Rosolová with 54.96. Germany’s Axelle Dauwens ran a 55.63 PB behind them. Child’s time was the quickest of the second round as Ukraine’s world fourth-placer Anna Titimets clocked 54.90 to win the first semi final.

Defending European champion and world gold medallist Vítezslav Veselý progressed through to the javelin final though he was left to hope that his best of 80.00m was good enough as he was a metre down on the automatic qualifying mark. He will be joined by the likes of auto qualifiers Antti Ruuskanen and Tero Pitkämäki of Finland, Germany’s Thomas Röhler and Ansis Bruns of Latvia. Matija Kranjc set a Slovenian record with 80.46m to also progress.