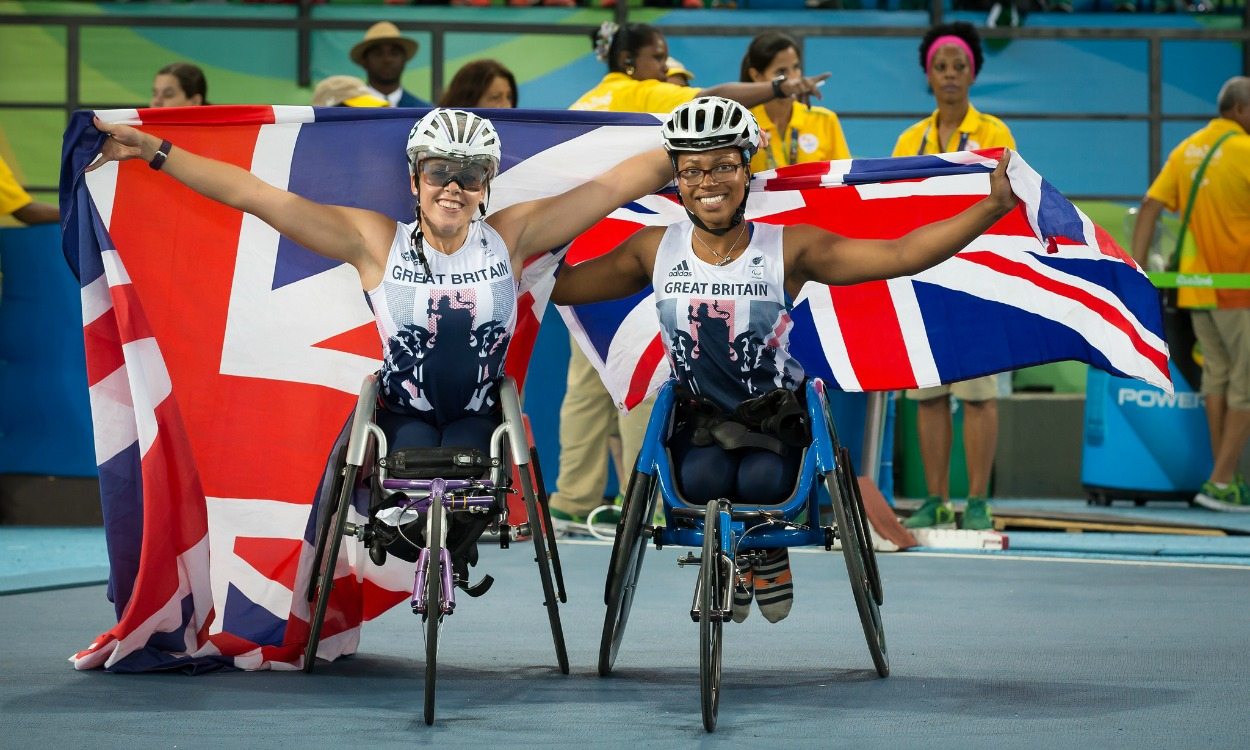 Hannah Cockroft continued on her seemingly inexorable quest for triple gold supremacy at the Rio 2016 Paralympics as she annihilated the field to break her own T34 400m world record.

The wheelchair athlete added to her 100m gold from Sunday with an equally dominant performance, finishing in 58.78 – her first time officially under 59 seconds.

Cockroft’s GB team-mate, 15-year-old Kare Adenegan, won her second medal of the Games as she improved her personal best by nearly three seconds to clock 61.67 for bronze behind US athlete Alexa Halko who took silver in an American record of 60.79.

The Halifax athlete is the first T34 400m gold medallist since Australian Rebecca Feldman in Sydney 16 years ago after the event was removed from the schedule, and she’ll aim to complete the set and win a fifth Paralympic gold in the 800m on Friday.

Cockroft, champion over the 100m and 200m four years ago in London, said: “I feel like even though the job isn’t quite yet done, I’ve got a world record and all season I’ve been wanting to dip under that one-minute mark. I’ve been consistently around one minute all season and I just had a feeling I could get under it.

“I wanted it so bad and I really had to dig in that last 100m and I thought ‘I’ve got too much left here, I’ve got to go quicker.’ I believe I can still go quicker than what I just did.”

A shock defeat over the one-lap event to Adenegan last year is the only threat Cockroft has experienced to her superiority in the past five years, and from the gun there looked like no chance of it being a repeat as she flew out and ate up the stagger on the athletes inside her within the first 150 metres.

While Cockroft was left to race her own race up the front, Adenegan was locked in a fierce battle with Halko, six months her senior, and looked to be heading for silver in the home straight until she was reeled in by the world silver medallist.

Adenegan, who will attempt to add a third medal to her collection in the 800m, said: “It is amazing to win a second medal; it is a huge blessing for me. It was a tough race – I could see Rosemary Little getting closer and closer but I was just thinking ‘no, I am going to beat you!’

“I was definitely going to get on that podium. The 100m (silver) was amazing and I think that gave me that adrenaline and drive to deliver another great performance. If there was a place to start getting a PB, then it would be here – and I’ve managed to do it in the 100m and 400m here. It leaves me so excited for the 800m.”

David Weir made sure he’ll have a shot at defending his T54 800m title for a second time, having retained gold in London four years ago, after he qualified easily through his heat in 1:37.30, though the 37-year-old faces a huge battle to overcome world record-holder Marcel Hug, who went through fastest. Richard Chiassaro, quadruple European medallist, failed to qualify for the final.

It wasn’t to be a golden send-off for home favourite visually impaired sprinter Terezinha Guilhermina as she anchored the Brazilian T11-13 team to silver behind a world record-breaking Chinese quartet, who clocked 47.19. The second place is some consolation given the 37-year-old, a three-time Paralympic champion, was disqualified from both the 100m and 200m earlier in these Games.

Britain’s F51 club throw gold medallist Jo Butterfield had to settle for fifth in the F52 discus – the weaker of her two events – as the US secured a one-two on the podium with Rachel Morrison setting a world record of 13.09m to beat Cassie Mitchell.

World record-holder Walid Ktila in the T34 800m was beaten by a wheel by UAE racer Mohamed Alhammadi, who came within three hundredths of a second of the Tunisian’s record to set a Paralympic best of 1:40.24. Australia’s Rheed McCracken took bronze while 17-year-old Brit Isaac Towers came fifth in a PB of 1:43.45.

The men’s T44 400m is shaping up to be a hot contest after Germany’s David Behre and US blade runner Hunter Woodhall won their respective heats at ease, the former clocking a 47.75 to go second behind the 17-year-old American in the world rankings.

In the women’s T47 400m – a category for upper limb disabilities – China’s Li Lu pegged back a big lead held by South African Anrune Liebenberg to claim gold in 58.09.

Bilius Mindaugas got Lithuania its first gold of the Games in the T37 shot put with a 16.80m throw, adding to his F37 discus silver.