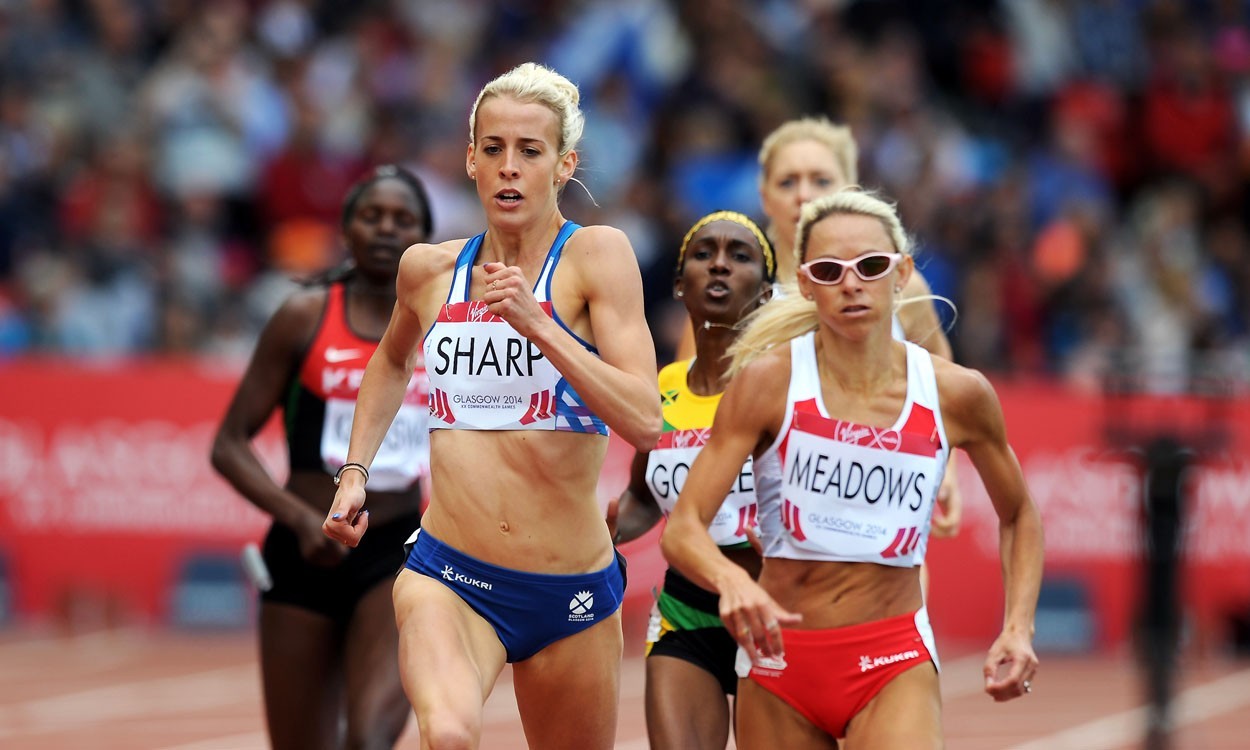 Home country representatives were among those to advance in the women’s 800m on Wednesday as Scottish favourite Lynsey Sharp and her team-mate Emily Dudgeon booked semi-final spots along with England’s Jenny Meadows, Jessica Judd and Marilyn Okoro.

World champion Eunice Sum’s single loss this year was to American Ajee Wilson and she tops the Commonwealth rankings with her 1:57.92 from that race in Monaco. The favourite was another to cruise through to the next round on Thursday evening with 2:02.36 to take the final heat from Northern Ireland’s Katie Kirk. Quickest of the first round was Canada’s Melissa Bishop with 2:01.73 from Judd’s 2:02.16 in the third heat.

There were no real surprises in the first round of the men’s 200m as favourite Warren Weir of Jamaica and his team-mates Rasheed Dywer and Jason Livermore were among those to progress to Thursday evening’s semi-finals.

England’s Danny Talbot was among the heat winners as he led coming off the bend in the fourth heat to ease down as he approached the line and clock 20.56 ahead of Canada’s Brendon Rodney. Livermore won the seventh heat from England’s James Ellington – 20.71 to 20.73. Jamaica and England took the top two spots in the eighth heat too as Dwyer won in 20.59 from Chris Clarke with 20.71.

Northern Ireland’s Leon Reid, who false started in his 100m heat, ran 20.97 for third place in the fifth heat to go through as a fastest loser, while Guernsey’s Tom Druce did not start.

Athletes seemed to struggle with the chilly and blustery conditions in the 400m hurdles heats. Wales’ defending champion Dai Greene will not progress, his 50.36 in the third heat placing him fifth. World champion Jehue Gordon of Trinidad & Tobago took the first heat in 49.42 from Jamaica’s Annsert Whyte with 49.58 as England’s Niall Flannery – considered a medal contender ahead of the Games following his 48.80 PB and his first British title this year – ran 49.97 for fourth to also miss out on a semi-final spot.

It was Flannery’s team-mate Richard Yates who took the final fastest loser spot ahead of him as Yates ran 49.80 in the third heat won by Jamaica’s Roxroy Cato in 49.51. Cornel Fredericks of South Africa leads the rankings with 48.42 and he won the second heat in 49.26 as England’s Seb Rodger placed fourth with 50.71. Northern Ireland’s Jason Harvey ran 52.06 for fifth.

Bianca Stuart of Bahamas and Chantel Malone of British Virgin Islands leapt the automatic qualifying mark in the long jump with 6.67m and 6.55m respectively and they will be joined in the final by all three of England’s athletes – Shara Proctor, Jazmin Sawyers and Lorraine Ugen – while Scotland’s Jade Nimmo and Sarah Warnock didn’t do enough to advance. Birchfield Harrier Amy Harris, the English champion in 2010, switched allegiance to Antigua and Barbuda earlier this year but failed to post a mark to progress. The event was missing newly-crowned Commonwealth 100m champion Blessing Okagbare, who would have been the favourite, as the Nigerian focuses on sprint events in Glasgow.

Three athletes bettered the automatic qualifying mark in the men’s discus, while England’s Carl Myerscough, Wales’ Brett Morse, Scotland’s Angus McInroy and Jersey’s Zane Duquemin were also among those to make it through to the final. In the absence of Commonwealth No.1 and 2012 world junior champion Fedrick Dacres, defending champion Benn Harradine has thrown furthest this season with 65.94m and he also progresses with 61.06m.

No one managed 1.88m to automatically qualify for the women’s high jump final, but Scotland’s Jayne Nisbet and England’s Isobel Pooley were among the 10 athletes who managed to clear 1.85m and make it through. St Lucia’s Levern Spencer is the Commonwealth rankings leader with her 1.96m clearance from April, a height two centimetres down on her personal best. She also went clear at 1.85m along with 19-year-old team-mate Jeannelle Scheper.

Canada’s Brianne Theisen-Eaton continues to lead the heptathlon after five events, her 4927 points putting her 361 ahead of team-mate Jessica Zelinka. England’s Jessica Taylor remains in the bronze medal position with 4419 points after she leapt 6.16m in the long jump behind world silver medallist Theisen-Eaton’s 6.44m.