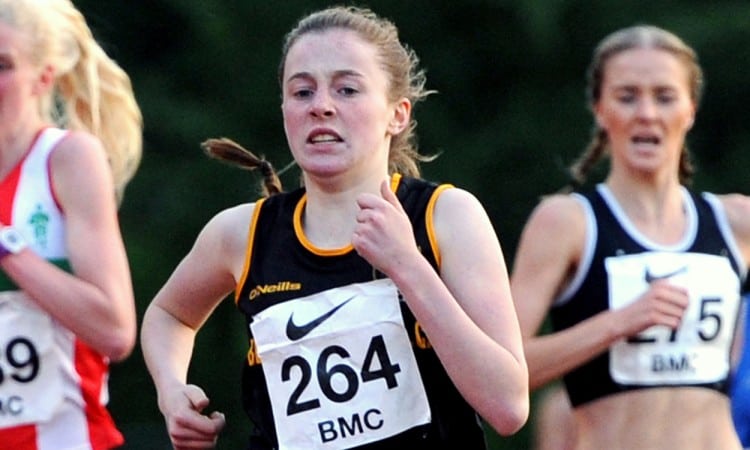 Irish teenager moves to second on the European under-18 1500m all-time list after her run in Germany, while Traynor clocks 28:32 for 10km

A report on the first day of the England Athletics U23 and U20 Championships, featuring a British under-20 hammer record by Jake Norris, can be found here, while a day two report is here.

Irish 17-year-old Sarah Healy clocked 4:09.25 for 1500m to smash the Irish under-18 record and move to second on the European all-time list for the age group.

Her time also puts her 10th on the Irish senior all-time list and is a qualifying standard for the European Championships in Berlin.

Healy achieved her time when placing 11th in a race won by Portugal’s Marta Pen Freitas in 4:06.21. Ireland’s Ciara Mageean was fourth in 4:06.70 and British steeplechaser Rosie Clarke seventh in a big PB 4:07.69.

Also in Tübingen, Adelle Tracey achieved the European Championships 800m standard with 2:00.91, while Adam Hague cleared 5.60m for second in the pole vault.

Traynor’s 28:32 moves him to third on the Scottish all-time behind Allister Hutton and Andrew Butchart, while it’s the fifth fastest road 10km by a British athlete since 2000.

Shara Proctor leapt 6.73m (+0.9) for third in a long jump competition won by Colombia’s Olympic triple jump champion Caterine Ibargüen with 6.87m (+0.5). Abigail Irozuru was fifth with 6.60m (+1.2) as she continues her comeback after injury, achieving a European Champs standard.

Arthur Abele and Carolin Schäfer claimed a German double victory, scoring 8481 points in the decathlon and 6549 points in the heptathlon respectively.

Jessica Taylor-Jemmett was second in the heptathlon with 5590 points.

Ben Gregory was fourth in the decathlon with 7582 ahead of John Lane with 7545 points.

Not the score I was after but 4th place in Kladno. Several seasons bests & a lot of events that could have been. This was nearly a great decathlon. We’ll be back for more! #britsabroad #decathlon pic.twitter.com/mMURszGY4J

Paul Jones of Shrewsbury AC claimed the men’s title in a time of 74:10, 22 seconds ahead of Barry Reynolds. Thomas Vaughan of Shropshire Shufflers took third place in 74:48.

The women’s race was won by Sophie Birtles in a time of 86:16, with Sara Willhoit of Shrewsbury AC crossing the finish line in 88:57 and third place going to last year’s winner Belle Ward, who finished in 90:20.

There was a course record-breaking win by AFD’s Richard Allen who clocked 14:05, while Morpeth’s Mhairi Maclennan won the women’s race in a big PB of 16:11.

Wang Jianan equalled the Chinese long jump record with a leap of 8.47m.

» Further coverage and results in the June 21 edition of AW