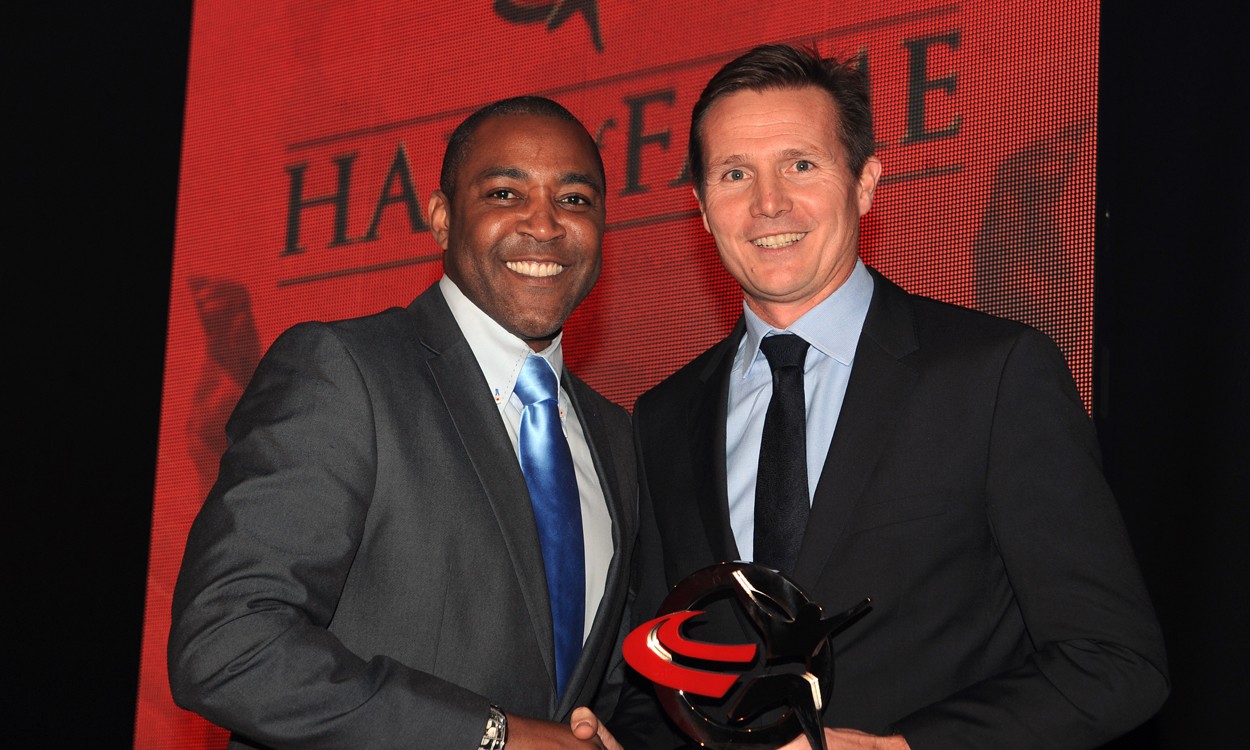 Olympic silver medallist Roger Black was among those present to be inducted into the England Athletics Hall of Fame on Saturday night at the Hilton Metropole in Birmingham, while coach Peter Coe and athlete Lillian Board received posthumous honours.

Basil Heatley, Joan Allison, Danny Crates, McDonald Bailey, Emil Voigt and Peter Elliott were also added to the Hall of Fame at the eighth annual awards ceremony, of which Athletics Weekly was one of the sponsors.

Black, a former UK 400m record-holder who was beaten to the 1996 Olympic title by Michael Johnson, was the final athlete to be added to the roster.

Earlier, appearing on the stage with master of ceremonies Katharine Merry was Danny Crates, who took Paralympic gold in the 800m in 2004.

Allison, Commonwealth 1500m silver medallist in 1970 and 1974, was awarded the honour partly for her services to athletics, having been GB team leader at the 1992 Olympics.

Heatley’s recognition came for his winning the 1961 International Cross Country Championships, during a career in which he won silver in the marathon at the 1964 Olympics and set world records for 10 miles and the 26.2-mile distance.

Coe, who died in 2008, guided his son, Sebastian Coe, to two Olympic 1500m titles and is legendary in the coaching world. Coe junior, who was unable to attend due to duties as IAAF president, was shown on screen in a prerecorded clip receiving the award from former training partner Wendy Sly.

Trinidad-born Bailey won Olympic 100m bronze in 1952, a year after he equalled the world record with 10.2. One of the most popular athletes of his generation, he died at the age of 92 in 2013.

Voigt was the last British athlete to win a distance event at the Olympics before Mo Farah. Reaching the pinnacle of his career at the 1908 Games at the five miles event, he died aged 90 in 1973.

Board won Olympic silver in the 400m in 1968 and European titles at 800m as well as 4x400m relay. Her best achievements might well have been ahead of her as her career was tragically cut short by cancer, from which she died in 1970 aged 22. Her brother-in-law David Emery was at the ceremony to represent her.

The winners of the volunteer awards were:

Club of the year: Chelmsford AC

Coach of the year: Deborah Bray

Volunteer of the year: Tobias Nwenwu

Official of the year: Malcolm Fletcher

The evening was also supported by AAA of England, Sweatshop and Track and Field Tours.

See next week’s AW for more.