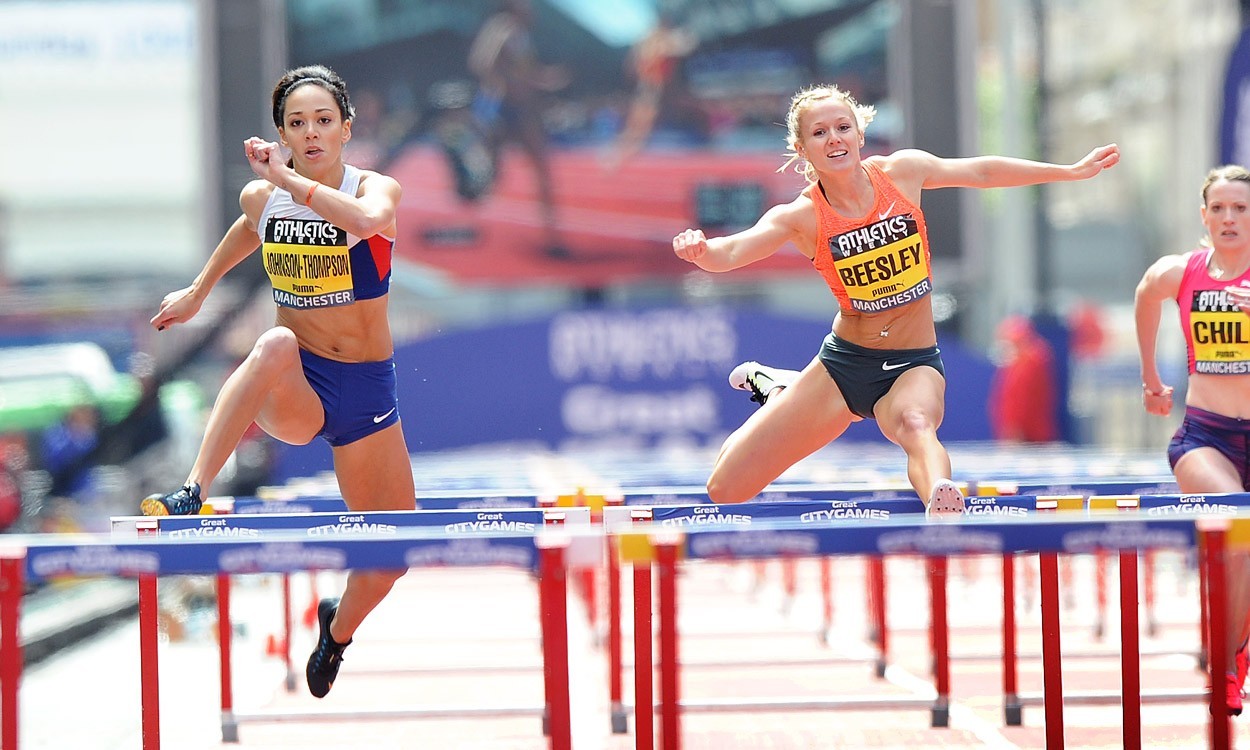 Such is the nature of the CityGames success story, even cold and wet weather could not dampen the spirit of athletes and spectators on Saturday. As the wind swirled and rain spat down from the grey Mancunian skies, Greg Rutherford described it as among the most testing conditions he’d ever competed in. Fellow long jumper Funmi Jimoh was wearing gloves, while sprinter Richard Kilty described his feet as blocks of ice as he sat shivering in his post-race interview. “This is why I put a full body suit on,” the world indoor champion added, “and I’m still freezing.”

The athletes who struggled most were the female pole vaulters and fans watched the frustrated competitors fail their first 10 efforts at the opening height of 4.10m before Katharina Bauer eventually cleared it – 11th time lucky.

Despite this, the CityGames continues to get the thumbs up from athletes and fans. Through rain or shine, it is seen as the future of the sport as it brings track and field into the streets and to the public for free. “I would love to compete in this event again,” added Silva via a translator. “The music and the noise from the crowd were phenomenal. It was a great atmosphere.”

Usain Bolt, of course, famously led by example in 2009 when he shrugged off wet conditions to run 14.35 for 150m – including a final, flying 100m in 8.72 – at the inaugural Great CityGames Manchester. Since then, street athletics has gone from strength to strength with events on Tyneside and the British capital.

Seb Coe, who is currently campaigning to succeed Lamine Diack as IAAF president, is a big CityGames fan and tweeted on the eve of Saturday’s meeting: “#GreatCityGames in Manchester today – a format that should be embraced for #Athletics to attract a new and growing fan base.”

As an athlete, Coe often kicked off his season at the county championships. Habits and traditions change, though, and it is unusual to see many elite athletes at the county champs these days. Instead, they fine-tune their bodies in warmer countries during the pre-season period and then increasingly choose the CityGames to open their summer campaign.

Most notably, this was Jess Ennis-Hill’s first meeting of not only 2015 but her first since the London Anniversary Games in 2013 as the Olympic heptathlon gold medallist finished third in the 100m hurdles behind winner Tiffany Porter. After taking the European indoor pentathlon title in March, this was also Katarina Johnson-Thompson’s first competition of the 2015 summer season as she finished runner-up to Meghan Beesley (pictured above) in the 200m hurdles. The same was the case for long jump winner Rutherford, plus many more.

The CityGames experience is not simply an entrée at the beginning of the summer season either. The CityGames in Newcastle and Gateshead is a well-established end-of-season destination for many and if Coe becomes IAAF president then we could see even more of these popular, out-of-stadia events in years to come.