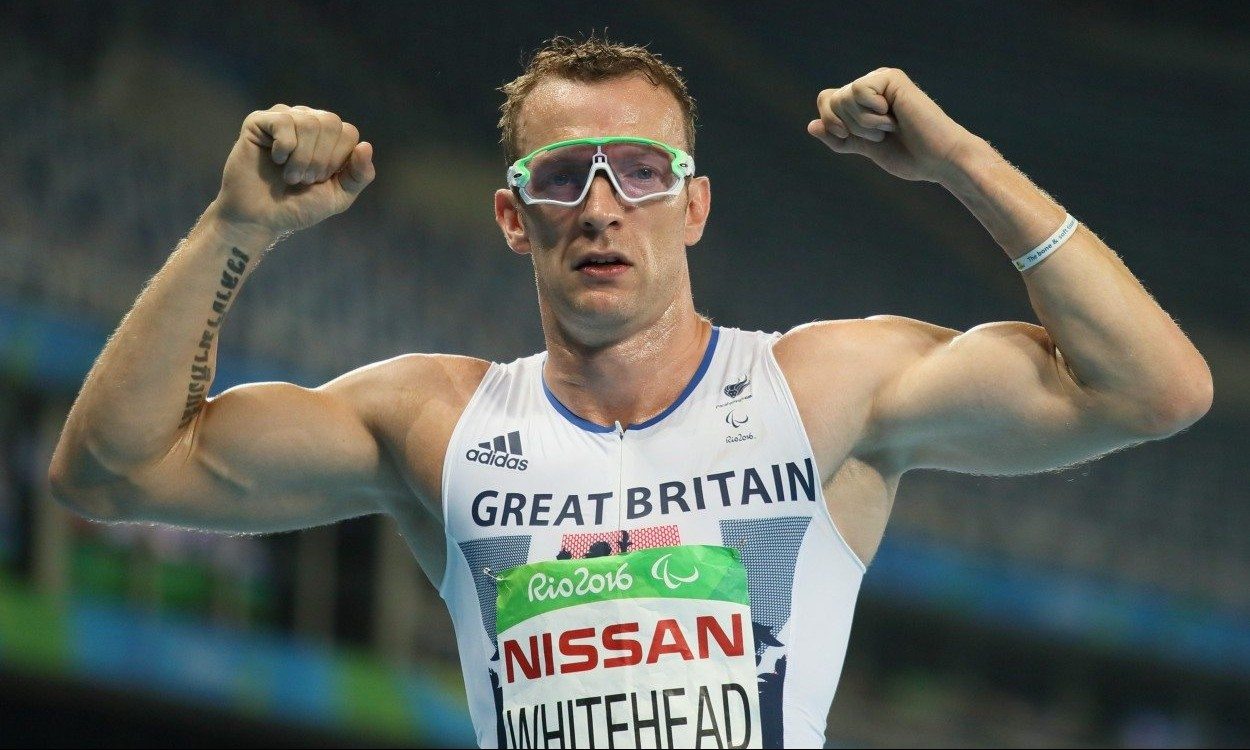 Richard Whitehead, one of the stars of London 2012, successfully defended his 200m T42 title in style, clocking 23.39.  The double-leg amputee, who broke his Paralympic record in the heats with 23.03, had to work hard on the bend but pulled away to victory with his usual late burst and Ntando Mahlangu was nearest to him with 23.77.

The 40-year-old Briton, who started off in the sport as a marathon runner but had to switch to sprinting because his classification did not include his favoured event, had gone into the event as a strong favourite after his 23.03 world record at the IPC Grand Prix final in London in July.

Whitehead said: “I think by the last 50m, I knew that I had won… It has been a tough 10 or 12 years in sport with a lot of challenges and obstacles to overcome. I am fortunate enough to have such a great team around me. Whether it has been my coach, Keith Antoine, who has been very loyal, or Tim Stevenson, Dave Jackson, British Athletics, Paula Dunn.”

As the GB athletics men’s team captain, he added: “The team as a whole is full of great ambassadors for the sport, and I enjoy being team captain. This has followed on from the success of Team GB, to try and be the greatest team ever and it has always been a pleasure to represent my country, whether that be as a participant or a team captain.”

It was double delight for the British team as David Henson took bronze with 24.74. Henson, who lost his legs after being hit by an explosive device while serving as a solider in Afghanistan in 2011, reflected on his journey to Olympic medallist. “Who’d have thought it? That fat lad from Southampton is a Paralympic bronze medallist, unbelievable,” he said. “It was tight for the medal – I wasn’t convinced I’d got it but I carried that belief all the way with me during the race. I raced with heart and with the belief.”

Jo Butterfield added Olympic gold following her world and European titles over the past two years, beating her own world record with 22.81m in the club throw F51. The wheelchair athlete was trailed by silver medallist Zola Ovsii of Ukraine (22.31m).

Butterfield, who overcame a shoulder injury in the build-up, led from round one with 22.60m and her second-round throw added 6cm to her global mark from the Europeans. She said: “My first throw was just short of the world record and that felt quite easy, so I knew all I had to do was put a bit more speed into it. The second one, I held my breath because I’ve had a bit of a sore shoulder so I knew I didn’t necessarily have six big throws in me so I had to get it in straight away. I held my breath and went for speed then saw it fly.”

Britain’s Kylie Grimes, who was playing wheelchair rugby in London 2012, was fourth with 18.75m.

American Tatyana McFadden added 400m gold in 53.30 to her silver in the 100m as she continues her quest for seven medals in the T54 classification in Rio. Fellow American Cheri Madsen wheeled to 54.50 for silver ahead of China’s Zhou Lihong (54.70).

China’s Zhou Hongzhuan won the 400m T53, taking 0.26s off the world record held by Australian Angela Ballard, who claimed bronze (55.28). American Chelsea McClammer secured silver with 55.13. Zhou added to her victory in the 100m from earlier in the week.

Nigeria’s Lauritta Onye claimed the title in the women’s shot put F40, adding 68cm to her world record from last year with her fourth-round throw of 8.40m.

In the 1500m T13 for visually impaired athletes, Algeria’s Abdellatif Baka took more than half a second from the world record with 3:48.29. Also under the old mark was Ethiopia’s Tamiru Demisse, who ran 3:48.49 for silver. The winner’s twin, Fouad Baka, was fourth.

Maton said: “It was an amazing experience. The crowd were incredible. This was my first Paralympic track final and I’ve never experienced something as exhilarating before. After racing here in the heats last night, I think that settled the nerves so I was used to the reaction from the noisy crowd this evening.”

Another title to go Stateside was the 100m T11 for visually impaired athletes, won by David Brown. Running with a guide, he was 0.07 outside his world record as he clocked a Paralympic record 10.99. Brazil’s Felipe Gomes took silver with 11.08.

When Brazil’s Alan Oliveira upstaged Oscar Pistorius to win the 200m T44 in London 2012, he was expected to be the icon of Rio 2016. However, after failing to make the final of the 100m earlier in the week, he fell well short of reaching the half-lap final, crossing the line fifth in 22.63. That was more than a second slower than he ran in London.

New Zealand’s Liam Malone, the unexpected silver medallist here in the 100m on Friday, was quickest through to the final as his 21.33 was just 0.06 outside Richard Browne’s world record.

Six-time Paralympic gold medallist David Weir won his 400m heat in 46.55 in the T54 category as he began his Rio 2016 campaign as the third quickest qualifier for the final, winning his heat. After coming through from lane eight, he said: “I don’t like being chased down as I’m a better chaser. That’s a pretty good time for me – I didn’t go flat out which is good and it’s nice to get some racing under my belt. I felt good and comfortable.” Team-mate Richard Chiassaro also went through, clocking 46.98 for second in his race.

Tunisia’s Walid Kitila set a Paralympic record of 15.44 in being fastest through to the final of the 100m T34. Britain’s Ben Rowlings was fifth and last in his heat with 17.30.