Richard Kilty: “I’ve never had so much support in my life” 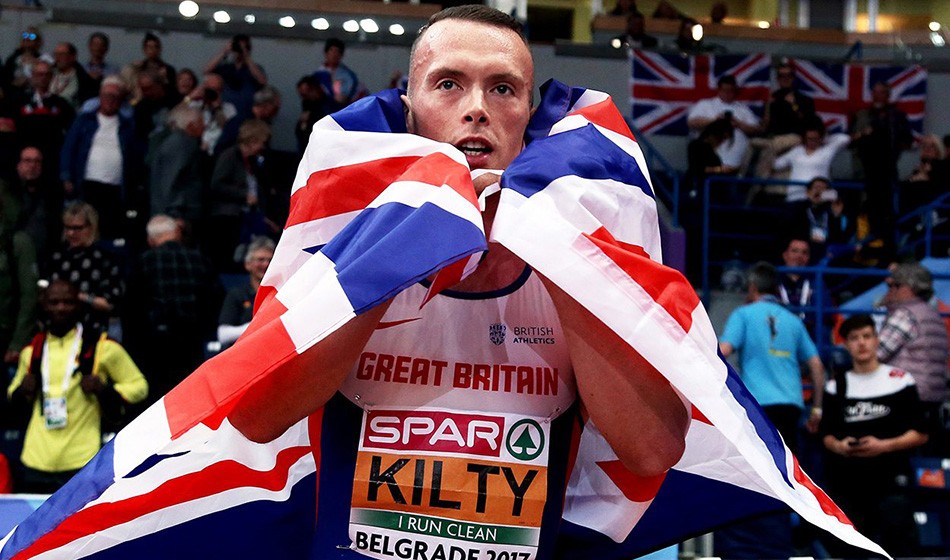 Richard Kilty will be looking to repay the wave of public support which has helped carry him to the Emirates Arena start line when he begins his campaign for a third consecutive 60m European indoor gold medal in Glasgow.

The 29-year-old was overwhelmed by the volume of goodwill messages which came his way in the wake of not initially being selected for the Great Britain team, despite being twice defending champion and having narrowly missed out on what many viewed to be British Athletics’ excessively tough qualify mark of 6.60 by running 6.63 in Birmingham (European Athletics’ standard is 6.78).

However, European Athletics stepped in to offer Kilty a special invitation to compete and the 2014 world indoor champion is now desperate to give the home crowd something to cheer in one of his favourite cities.

“The amount of support from the fans and the public has been incredible,” says the sprinter, who underwent Achilles surgery last year. “I’ve never had so much support in my life. I was in quite a rough place mentally but seeing all the support I had on social media – I can’t thank those people enough because it got me out of the house and I thought to myself ‘you know what, there’s so many people supporting me that there is a very small chance I could be selected’.

“So I went to the track and put in two really big running sessions and prepared as if I was going to Glasgow. Then I woke up the following morning and was told I was going. It’s a dream come true to get this opportunity.

“I didn’t realise how many people were supporting me on this. It’s been incredible and I just wish I could say a personal thank you, shake every person’s hand and give a hug to every single person who has supported me and messaged me.

“I’m going to go out and try and run and perform well for all those people.”

Glasgow is a happy hunting ground for Kilty.

He adds: “I won the first ever UK school games in Glasgow in 2006 at Scotstoun Stadium. I was 16 years old and it was the first time I raced on television. I won the 100m and was crowned the fastest schoolboy in the UK.

“I’ve got some great memories of Scotland. I won a Commonwealth Games relay silver there in 2014. It’s an amazing place for me.”

“My family’s origins are from Scotland,” says the Teessider. “The name Kilty was originally Irish, then a mixture of Irish and Scottish and then we filtered down from the Scottish borders into the North East of England a couple of hundred years ago.”

Hearing the roar of a British crowd will be music to the ears of an athlete whose only experience of competing at a major home championships came at those Commonwealth Games of five years ago.

“I felt it in Glasgow 2014 – that’s the only home championships I’ve ever experienced. I was representing England there but this time we’re together as Great Britain so I can wait to stand on the start line.”

» Pick up the bumper European Indoors preview issue of Athletics Weekly – out now – for a full, in-depth interview with Richard Kilty