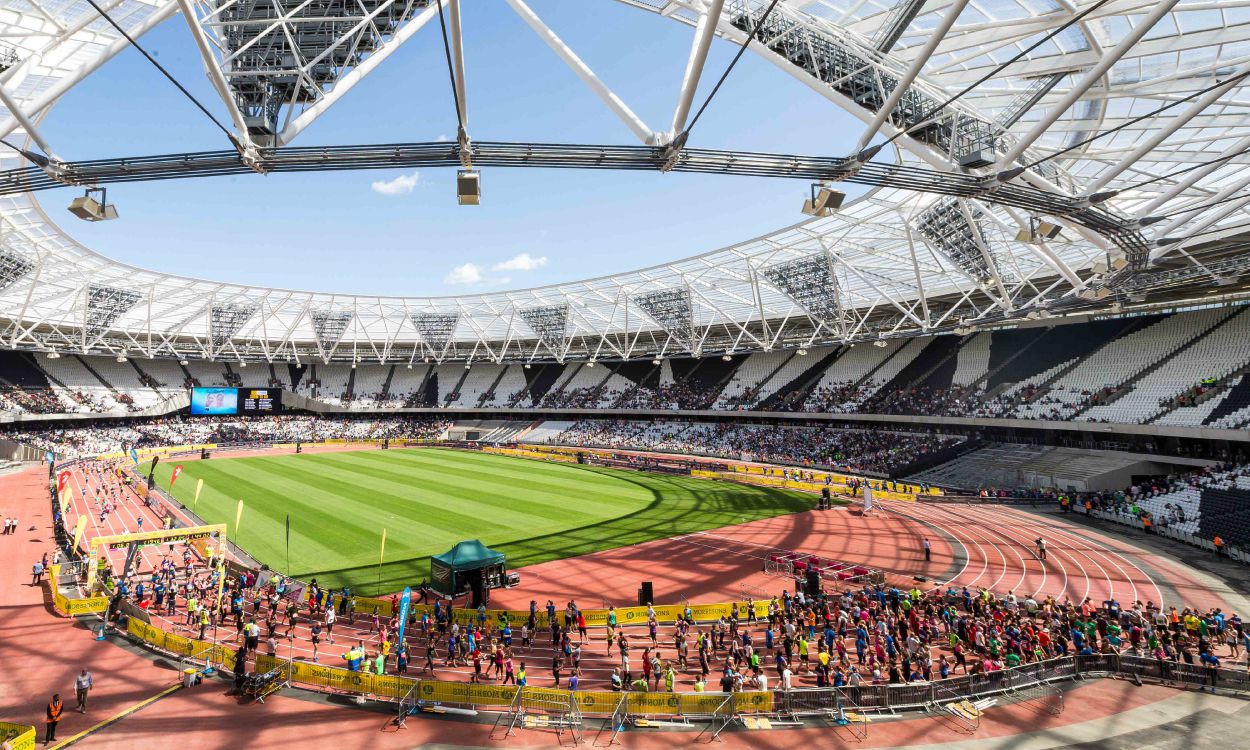 Never mind the sub-two-hour marathon. On Sunday in the Queen Elizabeth Olympic Park we were reminded just how good the current world records are for 26.2 miles.

Illustrating just how good the world record marks are, the GB women’s performance was almost a quarter of an hour slower than the world record held by Paula Radcliffe, who was in the Olympic Stadium to encourage and inspire 17,000 people taking part in the Morrisons Great Newham London Run 10km or family 2km.

On a day drenched in sunshine, the venue turned into the people’s stadium as it rolled out a unique red carpet in the shape of the synthetic, all-weather track that was graced by Usain Bolt, Mo Farah, Jessica Ennis-Hill and others three years ago.

Setting off in several waves, the runners snaked their way through the Olympic Park before finishing in the stadium, some with a sprint and others with a shuffle as they sweated under the bright sunshine.

Appropriately, 10km winner John Beattie hails from the same Newham & Essex Beagles club that Farah is a member of. He ran 31:44 and said: “It’s a fantastic event in an incredible stadium so I’ll remember it for a very long time.

“Mo Farah was one of the big winners here at London 2012 so it’s great that another Newham and Essex Beagle club runner should pick up the title here today. I could have run faster but wanted to really enjoy the experience. It’s been an incredible and amazing day.”

Fiona Thompson of Thames Valley Harriers was the fastest female in the 10km with 36:50 and said: “It’s really cool to run here and when you run through the stadium tunnel and hear the commentary of Mo Farah’s run in 2012.”

Busy with interviews and the job of setting her six ‘Radcliffe’s Great Runners’ on their way, the world marathon record-holder didn’t run the 10km herself but must have covered the distance by sprinting up and down the home straight encouraging finishers.

“I was thrilled to see thousands of runners of all ages and abilities take part,” she said. “Being in the stadium, where so many dreams came true in 2012, is really special. I’m so glad that people are having the opportunity to use this amazing venue.”

After the mass participation 10km came the relay – a unique challenge that saw teams of four complete 10,512m each, plus three 50m transition zones in the stadium, to make up the marathon distance.

Leading the way, a Kenyan team consisting of Mike Kigen, Cyprian Kotut, Dickson Chumba and Stephen Sambu ran 2:02:56 as the finishing flurry of anchorman Sambu, the Morrisons Great Manchester Run winner in May, saw the team dramatically squeeze inside the world record.

By this stage, Radcliffe was making her way to Font Romeu via Barcelona for a few days of running in the mountains before returning to London for the Anniversary Games on Friday.

Brendan Foster, meanwhile, from the organisers The Great Run Company, suggested the event had the potential to grow into a bigger festival of sport in coming years.

“Having 17,000 people running in the former Olympic Stadium has been wonderful and from the look on everyone’s face, it looks like they’ve had a fantastic time,” he said. “We’ve got some exciting ambitions for the Great Run series and if today is anything to go by, we’re very confident that this event will grow over the coming years.”

Entries are already open for the 2016 Morrisons Great Newham London Run at www.greatrun.org, where results for Sunday’s event can also be found.