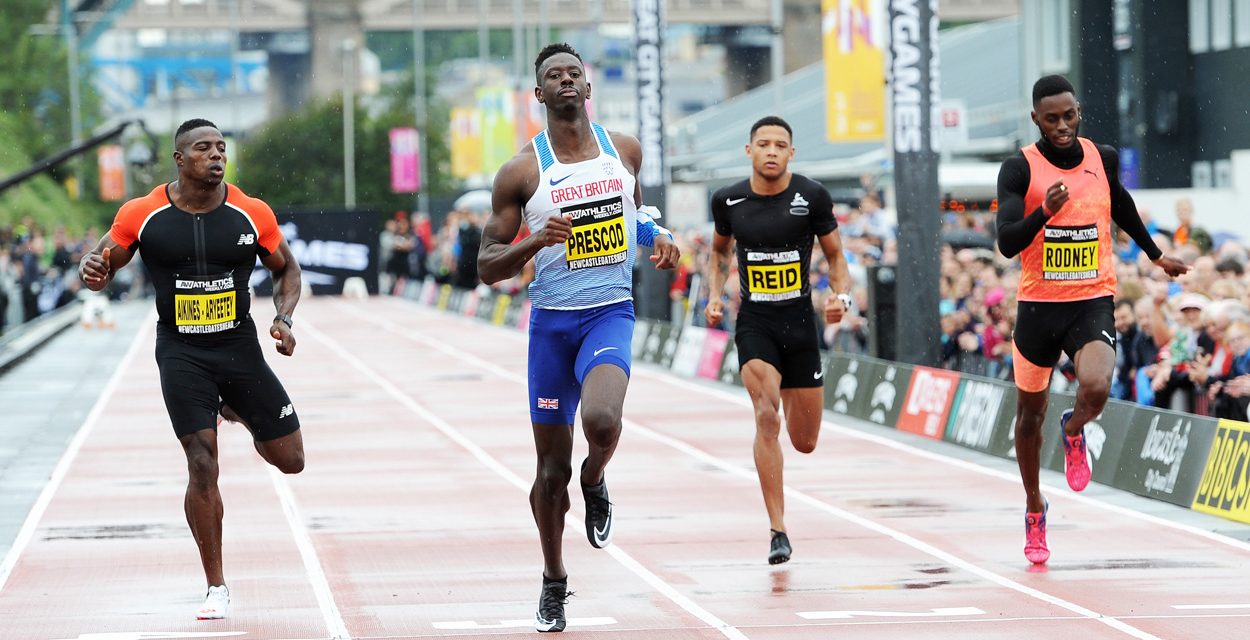 Many sprinters describe the 150m on a straight track as ‘never ending’ but Reece Prescod took the event in his stride to win convincingly in 14.87.

The 22-year-old has been in terrific form this season over 100m – winning the British title and clocking a PB of 9.94 – and on the Newcastle-Gateshead Quayside he beat Harry Aikines-Aryeetey by a quarter of a second and came within six hundredths of a second of Nethaneel Mitchell-Blake’s British best for the distance.

Despite having a busy year, Prescod has not raced 200m at all in 2018. Yet he was not short of speed endurance as he came home strongly.

“It was really fun,” said Prescod. “Everyone says the 150m is really long but I found it good. Usually in 100m I only get to express myself for 50-60m, so it was nicer to be running for a slightly longer distance.”

Great North CityGames 150m victory for @rprescod1 on his street athletics debut at the end of a successful season. He now takes a welcome break and says the slight disappointment he feels from this summer will fuel him for 2019 #GNCG2018 pic.twitter.com/VLfU4rmnx7

Dwayne Cowan emerged as the winner of the 500m despite not having run further than 300m in training this year. The 400m specialist clocked 59.84 to pip Spanish 800m runner Alvaro de Arriba as Irish middle-distance runner Mark English finished third.

“I was going to go out hard but at the start I was squeezed in and the guys just pushed me out the way,” said Cowan. “So I thought ‘just chill here’. I didn’t want to push anybody so I took it easy and then finished strong.”

Behind, Markhim Lonsdale, a local runner and former winner of the Junior Great North Run, was fifth, just ahead of Guy Learmonth, who had led through 400m in 47.03 but tied up in the final 100m.

Felix Streng has competed in a number of street athletics events in the past in Manchester and on Tyneside and on Saturday he clocked a CityGames record in the IPC 100m of 10.85 as he beat Jonnie Peacock – the Briton being a little rusty after a quiet year.

“I thought we were going to avoid the rain but then it started to rain as we were warming up,” said Streng. “My PB is 10.67 but for this time of the season it was a good time.”

One hurdler who enjoyed a great day, though, was Orlando Ortega of Spain. As the rain fell on the CityGames track, the 27-year-old won the 110m hurdles in 13.44 and, like many athletes at this time of year, the Olympic silver medallist’s thoughts immediately turned to his end-of-season holiday before he returns to training to prepare for the IAAF World Championships in Doha.

In addition, Greg Rutherford enjoyed the final long jump competition of his life as he finished third in a close contest behind winner Jack Roach.

Earlier, Jordan Williamsz won the men’s mile for the second successive year as the race was held in Stockton-on-Tees for the first time. Next year will see all the Great North CityGames events held in the centre of the town, too, as the whole event emigrates to Teesside.

» Full coverage from the Great North CityGames in the September 13 issue of AW. A report on women’s events can be found here