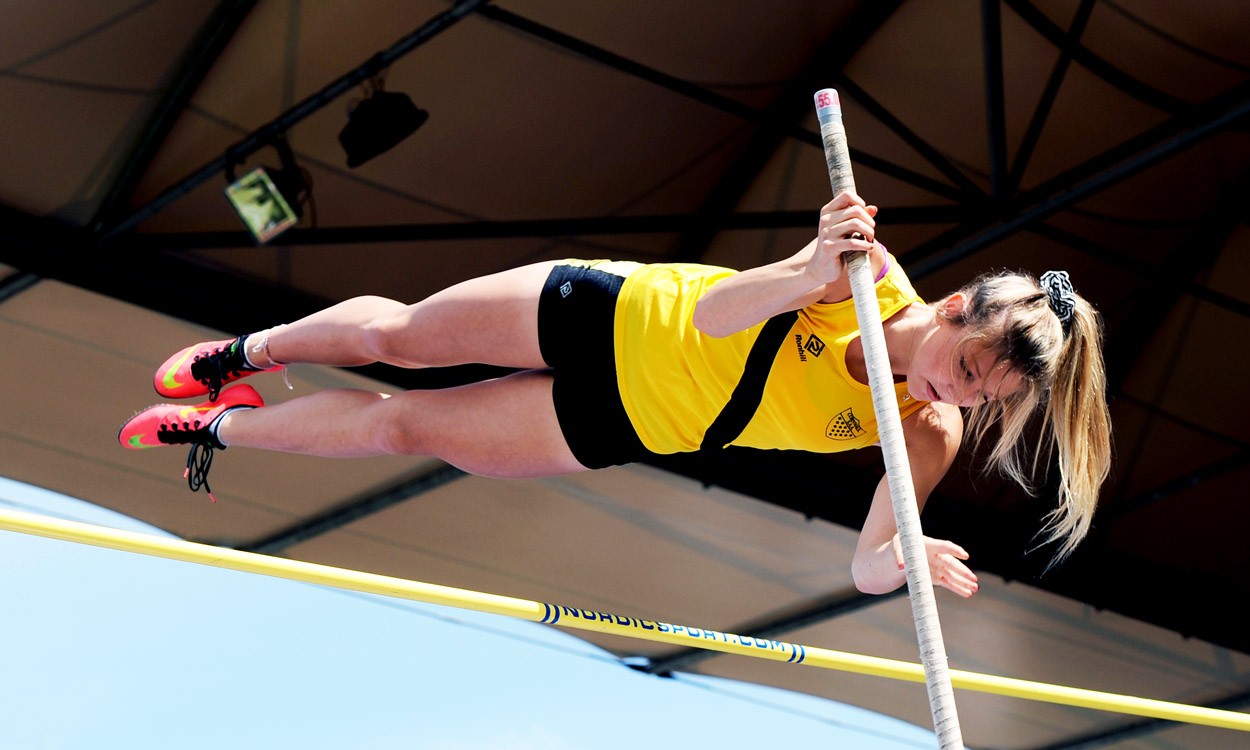 Molly Caudery pole vaulted 3.93m for a meeting best, while records also went in the hammer

Two championship records were broken on the opening day of the English Schools Championships in Gateshead on Friday.

Day one of two saw 60 finals – all in the field – at what is claimed to be the fourth largest athletics meeting in the world with around 2000 competitors.

The event missed some of the very best athletes in the country due to a clash with the IAAF World Youth Championships and European Junior Championships but nevertheless produced several strong performances.

Molly Caudery set a championship record in the intermediate girls’ pole vault with 3.93m. With another year left as an under-17, she is already fourth on the UK all-time age group rankings. After adding one centimetre to her PB, she needs another 17cm to equal the age-group record held by Lucy Bryan, a previous winner here.

She felt that on one of her unsuccessful attempts at 4.03m she vaulted over the bar but came down on to it.

Another championship record to go in a relatively new event was in the intermediate girls’ hammer. Katie Head (58.83m) and Katie Lambert (58.42m) bettered the record from last year in qualifying for Saturday’s final.

The best competition of the day was the senior boys’ high jump where Rory Dwyer and William Grimsey fought out a five-jump jump-off before agreeing to share gold. The pair share the top spot on the UK rankings this year with 2.12m and it was here that both athletes had three failures, having been inseparable on the field card up to that. In the jump-off, both athletes then failed once at 2.12m, succeeded at 2.10m, failed at 2.12m, cleared 2.10m and then failed at 2.12m before officials allowed them to share gold.

With a PB of 1.84m, Finley Castledine went to the top of the year’s under-15 rankings in the high jump alongside the athlete he beat into the silver medal position, Kaya Walker, who jumped 1.81m.

Eleanor Broome caused a surprise in the intermediate girls’ long jump as she beat Holly Mills, the 15-year-old who comfortably had the World Youth qualifying mark but was too young to be picked. Broome was four centimetres short of her PB with 5.94m into a headwind of 2.5m/sec. Mills, who is 11th on the UK under-17 all-time list with 6.21m, had a best of 5.87m, which was into a 3.1m/sec.

Emily Gargan, who heads the under-17 UK triple jump rankings this year, was just 21cm down on her best as she took gold with 12.05m.

Meanwhile, the senior triple gold went to Kerri Davidson, who defended her title with a wind-assisted 12.77m on the eve of going to the United States to study at Princeton University.

In the junior boys’ long jump Jack Perry recorded a best of 6.22m as the top four athletes set PBs.

Among the throws highlights, Alfie Scopes set a PB to win the intermediate boys’ discus with 49.84m and Kai Jones secured a third English Schools title, winning the senior boys’ shot with 16.34m.