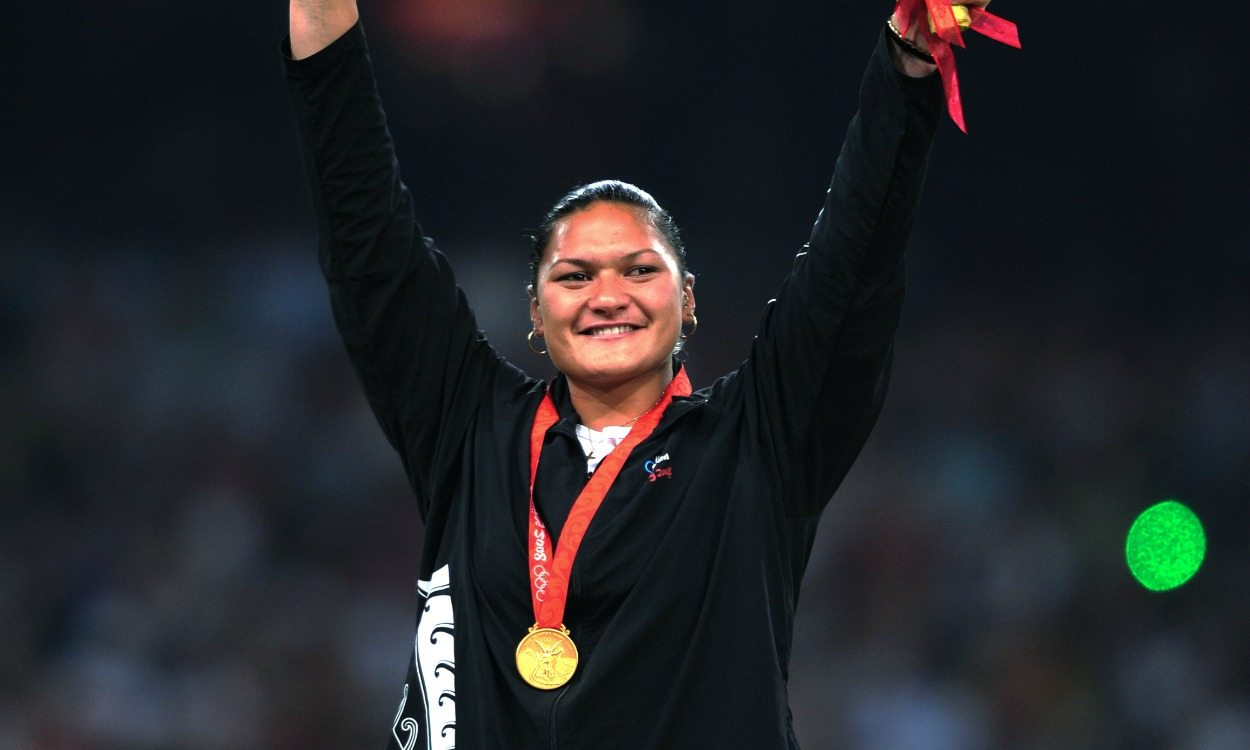 The women’s shot had to wait until post World War II before making its debut and it has been an event traditionally dominated by the Soviet bloc but one also tainted by drugs. However, in Rio, there is every chance that Valerie Adams could make history and become the first thrower to win three gold medals in a row.

She didn’t compete in the world championships in Beijing last summer after surgery but the New Zealander will start a big favourite should she be fit and in Brazil.

The inaugural Olympic shot came 10 years after it had made its debut in the European Championships in 1938.

The first winner was France’s Micheline Ostermeyer, who won the title easily a few days after winning the discus, with a throw of 13.75, She was a versatile athlete and was also able to finish third in the high jump.

However, even more uniquely, a few months before the London Games, she had graduated from the Paris Conservatory of Music with high honours as a pianist and after her win, she celebrated by playing a Beethoven recital at the French team headquarters.

The Soviets were absent in 1948 but made up for it in 1952 by taking three of the first four spots in Helsinki. Galina Zybina dominated and already assured of gold, she threw a world record 15.28m with her final throw. It was history’s first 50-foot throw.

Zybina had almost died of cold and starvation in the War and her mother and brother had both died. The Soviet looked to be defending her title successfully in Melbourne in 1956 as she led in the final round with a 16.53m throw but the world record-holder was denied by team-mate Tamara Tyshkevich’s 16.59m last throw.

The title stayed in Soviet hands in Rome in 1960. Tamara Press was the world record-holder with 17.78m and she won by a big margin of 71 centimetres from East Germany’s Johanna Luttge with an Olympic record 17.32m.

Zybina could only finish seventh in her third Olympics but she completed the set with a bronze in Tokyo in 1964. Some would say suspiciously throwing almost a metre further than she had in any previous Olympics with a 17.45m effort. It wasn’t enough for gold though as Press retained her title with another Olympic record 18.14m. Press, who along with her sister Irina had set 26 world records and won five Olympic golds, retired as soon as sex tests were introduced in international competition.

The Soviets’ string of victories ended in Mexico in 1968. East Germany gained a one-two with Margitta Gummel improving her world record from 18.87m to a staggering 19.61m. Gummel was later confirmed as being on a drugs programme.

She improved to 20.22m in Munich in 1972 but was well beaten by Nadezhda Chizhova’s 21.03m world record that put the Soviets back on top. Chizhova, who was third in Mexico, with a throw almost three metres less, won four successive European titles between 1966 and 1974, completed her Olympic medal set with a silver in Montreal in 1976. She had previously lost her world record to Ivanka Khristova and in Canada, she also lost her Olympic record to the Bulgarian’s 21.16m.

Four years later that distance wouldn’t have even been good enough for a medal in Moscow – see most memorable contests.

The Soviet boycott ensured most of the world’s best throwers were absent in Los Angeles but it was still a good contest as West German optician Claudia Losch saw her chance of victory ensured with a 20.48m final throw to pip Romanian Mihaela Login by a centimetre.

Even with the reduced distances there was still a drugs connection as bronze medallist Gael Martin of Australia failed
a drugs test in 1981 and then another in 1988 after she had turned to power-lifting.

The distances were back to 22 metres temporarily in Seoul in 1988 when the then world record-holder Natalya Lisovskaya dominated with a 22.24m throw and had the best six throws.

Svetlana Krivelyova made a big improvement to win gold for Russia in 1992 to beat China’s Huang Zhihong with a PB 21.06m.

Thereafter distances drifted to below 21 metres with 1996 and 2000 champions Astrid Kumbernuss and Yanina Korolchik both throwing 20.56m.

It did appear the 2004 gold medal winner was back over 21 metres when Irina Korzhanenko dominated with the four longest throws and was the only thrower over 20 metres as she threw 21.06m. The Russian though failed a drugs test immediately after the event and was banned for life as she previously failed a drugs test in the 1999 World Indoor Championships. The gold went to Yumeileidi Cumba of Cuba. Nadezhda Ostapchuk would have won gold had she matched her 19.69m in the qualifying round but could only throw 19.01m to ultimately finish fourth.

In Beijing in 2008, Valerie Adams – then Vili – won comfortably with Ostapchuk third.

In the 2012 Games in London, Ostapchuk defeated Adams easily with a 21.36m but was another to fail a drugs test and Adams thus retained her title, albeit in disappointing circumstances and denied her victory ceremony in the London stadium.

Later it was revealed the revised 2004 bronze medallist Svetlana Krivelyova retrospectively lost her medal but the bronze hasn’t been reallocated. The revised result would see the bronze being awarded to Ostapchuk.

Ilona Slupianek, who had become the first East German to fail a doping test and missed the 1979 season, returned stronger than ever in 1980 and won with a still-standing Olympic record of 22.41m, which just missed her world record.

The worst of her six throws was equal to the best of silver medallist Svetlana Krachevskaya’s 21.42m and Margitta Puffe threw 21.20m for bronze. Nunu Abashidze of the home nation threw 21.15m and failed to win a medal but would have won the gold in 14 of the 17 finals.

British highlights have been rare and sporadic in the shot.

Bevis Reid finished eighth in London in 1948 with a 12.17m throw and that was Britain’s most successful result until the Los Angeles Games in 1984.

In a poor standard competition in California, Judy Oakes finished in fourth but a metre behind the medals with an 18.14m throw. Venissa Head finished sixth in the same competition.

Oakes, easily Britain’s greatest in the event, also made the final in 1996 in Athens where she finished eleventh.

» For the full Olympic history: Women’s shot put feature, including a complete list of medallists and further facts and stats, see the November 12, 2015, edition of AW magazine