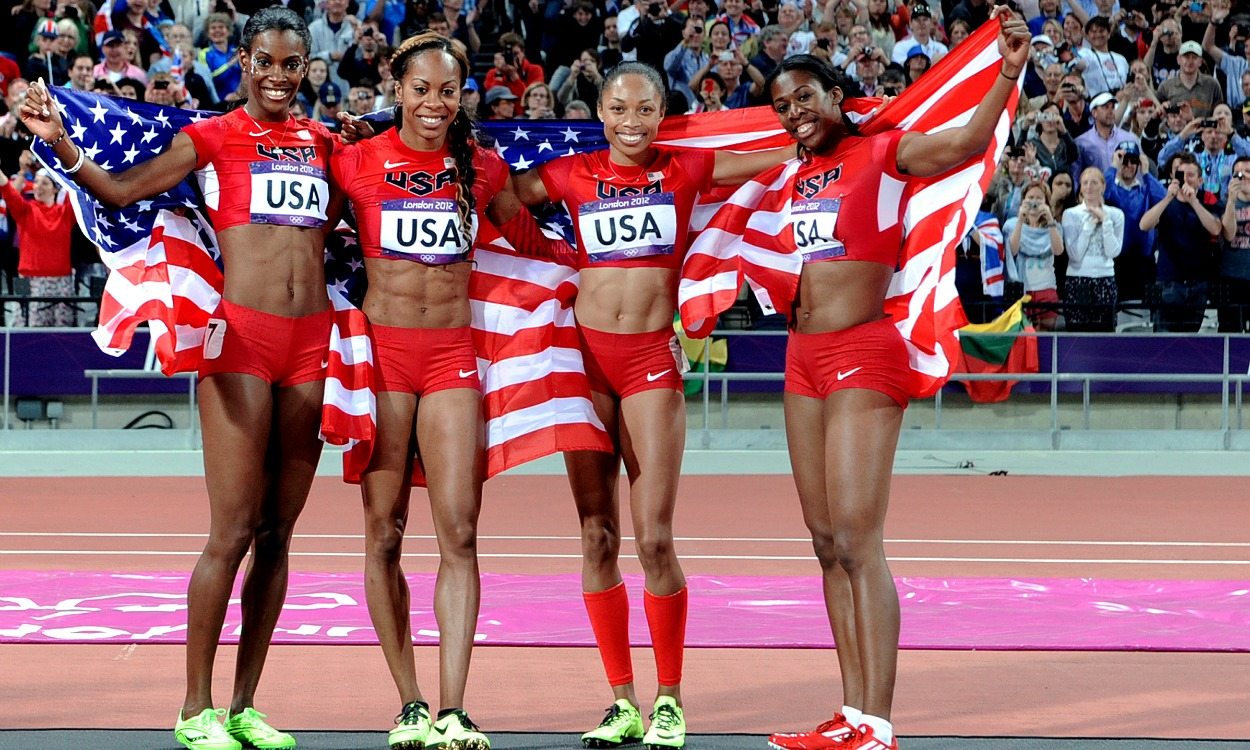 In a continuing series, Steve Smythe looks back at the women’s relay events at the Olympic Games

With the second and third from the individual race, Canada proved too strong for the Americans and they won easily in 48.4 as the first four bettered the previous mark of 49.8. That mark stayed as the record until Los Angeles in 1932 when again the first four broke the old record. It was closer this time, though, as USA edged Canada with 46.9 to their rival’s 47.0.

In Berlin in 1936, the hosts were big favourites and they improved their own world record of 46.5 to 46.4 in the heats. Watched by Adolf Hitler, they were well clear in the final at the last changeover, but their anchor, Ilse Dorlfedt, dropped the baton. USA, with 1928 100m champion Elizabeth Robinson in the team, won the gold medal with the same winning time as four years earlier.

Twelve years later, the Germans’ heat time remained the world and Olympic record and it wasn’t even remotely challenged in London in 1948. Taking the baton in fourth place, Netherlands’ Fanny Blankers-Koen burst through to win her fourth gold medal of the Games in a time of 47.5.

Germany’s 16-year-old world record finally fell at Helsinki in 1952 as Australia ran 46.1 in the first heat. However, in the final, they could only finish fifth as they messed up the final relay changeover in the race. The gold went to USA’s 45.9, with the team including the youngest ever track gold medallist, 15-year-old Barbara Jones. Germany shared the winning time.

Australia again broke the world record in the heats in Melbourne in 1956 with a time of 44.9, but this time they improved in the final to win in 44.5. The USA team, with a quartet from Tennessee State, improved the world mark to 44.4 in the 1960 Rome semi-finals but ran a sloppy final and it took a strong anchor from double sprint champion Wilma Rudolph for them to win in 44.5.

In Tokyo in 1964, Poland won what was at the time a world record 43.6 with the great Irena Kirszenstein – later Szewinska – in their team. However, they later lost the record when Ewa Klobukowska failed a sex test.

In Mexico in 1968, aided by the altitude, USA set a world record of 43.4 in the first round and that was equalled by the Dutch in the next heat. In the final, though, the USA were a different class and, anchored by double champion Wyomia Tyus, they improved the record to 42.88.

It was a closer battle for gold in Munich in 1972. East Germany beat West Germany in the heats in 42.88, but in the final the West shocked the East as long jump champion Heide Rosendahl held off double sprint champion Renate Stecher. The time was a world record 42.81.

East Germany gained their revenge in the inaugural 4x400m final as individual 400m champion Monica Zehrt anchored the team to an overwhelming two-second victory in a world record 3:23.0.

They were even more dominant in Montreal in 1976 as they improved the record to a historic 3:19.23 as they took almost four seconds off the world record.

East Germany also won the 4x100m relay in Canada in 42.55, but only just from Germany as Barbel Eckert snatched victory. Stecher was in the team and won her sixth Olympic medal.

In Moscow in 1980, East Germany’s victory was more notable as they won by half a second in a world record 41.60.

There was a major shock, though, in the 4x400m in Russia. The Soviets’ Olga Nazarova set off with a 10-metre lead but world record-holder Marita Koch could only make up eight metres and the Soviets won in 3:20.2.

The top two were absent from Los Angeles in 1984 due to the boycott, but it didn’t affect the times as the USA won in an Olympic record 3:18.29 with Valerie Brisco- Hooks winning her third gold medal of the Games after her unique 200m and 400m double.

Less than an hour earlier they had also dominated the 4x100m, winning by more than a second in 41.65, which was just outside the world record. Chandra Cheeseborough was on both teams and became the first to win gold medals in both of the relay events.

Eastern Europe returned for 1988 – see “most memorable Olympics” below. The 1992 sprint relay in Barcelona was also exciting as USA’s Gwen Torrence edged past Irina Privalova of the Unified Team (the former Soviet Union states) on the final leg to win in 42.11 from her rival’s 42.16. Evelyn Ashford won her fourth gold medal – her third relay title.

Torrence contributed a strong relay leg to give the USA the lead in the 4x400m, but the Unified Team caught them and went clear in the last 60 metres. The time of 3:20.20 was five seconds down on their world record despite their stars from 1988, Nazarova and Bryzgina, returning. Three of their six-woman squad failed drug tests the following year.

In Atlanta in 1996, USA won the 4x100m for the fourth successive time in 41.96 with Bahamas pushing them close. They also won the 4x400m with Nigeria hot on their heels.

USA seemingly retained the long relay title in Sydney but the fastest leg of the race was by the now disgraced Marion Jones. They were later disqualified but an appeal by her team-mates to the Court of Arbitration for Sport saw them reinstated (minus Jones) and they are currently still shown as winners.

It was Jamaica who won the silver. They controversially included 40-year-old Merlene Ottey in their team, after she had been suspended for doping the previous year. Ottey ran a strong leg and won a women’s record eighth Olympic medal (three silver medals and five bronze). That was in addition to a number of near misses – she was one hundredth of a second from a medal in the 100m in Spain and Jamaica had failed to start the 1988 final and failed to finish in 1992 when almost certain medallists.

Like the 4x400m, a US team appeal to CAS means the 4x100m team have seemingly kept their bronze medal.

USA were perhaps also fortunate to keep their 4x400m title from Athens in 2004 as Crystal Cox, who ran in the heats, was later disqualified for a doping violation and had all her results back to December 2001 removed and her own medal withdrawn.

They were less lucky in the 4x100m as, after setting the fastest heat time in history of 41.67, in the final Jones failed to get the baton to Lauryn Williams in time and they were disqualified. Jamaica won in 41.73.

The Americans didn’t even survive the heats in Beijing in 2008, but then neither did other medal hopes Trinidad, Ukraine and France, while in the final, Jamaica, Poland and Britain also came to grief! Russia won the depleted final in a modest 42.31. The USA nevertheless won the 4x400m relay with the now Richards-Ross running a crucial final leg as they won in a fast 3:18.54.

They were even quicker in 2012 as they won easily in one of the fastest times in history of 3:16.87 with 400m champion Richard-Ross winning her third relay gold.

With Jamaica and Russia following it was the same medal order for the third successive Games and the fourth successive time the three nations won medals.

The 200m champion, Allyson Felix, was in both relay teams in London and also ran a superb leg in the 4x100m where the USA smashed the world record with a superb 40.82. They finished well clear of Jamaica’s 41.41, which, despite the distance back, was then the third fastest ever time behind USA’s and East Germany’s world records.

The USA retained their 4x100m title in Korea, but only just. In qualifying, they were lucky to not be disqualified after a last-changeover mix-up between Florence Griffith-Joyner and Evelyn Ashford and in the final they were over-cautious and lost metres at the changeover.

Ashford set off in third behind Russia, for whom Natalya Pomoschnikova suffered a hamstring pull, and Ashford’s great rival Marlies Gohr of East Germany. Ashford ran superbly and caught Gohr in the last 20 metres to win in 41.98. The Russian limped through to take bronze. Griffith-Joyner won her third title of the Games.

‘Flo-Jo’ returned 40 minutes later to run her first international 4x400m leg. It was one of the fastest ever splits and their US record time of 3:15.51 has not been beaten since, but she couldn’t win her fourth gold medal. Denean Howard (49.81) gave the USA a lead over Soviet 400m hurdles silver medallist Tatyana Ledovskaya (50.12). There was a shock second leg though as 400m bronze medallist Olga Nazarova stormed to a 47.82 clocking to open up a big lead over Diane Dixon’s 49.17.

On the third leg, 1984 400m champion Valerie Brisco’s 48.44 took a second out of Maria Pinighina’s 49.43 to bring USA back into contention and set Griffith-Joyner off less than a metre behind individual 400m champion Olga Bryzgina.

The American stayed a stride behind for the first 300 metres but, despite a 48.08 leg, couldn’t close on the Soviet, who pulled away slightly in the straight with a 47.80 leg as Russia won in a world record 3:15.17.

They were back in the medals with a bronze in 1952 and silver in 1956, but they failed to finish in Rome in 1960, despite a strong squad including double medallist Dorothy Hyman.

In the next three Olympics, they finished seventh or eighth, but they were back in the medals in Moscow in 1980 where they ran a fast 42.43.

In Russia, they also won a bronze in the 4x400m with 16-year-old Linsey MacDonald in their team.

In 1984, they finished fourth in the long relay, but might have fared better had their UK record-holder and bronze medallist Kathy Cook ran. Instead Cook ran in the 4x100m relay and won a bronze as three of the four returned from 1980.

Britain haven’t won a 4x100m medal since and didn’t even qualify for the 16 best teams in London 2012, but they should be in the medal hunt in Rio.

Britain gained another medal in the 4x400m, though, when anchored by 400m hurdles champion Sally Gunnell to bronze in Barcelona in 1992.

They should have probably won a medal in 2000 as they had two of the first four from the individual race, but they ended up sixth. They were also top-six in the three Games since.

» For the full Olympic history: Women’s relays feature, including a complete list of medallists and further facts and stats, see the June 9, 2016, edition of AW magazine