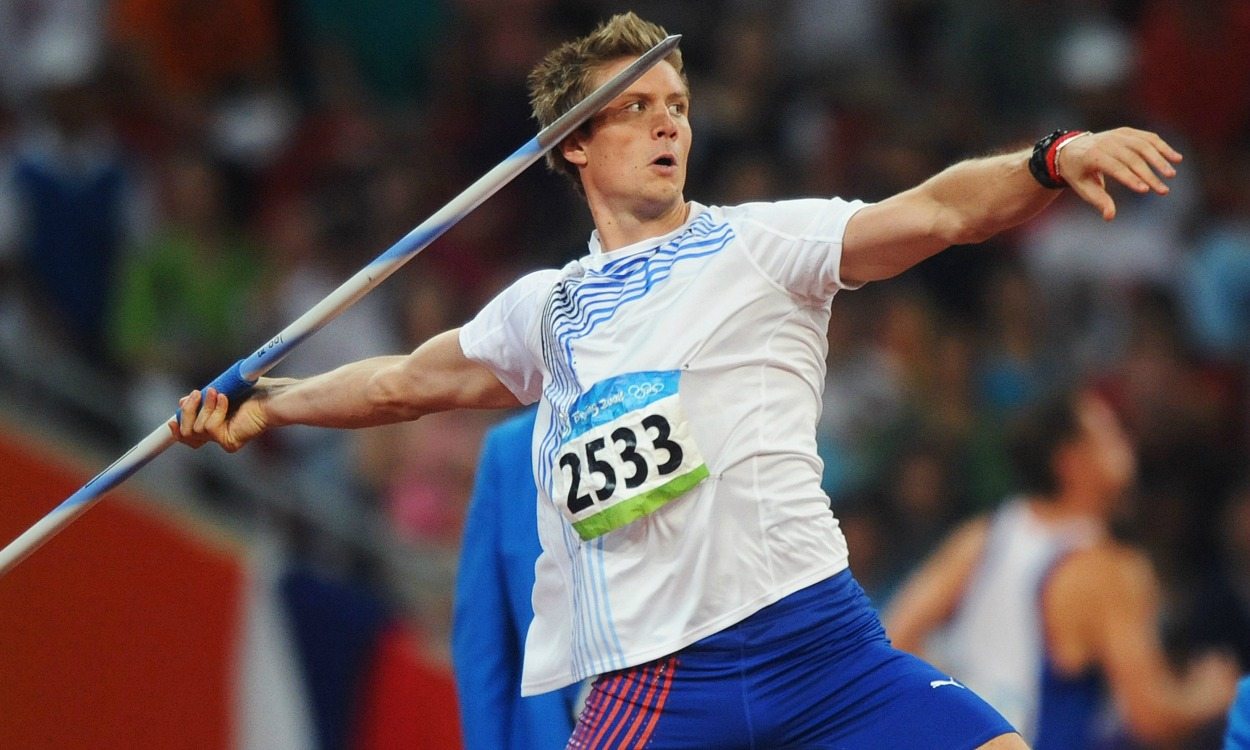 There was no javelin in the first few Olympics, though a freestyle event was included in the 1906 Games in Athens.

The event was dominated by Nordic athletes and the first final was made up of Swedes, Finns and Norwegians.

Eric Lemming, who had bossed the event since the turn of the century, won by eight metres with a world record 53.90m.

He retained his freestyle title in London in 1908 with 54.45m and won the first normal-style javelin event with another world record – 54.82m. Again only the Nordic countries competed and the javelin didn’t become an AAA Championships event until 1914.

The Stockholm policeman improved the record to 58.27m between Games and then returned to his home city for the 1912 event.

In front of a vociferous Swedish crowd he achieved the first 60m throw as his 60.64m gave him a two metre win over Finn Juha Saaristo.

A few days later the Finn broke the Swede’s record in the combined left and right-hand event and achieved the first 200 foot throw with his right hand – 61.00m. That event was only held once.

After the war, the Finns took control and in 1920 in Antwerp had the first four throwers. Jonni Myra came close to his world record with an Olympic best 65.78m. He retained his title in Paris in 1924, though the silver medallist, Gunnar Lindstrom, bettered Myra’s world record a few months after the Games.

The clear favourite in 1928 in Amsterdam was the Finn Eino Penttila, who had added three metres to the world record in 1927 with 69.88m. However, not at his best, he could only finish sixth as Sweden won another title through Erik Lindquist’s 66.60m Olympic mark.

Finland fared better in 1932 as they won all the medals, led by world record-holder Matti Jarvinen, who increased the Olympic record to 72.71m.

Jarvinen dominated the event and set 10 world records in his career but had a back injury in Berlin in 1936 and could finish only fifth.

Watched by Adolf Hitler and a chanting German crowd, Gerhard Stock was a surprise winner as his 71.84m bettered the Finns Yrjo Nikkanen and Kalervo Toivonen, who became the first Olympic 70m throwers not to win gold medals.

After the Second World War, Finland was still the dominant force and Tapio Rautavaara took the title in London with 69.77m. Two years later he won a world title in archery and later became a successful singer and actor.

Much to their disappointment in their home Games, the Finns could only manage a bronze medal in Helsinki in 1952. Surprisingly it was USA who dominated with Cyrus Young winning with an Olympic record 73.78m from team-mate William Miller.

Young improved his Olympic record in the 1956 Melbourne qualifying but couldn’t even make the last eight in the final. Norwegian Egil Danielsen was one of the favourites, having won 36 consecutive meetings, but was only lying sixth at halfway in the final. World record-holder Janusz Sidlo offered him his steel javelin – everyone else was throwing with wooden javelins – and a French competitor offered him a coffee, which he didn’t normally drink.

Whether it was the javelin or the caffeine is unclear, but the result was that he broke the world record by two metres and won the gold from Sidlo by nearly six metres with a historic 85.71m. He would never throw further and also failed to make the final in Rome in 1960.

The Pole Sidlo headed qualifying with 85.14m but he could only throw 76.46m in the final and finished eighth as the Soviet Viktor Tsybulenko won easily with a first-round 84.64m as wind and rain disrupted the throwers in latter rounds.

There was another surprise in Tokyo in 1964 as, in a close contest, Pauli Nevala, who wasn’t even the Finnish champion, shocked with an 82.66m win.

World record-holder Terje Pedersen, who had achieved history’s first 300 footer with a 91.72m throw just before the Games, could only achieve 72.10m. He missed out on making the final.

In Mexico in 1968 the favourite won for the first time in 36 years. World record-holder Janis Lusis was lying only second at the start of the last round but he snatched victory with a final-round 90.10m. Jorma Kinnunen came close with his final throw of 88.58m, while Gergely Kulcsar was also well over the previous Olympic record with 87.06m. In his fourth final Sidlo finished seventh.

Miklos Nemeth, who was seventh in 1972, was two years old when his father won hammer gold in London in 1948. After disappointing in the two previous Olympics, he wasn’t favoured for Montreal in 1976. However, with his first-round throw he stunned the opposition with a world record 94.58m.

It demoralised the opposition as no one could come within six metres of him with Hannu Siitonen the best of the rest.

A boycott-affected contest in Moscow in 1980 had controversy. Soviet Dainis Kula fouled his first two throws and most observers thought his third landed tail-first and then bounced. The Soviet officials declared it legal, giving him three more throws, during which he produced a clearly legal 91.20m, which gave him the gold. World record-holder Ferenci Paragi headed qualifying but could only finish 10th and, in Los Angeles in 1984, Tom Petranoff did likewise.

In the absence of the Eastern Bloc throwers, the American former world record-holder was a clear favourite but in the final, it was Arto Harkonen who won a modest standard event with 86.76m.

Finland took their eighth gold in Seoul in 1988. With the javelin specifications changed after Uwe Hohn’s 104.80m throw, distances were the lowest for 20 years. For much of the competition new world record-holder Jan Zelezny led, but with his final throw Tapio Korjus snatched the title by 16 centimetres with 84.28m. World champion Seppo Raty gave Finland another medal in third.

Zelezny set what he thought was a world record in 1992 but the mark was declared illegal just before that year’s Games in Barcelona.

Zelezny, who had disappointed in a number of major finals, was fired up for this one and he won easily with 89.66m. Raty was a distant second. World record-holder Steve Backley – see “British successes” below – finished third .

For Atlanta in 1996, the same three medallists returned but this time Raty dropped to third. Zelezny was by then dominant, having also won the 1993 and 1995 world titles and improved the world record to 98.48m. He won gold by less than a metre with 88.16m.

Sydney 2000 had the same one-two, though Zelezny faced his toughest battle thus far from Backley as he won a record third successive gold and fourth medal with 90.17m.

With Zelezny retired, there was a surprise in Athens in 2004. Andreas Thorkildsen had only been 11th in the World Championships and was only ninth in qualifying but a PB 86.50m in the second round sufficed for the gold medal. American Breaux Greer had thrown 87.25m in qualifying but injured his knee badly in the process and was last in the final with 74.36m. Russian Sergey Makarov won his second successive bronze. His father, Aleksandr, had won silver in 1980.

The Norwegian struggled in qualifying in Beijing in 2008 and only qualified by half a metre with his final throw of just 79.85m.

In the final, though, Thorkildsen was in command throughout and sealed gold with an Olympic record 90.57m in the fifth round.

In London in 2012, the defending champion, out to equal Zelezny’s three gold medals, had a very good qualifying with a 84.47m throw but was two metres down on that in the final and could only finish sixth.

Vitezslav Vesely headed qualifying with a world-leading 88.34m but he too finished out of the medals as Keshorn Walcott, who only qualified 10th, won a shocking gold by just seven centimetres with a 84.58m Trinidad national record.

Soviet Janis Lusis, who won gold in Mexico in 1968, was from Latvia and he dominated javelin throwing over the next four years and was clear favourite for Munich in 1972, although the home crowd were hopeful Klaus Wolfermann could push him.

Lusis led the early rounds with the German his only near challenger but then in the fifth round, Wolfermann took the lead with a PB 90.48m.

Lusis had one last chance to respond and as in Mexico, he showed his competitive mettle but it was measured as 90.46m – which as distances were measured to the nearest 2cm was the closest he could go without winning. Had he equalled it, he would have won on his second best throw.

Britain made little impression in the javelin in the Olympics and had failed to have a top-eight finalist until David Ottley made the most of the Soviet Bloc Olympic boycott in Los Angeles in 2004.

Ottley led with a near PB 85.74m and was ahead after three rounds but he lost the lead and title in the fourth round as Harkonen threw a metre further with 86.76m. The Briton finished two metres ahead of the bronze medallist and three metres up on fourth. Roald Bradstock finished seventh.

Steve Backley became one of the world’s greatest throwers a few years later and he won the bronze medal in 1992, albeit six metres down on the all-conquering Jan Zelezny.

The Briton gave him a much better contest in Atlanta in 1996, heading the contest after a first-round 87.44m and finishing just 72 centimetres down on the Czech.

In Sydney in 2000, Backley pushed him even further. His second-round throw of 89.85m was an Olympic record and his best for eight years but Zelezny responded in the next round with 90.17m to snatch gold by 32 centimetres. Backley thus won his third Olympic medal.

The Cambridge Harrier, who also finished second in the 1995 and 1997 World Championships, fared better against Zelezny in the European Championships and won four successive gold medals between 1990 and 2002.

He finished fourth in his final Olympics in 2004, just 82 centimetres down on second.

» For the full Olympic history: Men’s javelin feature, including a complete list of medallists and further facts and stats, see the May 12, 2016, edition of AW magazine