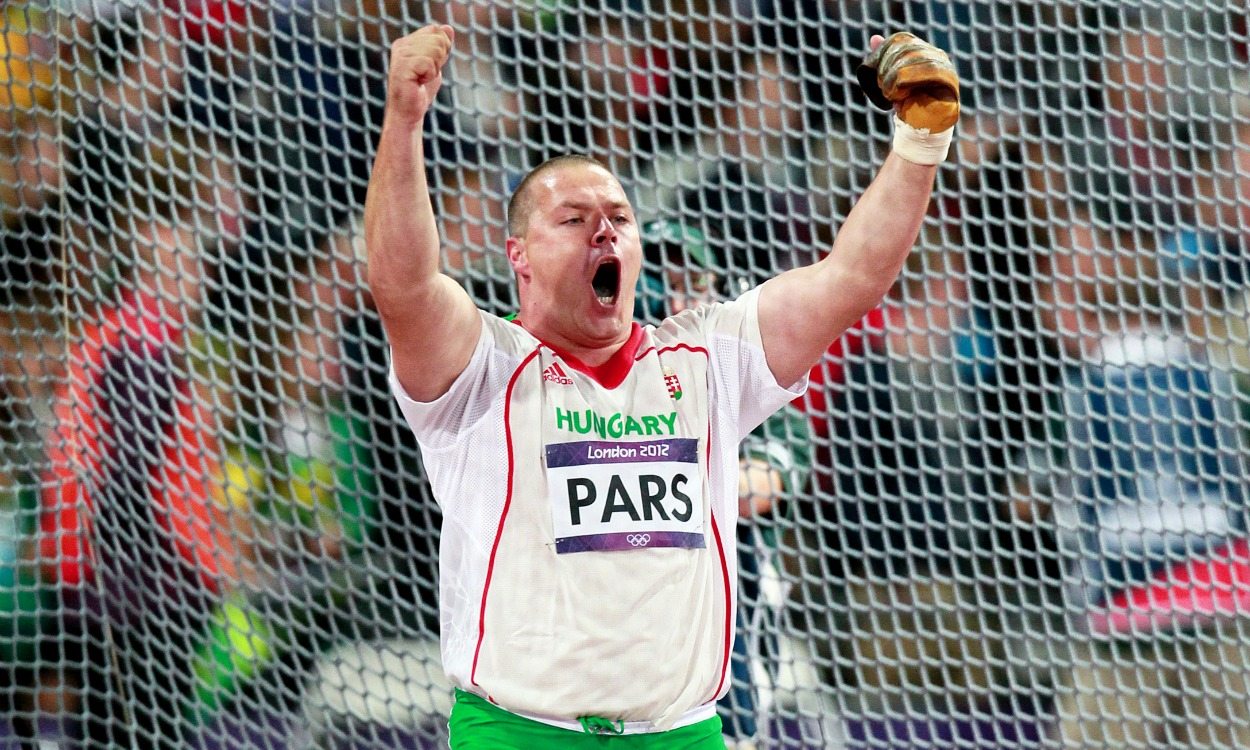 In a continuing series, Steve Smythe looks back at the men’s hammer at the Olympics

The event wasn’t held in Athens in 1896 and debuted in Paris in 1900. The easy winner was Irish-born John Flanagan, who emigrated to the USA in 1897 and became a New York policeman. He won by four metres with 51.01m to go close to his world record.

He continued to dominate his event in the next few years but was given a closer contest at St Louis in 1904 as he improved his Olympic mark to 51.23m to win by a metre. A second USA medal sweep was not surprising as all six finalists were American.

The hammer was again missing from Athens in 1906 but was back in London in 1908 and again America dominated with six of the top seven and another top three.

Flanagan won again with 51.93m but had to work hard again. The margin was down to 75 centimetres as his final-round throw defeated world record-holder Matthew McGrath.

The following year Flanagan, aged 41, became the oldest world record-breaker in any athletics event. McGrath, another Irish-born policeman, regained his world record and won in Stockholm in 1912 by the massive margin of six metres with an Olympic record of 54.74m. Canadian Duncan Gillis made history with silver as he became the first non-American hammer medallist.

McGrath was injured in Antwerp in 1920 and could only take a few throws in finishing in fifth. The title went to yet another Irish American. Pat Ryan, who threw a 57.77m world best in 1913 which would last as a world record for 25 years and a US one for 40, won easily with 52.87m.

McGrath returned to form for Paris in 1924 and won silver at the age of 45. He was beaten by Fred Tootell, who injured his foot at the US trials and had to wear a cast until the day before the Olympics in Paris. With 53.29m, he became the first American-born winner.

USA failed to win gold or silver in Amsterdam in 1928 as in a tight contest, Ireland’s Patrick Callaghan won by just 10 centimetres with 53.92m, having only taken up the event a year earlier.

Callaghan won in 1928 with his second-to-last throw and in Los Angeles in 1932 he waited until his last throw to take the lead with 53.92m. He denied Ville Porhola, who had won the shot in the 1920 Olympics, the gold.

The American and Irish dominance finally ended in Berlin in 1936 as the host nation’s Karl Hein won with a 56.49m PB to finally break McGrath’s 24-year-old Olympic mark.

After the war, it was Hungary’s turn to dominate. Imre Nemeth, who had increased the world record to 59.02m before the Games, won clearly with 56.07m.

Nemeth returned in Helsinki in 1952 but could only finish third as his 20-year-old protégé Jozsef Csermak threw 60.34m, the first ever 60m-plus mark. The first five bettered the previous Olympic best.

The Rome 1960 title went to Soviet Vasily Rudenkov, who broke the Olympic record in qualifying and then improved to 67.10m to dominate the final.

Another Soviet, Belarusian Romuald Klim, won in Tokyo in 1964 as he upped the Olympic mark to 69.74m.

The Hungarian Gyula Zsivotzky was a close second and in 1957 he improved the world record by an astonishing two and half metres to 73.74m. Just before the Games he added two centimetres but, having lost to Klim nine successive times, he wasn’t favourite for Mexico in 1968.

Klim held the advantage after four rounds and looked to have the psychological edge, but the Hungarian threw close to the world record with 73.36m to edge Klim by eight centimetres.

Zsivotzky was only fifth in Munich 1972 as Soviet Anatoly Bondarchuk won with an Olympic mark of 75.50m sealed in the opening round.

In 1975 Karl-Hans Riehm broke the previous world record with all six throws in one series, but in Montreal in 1976 the West German was unable to prevent a Soviet clean sweep.

The title went to exciting 21-year-old talent Yuri Sedykh who improved the Olympic mark to 77.2m with Bondarchuk third.

Sedykh was in even better form in Moscow in 1980 and he not only broke the Olympic mark but set a world record of 81.80m with his first throw. The previous world record-holder, Sergei Litvinov, finished second with 80.64m.

Riehm, who had thrown over 80 metres the day before the Olympics, couldn’t compete in Moscow because of the boycott.

He was there in Los Angeles in 1984, but missing this time were the Soviets, including Sedykh, who had thrown a sensational 86.34m earlier in the year.

With 11 of the 12 top-ranked throwers absent from Los Angeles, the Finn Juha Tiainen narrowly won with 78.08m from the German’s 77.98m. The original fourth-placer, Gianpaolo Urlando, was disqualified for excessive testosterone.

The Soviets were back in Seoul in 1988 and, although the 1980 medallists were in the medals again, it was a different order. Sergei Litvinov had won the first two World Championships in 1983 and 1987 and he maintained his current dominance over Sedykh as he won with an 84.80m first-round throw. Sedykh also shattered the previous Olympic record with 83.76m and Rolf Haber became the first to throw 80 metres in the Olympics and not win a medal.

It was a Soviet clean sweep of sorts in Barcelona in 1992 but after the union’s break-up gold went to Andrei Abduvaliyev of Tajikistan from Igor Astapkovich of Belarus. The latter had beaten his rival 8-0 previously that year, but Abduvaliyev shocked his rival with a fourth-round 82.54m. Bronze medallist Igor Nikulin was the son of the 1964 fourth-placer Yuri.

In Atlanta in 1996, Balazs Kiss led for most of the competition and took gold with 81.24m. In the end he won narrowly. Lance Deal thought he was eliminated after three rounds when he was in equal eighth with the inferior second throw. However, the rules didn’t specify this and nine went forward. He was still eighth after five rounds but a final-round 81.12m moved him up to second and threatened Kiss.

In Sydney 2000, most of the favourites failed to make it through to the final, including Deal, the 1997 world champion, Heinz Weis, all the 1999 world medallists and the world No.1 Gilles Dupray. Gold went to the Pole Szymon Ziolkowski, who had only been tenth in 1996 with the sole 80m throw.

In Athens, Adrian Annus appeared to have given Hungary the gold medal with 83.19m. However, his compatriot discus thrower Robert Fazekas was disqualified after a bag of urine was found on his body and, as Hungarian athletes came under growing suspicions, Annus refused to turn up for a second drugs test and was disqualified.

The title passed on to Japan’s Koji Murofushi, whose promotion to first ensured he had a three-metre winning margin – the biggest for 84 years.

The 2008 event was controversial, although not in terms of the gold medal as Slovenian Primoz Kozmus, who was sixth in 2004, was an undisputed winner with an 82.02m second-round throw the best of six marks over 80 metres.

The Belarusian pair of Vadim Devyatovski and Ivan Tikhon were originally second and third with respective 81.61m and 81.51m throws. However, they were both disqualified later in the year for excessive testosterone and the medals re-awarded to Krisztian Pars and Murofushi.

Two years later the Court of Arbitration for Sport ruled that they should get their medals back owing to errors in the Chinese lab-testing. This was complicated further, though, by re-testing of the 2004 samples. Tikhon, who was the revised second after Annus’s disqualification, was retrospectively disqualified in 2012 as methandienone was found in his sample. The other medals haven’t yet been reallocated and Ezref Apak remains third.

If Apak is promoted, the beneficiary would be Devyatovski, who had already failed a test and taken legal action to get his medal back!

After the 1952 Games in Helsinki, the event was dominated by Soviet Belarusian Mikhail Krivonosov, who had had three no-throws in Helsinki and set six world records between 1954 and 1956. However, just before the Games, American Hal Connolly advanced the world record to 68.54m.

Neither of the favourites were at their best in Australia, but they had a good contest and Connolly’s fifth-round 63.19m overhauled the Soviet by just 16 centimetres.

More attention went to Connolly, though, for his ‘Cold War’ romance in Melbourne with Olympic discus champion Olga Fitikova of the Czech Republic, whom he later married.

Connolly improved his world mark to 70.33m but was injured in Rome in 1960 and could finish only eighth.

The hammer has not been an entirely successful event for Britain over the years. The only medal came in Paris in 1924. Malcolm Nokes won a bronze, just 13 centimetres ahead of fourth with 48.87m.

It was 52 years before Britain even had an athlete in the top eight.

Scottish thrower Chris Black had his greatest competition to finish seventh with 73.18m behind three Soviets and three Germans in 1976.

Aided by the Soviet boycott and a drugs disqualification, Bob Weir was eighth in 1984 with 72.62m.

» For the full Olympic history: Men’s hammer feature, including a complete list of medallists and further facts and stats, see the May 26, 2016, edition of AW magazine