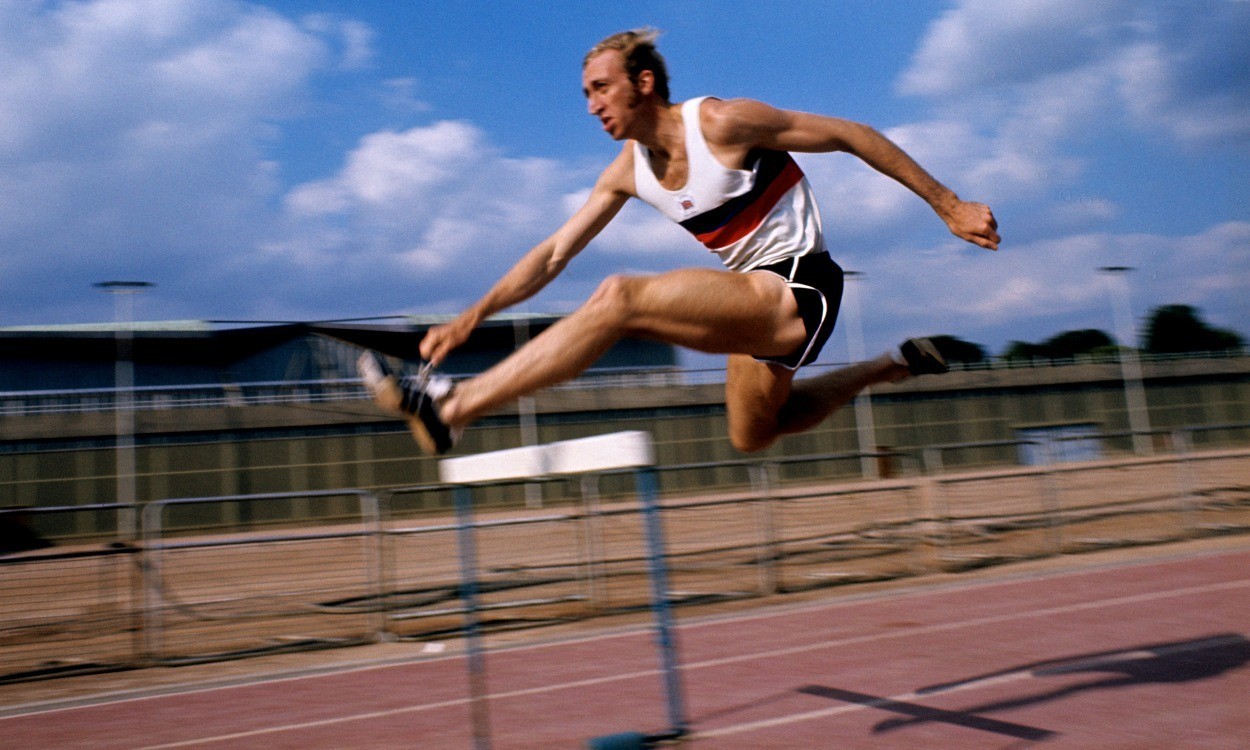 David Hemery gives AW an insight into the training that saw him bring back 400m hurdles gold in a world record time of 48.12 from the 1968 Olympics

Having been a student at Boston University and been through the NCAA system, David Hemery was used to racing regularly. His build-up to the 1968 season was little different, as the 1966 Commonwealth 120 yards hurdles champion raced the cross country, indoor and outdoor seasons for his university, often including multiple events.

“That sounds like a lot of rest but, as Istvan Balyi points out, adaptation takes place in recovery time,” explains Hemery. “All of my competitions were full effort and often multiple events indoors and out. I often raced a 4x400m at the end or sometimes 4x800m.

“The indoor individual events always included the 600 yards and occasionally 1000 yards, as well as the sprint hurdles,” he adds.

It might shock many 400m hurdlers today to know that, such was Hemery’s emphasis on building a strong aerobic base, he would regularly complete 10 miles at a fraction under 6:00 pace. The longer runs did not seem to hamper his speed either, as Hemery went on to retain his Commonwealth sprint hurdles title in 1970.

Speaking of his winter training programme, he reveals: “Throughout the year there was a shift of emphasis. I started with lots of steady longer runs and some speed hills or sprinting up sand dunes, which were among my toughest training sessions, through to mostly fast race-pace work in the outdoor season. Most of the early track work totalled 2500-3000m, which could have been in the form of 30x100m, 10x300m, 6x400m or 3x800m.”

The number dropped as the pace was increased so, by the time of the racing season, Hemery would be running 3x400m or 3x2x300m, the latter with a bend walk in between, then two laps slow walk to make up approximately 10 minutes rest between sets.

Aside from his sand dune winter training sessions, Hemery recalls one other particular ‘killer’ training session, which he would do a few weeks before a big race. It consisted of a 500 yards over 12 hurdles. What made it so hard was as much the psychological as physical element.

“Compared with multiple hills and particularly sand dune sessions in the autumn and winter, this session was not hard physically. It took pace judgment, concentration and the will to hold on to the pace,” says Hemery. He also knew that if he could go through 400m in sub-50 on the way to a 500 yards hurdles, particularly at a stage in his training programme when he was yet to introduce the fastest training sessions, racing a 400m hurdles would feel short psychologically and he would be able to go quicker.

Before Mexico in 1968, Hemery completed this training session at Crystal Palace and 1968 Olympic 400m and 1972 Olympic 800m runner, Colin Campbell, ran beside Hemery to encourage him to maintain pace in the second half.

“The 11th hurdle was placed 35 metres after number 10 and 35 metres further on was the 12th. At around the eighth hurdle, I saw Colin check back on his pace and that helped immensely to dig deeper to hold my pace. I went through 400m, having already cleared the 11th hurdle in 49.8.

Producing that time in training, purely based on strength and speed endurance, I knew that I was capable of running well under 49.0, particularly as I was leaving the top-end speed work until 10 days before leaving for Mexico and I would have four weeks of fast training sessions out there,” he says.

Once in Mexico, Hemery hit the fast training sessions and he felt his speed came on brilliantly in the warmer climes. The altitude reduced the number of reps he could do without depleting reserves, but he targeted race pace and ensured he completed one good effort daily over seven or eight hurdles or a 600m run.

“A few days before the heats I ran two runs to the fifth hurdle and was timed to 200m,” he says. “John Cooper, who was a silver medallist in the Tokyo 1964 Olympics, kindly offered to run on the lane inside me on the flat to help with my speed. I ran the first as hard as I could, under control, in 22.2 at 200m. The second was run at what I hoped would be race pace if the weather was good on the day of the final. That came out at 22.8 at 200m.”

Hemery also outlines another training session that he used to like to do close to a big race. “A useful indicator of what time is possible for 400m hurdles is a session where the first half is on the flat running at the pace that you would like to run over the hurdles in the upcoming competition,” he says. “Placing a T-shirt across the track where the fifth hurdle should be and hurdling that ensures the strides are right into the sixth to the finish, the second half being over the hurdles.”

Prior to the 1972 Munich Olympics, where he took the bronze, Hemery ran 22.8 plus 24.7 for 47.5. He says: “Issues of injury hurting my endurance training for three rounds plus negative visualisation killed my attempt to retain the title in Munich. It still hurts that the latter was under my control and the opposite of how I prepared for Mexico.”

Winter training was where Hemery put in the long, hard sessions to build stamina. However, he adds: “I seriously overdid the endurance work in the build-up to 1972. For three months, I averaged just under 60 miles a week, in addition to weight sessions, sand dunes and speed hills weekly. Given a chance to start again, I would certainly increase the reps and lower the distance that I did in 1971-1972.”

Reflecting on his ‘killer’ training sessions, Hemery recalls the precise words that his coach would offer to serve as motivation. “Getting through killer sessions in the winter and very early spring, the coach would say, ‘Just take the first step’, which is of course the hardest,” remembers Hemery. Once he had started running, he found he would often surprise himself with just how much more hard effort was possible.

Early-summer season: 3x2x300m, averaging 36 seconds with a bend walk between runs and 10 minutes rest between sets.