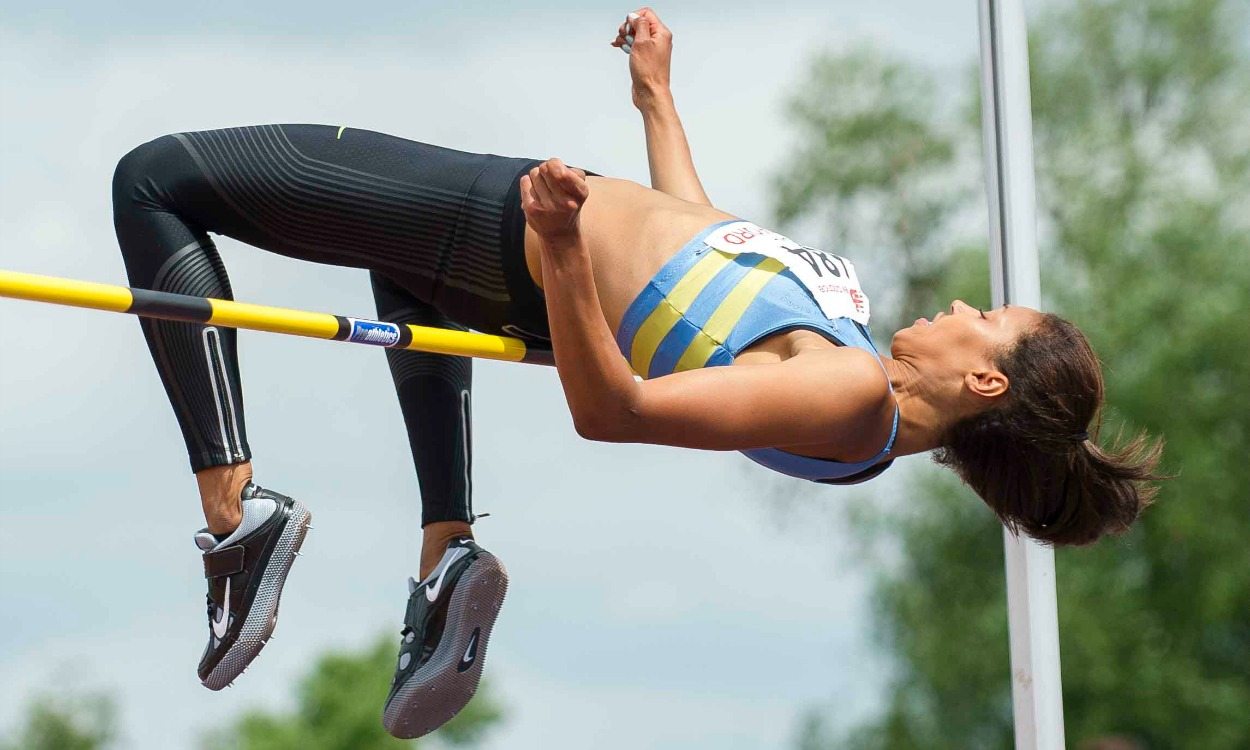 Heptathlete over 1.90m in the high jump on day two in Bedford

Double world junior champion Morgan Lake was in winning form in the high jump on the second day of the England Athletics Under-23/Under-20 Championships in Bedford.

Lake, who in Eugene two years ago won the heptathlon and high jump global golds, defended her title with 1.90m and then had unsuccessful attempts at a UK junior record height of 1.95m.

She has so far this season failed at two attempts to gain the Olympic heptathlon qualifying standard but may have one more go, although she will try to secure high jump qualifying for Rio in next weekend’s senior trials as a back-up.

Niamh Emerson and Abby Ward, who rank first and second under-18s respectively on the continent, did their selection hopes for the European Youth Championships no harm as they won silver and bronze with 1.83m and 1.79m. The event was not a trial for the European Youths, although several youngsters caught the eye of the selectors.

As far as the under-23 age group went, the men’s sprint hurdles was arguably the highest standard of the weekend. David Omoregie’s dive for the line was more akin to that seen in rugby as he ended up on the floor, but it was in vain as he lost out to David King, who clocked 13.57 – just three hundredths outside his PB as he gained another European Championships qualifier. Omoregie, the world junior bronze medallist two years ago, had the consolation of a season’s best of 13.65 for second.

Back in the junior category, the men’s under-20 discus saw a great competition between George Evans, who won the shot put yesterday with a big PB, and George Armstrong, who reached the final of the European Juniors last year. Evans set another lifetime best, this time 58.43m, and went above his rival on the UK 2016 junior ranks.

Rory Dwyer is also on his way to Poland after winning a countback-decided high jump as he and Tom Gale set PBs and qualifiers of 2.17m.

Daniel Rowden took the under-20 men’s 800m and with it the place on the team. He held the bend as several others were poised to pass him on the final lap and clocked 1:49.55, having already secured the standard.

Aimee Pratt finished top junior in the combined under-23 and under-20 steeplechase, clocking a Bydgoszcz qualifier of 10:19.08.

Ryan Gorman took victory in the under-20 men’s 200m to also gain himself a spot on the team. His 20.98 was just 0.03 seconds outside the time that ranks him second junior in Europe this year.

Alicia Barrett stole the Poland place in the 100m hurdles as she dipped five hundredths under the target with 13.45, beating Mollie Courtney, who already had the mark. The latter was second with 13.65.

Staying with the hurdles, Ethan Akanni improved on his European-leading time in the under-18 category, winning with 13.61 over the lower barriers.

Matthew Treston led quick times in the under-20 hurdles, the UK No.1 securing his berth with 13.48 as James Weaver was also under the time required with 13.53.

With a winning leap of 6.21m, Eleanor Broome gained automatic selection in the long jump for the World Juniors, but the under-18 is likely instead to be picked for the European Youth Championships as she ranks second of those eligible.

In the under-23 category, Sophie McKinna set a championship record with 16.67m in the shot put. Meanwhile, in the 100m hurdles, favourite Lucy Hatton’s campaign ended in a DNF as an early hurdles clearance went wrong; victory went to Holly Pattie-Belleli with 13.70.

» Click here for a report from day one of the championships, while the June 23 edition of AW magazine will include in-depth coverage, pictures and results from Bedford