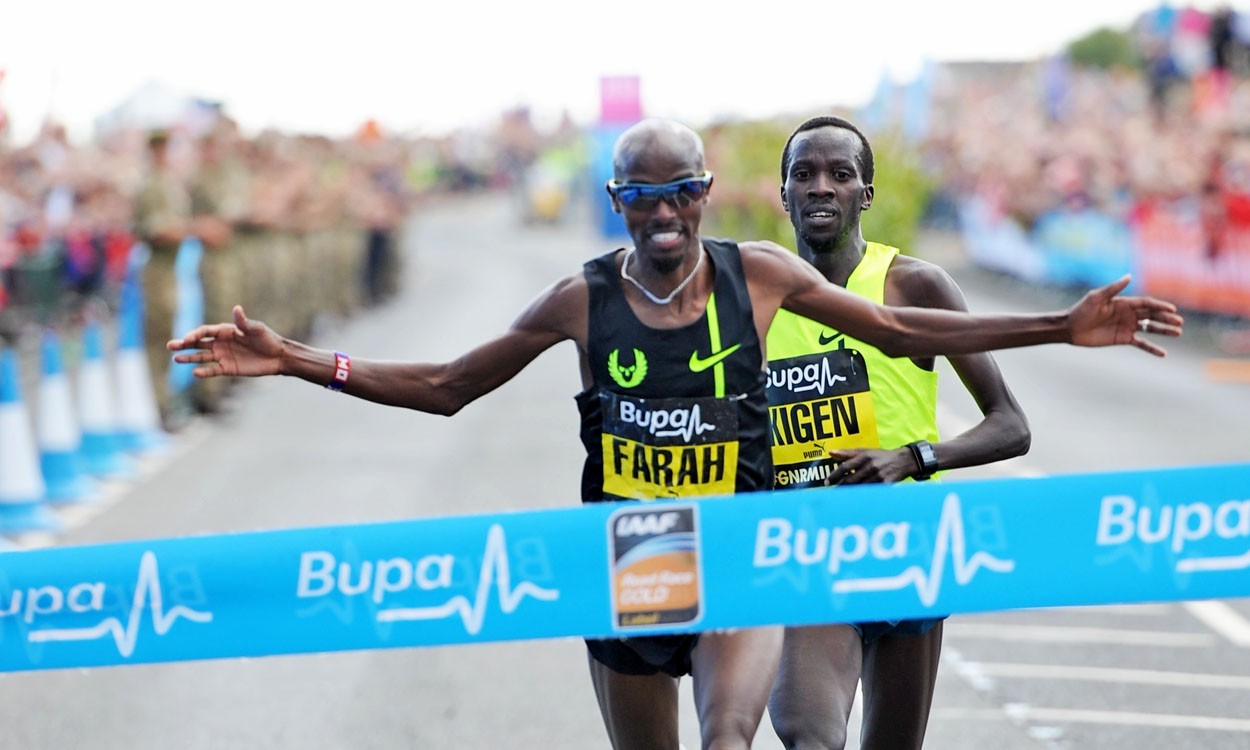 Mo Farah and Mary Keitany ensured that a historical edition of the Bupa Great North Run had even more ways to be record-breaking as double world, Olympic and European track champion Farah ran the quickest ever half-marathon by a British athlete and Kenya’s Keitany broke the women’s course record.

With this year’s race, the Great North Run becomes the first running event in the world to have over one million finishers, but running ahead of that landmark milestone the elite races provided plenty of their own excitement.

While Keitany enjoyed a clear and dominant victory, clocking 65:39 to break Paula Radcliffe’s 11-year-old course record by just one second, the men’s race came down to a sprint finish between Farah and long-time leader Mike Kigen. Farah is known for his powerful kick and he again put it to good use to pip the Kenyan – both athletes recording 60:00 dead – though some later questioned possible tactics and whether Kigen was racing or pacing, having been pushing for parts but later seemingly slowing as Farah surged ahead.

Either way it created an exciting finish to a 13.1 mile journey from Newcastle to South Shields, with Farah’s time the quickest ever run by a British athlete, though it should be noted that the Great North Run takes place on a downhill point-to-point course.

“That was another tough run today and I was lucky I had Mike (Kigen) for company,” said Farah. “We train together in Teddington and Kenya and he’s a tough cookie!”

The two athletes are part of the same sports management group and Farah explained how their aim had been to drop the rest of the field before running together and hopefully finishing strong.

“The conditions were amazing today but to clock 60 minutes exactly is slightly frustrating though!” added Farah, who ran his previous best of 60:10 when finishing as runner up to Ethiopia’s Kenenisa Bekele in last year’s ‘clash of the titans’ on the South Shields seafront. “To be honest I couldn’t have gone much quicker anyway. Mike and I had chat with about 800m to go and he said for me to go but I couldn’t really drop him.

“I wanted to have something left for the finish and I had just enough to secure victory.”

The men’s race had got off to a fairly quick start, with a lead pack of four featuring Farah, Kigan, Stephen Kiprotich and Thomas Ayeko on sub-60:00 pace after the first few miles. Uganda’s world and Olympic marathon champion Kiprotich was dropped at around the four-mile mark and as 10km was passed in 28:19, Kigan and Farah began to leave Ayeko behind.

The second half of the race remained a battle between the two, Kigan creating small leads and Farah fighting his way back. Kigan clocked 57:03 for 20km with Farah one second behind but with 600m to go the Briton pulled ahead before putting his foot down 200m out to the delight of the strong crowds on the South Shields seafront.

Behind them Kiprotich came through with 61:01 for third as Andy Vernon was the next British athlete over the line, the 28-year-old – who claimed European 10,000m silver and 50000m bronze behind winner Farah in Zurich last month – ran a personal best of 62:46 in sixth. Jonny Hay also made it into the top ten with 64:10 for ninth.

Keitany was a much more dominant winner of a stacked women’s race which was missing Ethiopia’s Tirunesh Dibaba through illness. An early leader, the former world record-holder for the half-marathon distance was at the front of a pack of four after three miles, with Britain’s Gemma Steel sitting just behind in fifth. 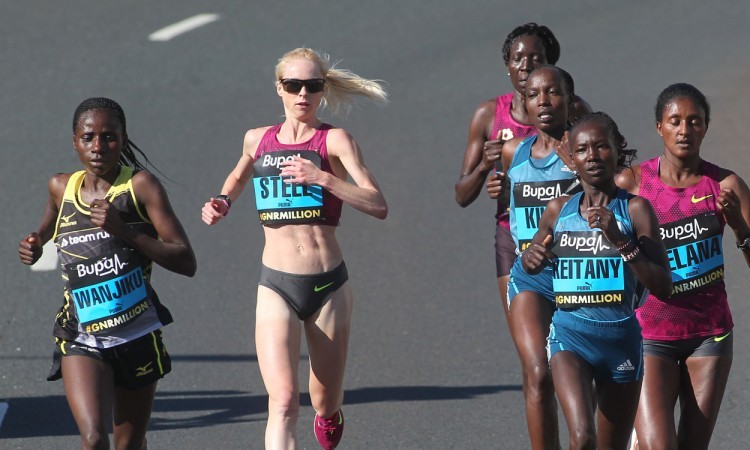 Steel, who had proven her strong current form with recent results including a 31:27 road 10km in August, soon made her way through to sit third behind Keitany and Ethiopia’s Tiki Gelana and it seemed as through Olympic marathon champion Gelana began to pay for having tried to stick with Keitany’s speedy start. Steel eased ahead and was soon running her own race behind Keitany who had passed 10km in 31:16, a split two seconds quicker than Radcliffe had run at that point when setting her course record in 2003.

That pace continued and having initially stopped the clock at 65:40 to tie Radcliffe’s record, Keitany’s time was rounded down, the Kenyan continuing her unbeaten streak over this distance.

Behind her Steel ran a big personal best, her 68:13 the third-quickest half-marathon ever run by a British female behind Radcliffe’s 65:40 and Liz McColgan-Nuttall’s 67:11 from Tokyo in 1992, as Gelena ran 68:45 for third. Also in the top ten were Steel’s fellow British runners Charlotte Purdue with 71:43 for eighth and Susan Partridge with 72:28 in tenth.

“My finishing time is a massive breakthrough and this has given me great confidence,” said Steel. “The race was good today and with Tiki Gelana for company I decided to hold back and make sure I stayed in contention and made the podium.”

British athletes filled the top three spots in the women’s wheelchair race as Shelly Woods claimed her sixth victory at this event, clocking 50:34 ahead of Jade Jones with 53:12 and Mel Nicholls with 53:39, while Spain’s Jordi Madeira beat Britain’s Simon Lawson in a sprint at the end of the men’s race and cruised over the line in 43:02 to Lawson’s 43:06.