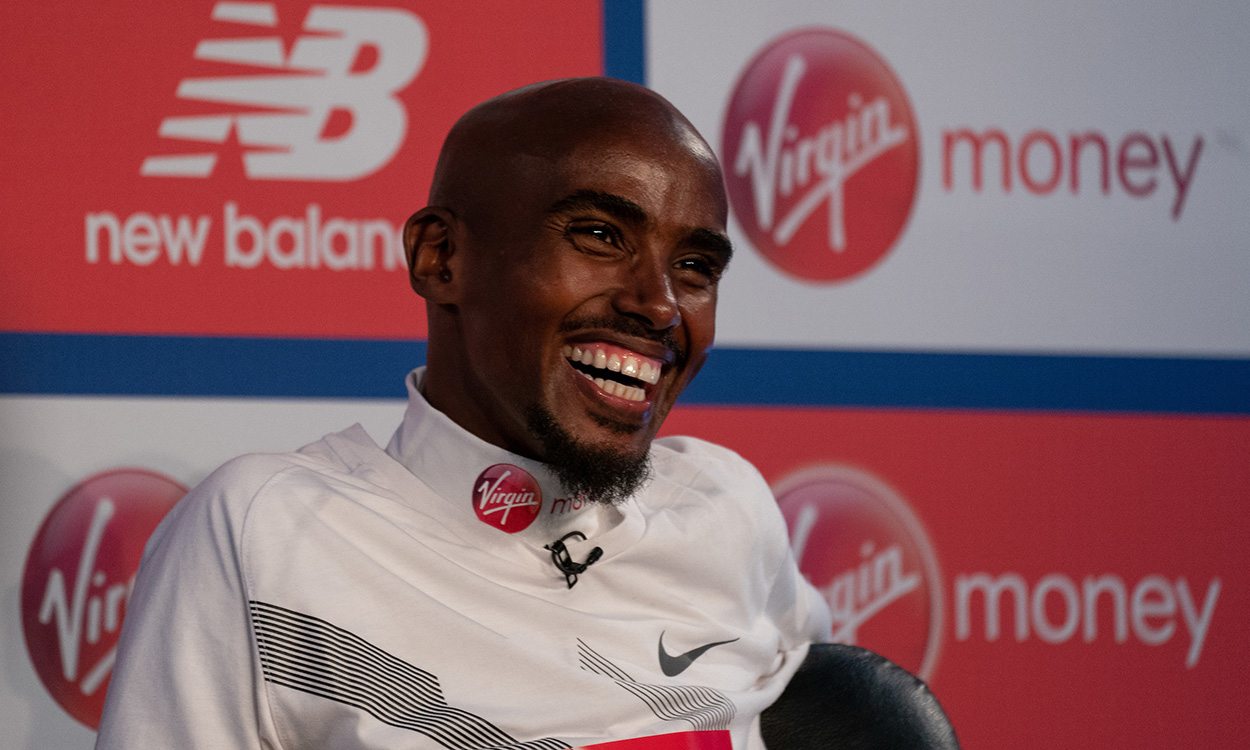 After hitting the wall in 2014, and being chased by dogs in Ethiopia, Britain’s track hero says he is equipped to shine over 26.2 miles this time round

On April 13, 2014, the sun shone on the London Marathon course as the elite race unfolded. Coming past the 17-mile marker, however, Mo Farah distinctly remembers having to grit his teeth as the metaphorical clouds began to gather over him.

“It felt like a big storm was coming,” says the 35-year-old when he thinks back to his marathon debut. “You know when you get drenched and that feeling when you just feel so wet and heavy? That’s what it felt like for me at 17 miles. The further I went, the heavier I felt.

“You see all these people supporting you and you think ‘I can’t just drop out’. I have dropped out of a race before and it’s the worst feeling ever.

“We all talk about hitting the wall. Did I hit that wall? It felt like I did!”

Farah had been aiming for a faster time than the 2:08:21 which saw him finish in eighth place as the new English record-holder but fell short of Steve Jones’ 2:07:13 British landmark.

Yet that run, and the subsequent work he has done, has left Britain’s highly decorated track champion feeling far more informed and assured about what it takes to compete over 26.2 miles than when he took something of a step into the unknown four years ago.

“I’m definitely a lot more confident this time round compared to 2014. Back then it was all new for me,” says Farah, who had run the first half of the London course a year previously to get a taste of the event. “Yes, I did run the half-marathon but I hadn’t run the full distance.

“Now I have run the full distance and learned ‘what point do I get tired? What do I need to do?’. It was a great learning experience for me. I have had another four years after that to try and understand the marathon, to study other athletes and how they run, what they do, who has a similar kind of body shape to me?

“It’s not just case of turning up and running.”

“I’m definitely a lot more confident this time round compared to 2014. Back then it was all new for me”

Under the guidance of coach Gary Lough, husband of women’s world record-holder Paula Radcliffe, the last three months have seen Farah fine-tuning his marathon preparations in Ethiopia. He insists all has been going to plan, even suggesting earlier this week that he will match the likes of race favourites Eliud Kipchoge and Kenenisa Bekele when they push the pace in their anticipated pursuit of Dennis Kimetto’s world record of 2:02:57.

In 2014 Farah went through the halfway point just under 40 seconds behind the leading pack. It’s a fate he is determined to avoid second time around.

“I can’t do that,” says Farah of allowing such a gap to develop. “If I give someone 10 metres into the bell (in a track race), am I going to catch them?”

He adds: “The last three months, it’s been where I’ve wanted it to be. Yes, you do get hiccups, but it’s the marathon. You’re not going to come out of the end of each week and go ‘I feel incredible!’. But as long as you get through it, it’s ok. Now I’m in decent shape.

“Being on the road more there are times when you feel ‘god, do I need to do this?’ and it’s a case of ‘yeah, you DO need to do this!’. There are a few sessions that we’ve done where I felt good and that gave me confidence.”

One of the hiccups of which Farah speaks came during a training run and an encounter with some of the local wildlife on the outskirts of Addis Ababa.

“I was chased by dogs on a long run,” he continues. “There were two of them and they looked big to me! I had to pick up a rock.

“There was me and Abdi Abdirahman and the car was ahead. We got to 17 miles on the run, heard a noise on the road, looked behind us and there they were. They were coming for my skinny legs!”

“I was chased by dogs on a long run. They were coming for my skinny legs!”

Farah laughs at the memory now, betraying a far more relaxed demeanour than the man who was doing his utmost to finish his track career with world championships double gold in London last summer.

Albeit he hasn’t been able to see them much recently, his young family are now based in West London and there is a clear contentment at the move back to British shores from America.

“I’m happy and I am more relaxed,” he admits. “There was more pressure (last year) and I did put a lot of pressure on myself, which is always hard. Now it’s a new challenge, it’s something that’s totally new. It’s not about the last 10 years, doing exactly the same thing. I’m not doing exactly the same thing any more – I just needed to get that excitement back. I could have continued on the track and got some more medals but you have to be excited, you have to be up for it, you have to go with it and I think it was the right time for me to finish on the track.

“Now it’s time to look for that sparkle.”

Should he find it, Farah intends to use the marathon as a means to engineer another shot at an Olympic medal. With four golds already in his heaving trophy cabinet after his 5000m and 10,000m exploits, Tokyo 2020 is a clear aim on the horizon.  But only if he comes up to scratch.

“It depends on how this race goes but I’ll probably do another marathon is six months’ time and then another one,” he says. “The aim is to run as many marathons as I can, just to learn, I think that’s what it will take.”

“If my performance is not brilliant or good then I’m not going to go – unless I’m going to get a medal. Obviously I’d love to represent my country and continue winning medals.”

There could surely not be any better yardsticks to assess his marathon potential against than Bekele and Kipchoge, the second and third-fastest men of all time over the distance. The Kenyan also has the 2:00:25 he clocked as part of Nike’s Breaking2 attempt to his name, albeit the controlled conditions of that run mean it isn’t recognised as an official record.

Farah has also been given a helping hand during training by one of the runners he will be attempting to match this coming weekend.

“Kenenisa is a great athlete and I’ve got a lot of time for him,” says the Briton. “He more than looked after us when we turned up at his track (in Ethiopia). He was very helpful.”

Taking on a field of such quality for only his second marathon is indeed a tall order for Farah, but ultimately the lure of London proved irresistible.

“It would have been nice to go to another marathon where you haven’t got all these guys, like Kenenisa or Eliud, and you just go in there and say ‘could I win that race? Could I run 2:06, 2:07?” he says. “But I couldn’t do another marathon because this is the best marathon and I think Sunday’s race is going to be great.”