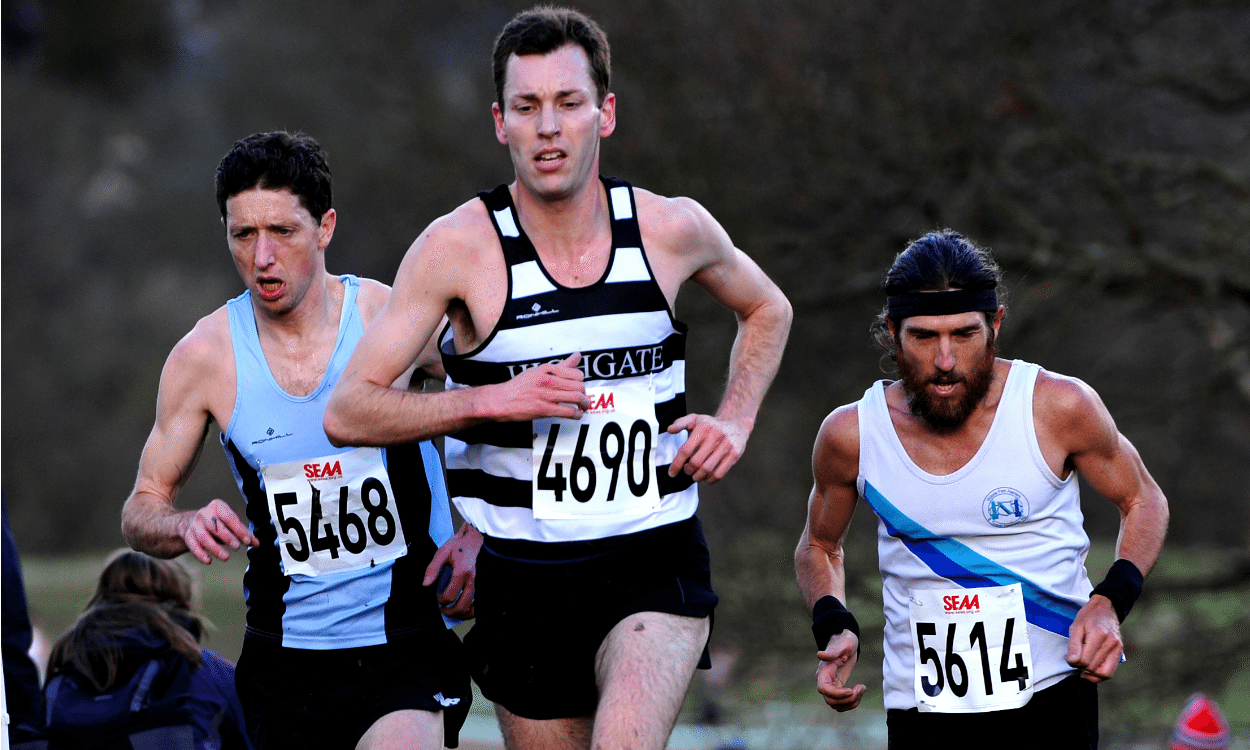 Great Ireland Run winner Andy Maud won a keenly contested South of England Championships at what many regard as the home of UK cross-country running at Parliament Hill.

The Highgate Harrier who was 19th, 8th and 8th in the 2014 to 2016 races, came from 15 seconds behind to catch Richard Goodman, who had set off very fast. The 2014 winner Goodman had won all his previous cross-country races this winter.

Maud (pictured above) clocked 48:27 to Goodman’s 48:42 on a hilly course that was drier and faster than normal and Maud also led Highgate to team victory.

Chris Smith, who was sixth last year, won his first area medal just a few months before he turns 40.

Emily Hosker Thornhill was another new champion as she won the women’s race but it was close as her Aldershot team-mate Louise Small finished just a second down on the winner’s 28:42 over the 8km course.

Hosker Thornhill, who has improved dramatically since her stint in college in New Mexico, was sixth in her last appearance in 2014. She appeared to be cruising to victory but a late rush from Small, who had won the 2011 junior race from Jess Andrews, meant it went down to the wire.

After gaining the top two places, Aldershot had two more in the top 10 to easily win the team event.

Aldershot also had a top two and won the team race in the under-20 men’s event. National champion Ellis Cross took gold easily in 25:36 from Gus Cockle while Dane Blomquist made it a AFD clean-sweep. Blomquist had finished just 52nd in 2015.

Aldershot also won the under-20 women’s team race but their Niamh Brown, last year’s under-17 champion, had to settle for the individual silver after chasing down early leader Gemma Holloway only to see Holloway pulling away again in the final mile to defend her title in 21:32.

Aldershot settled for second team in both the under-17 races. Herne Hill beat them in the women’s as Amelia Quirk of Bracknell took individual gold with another impressive run.

The under-17 men’s race saw Tonbridge take the team award in the best individual race of the day. Under-15 champion Zak Mahamed of Southampton looked like he was going to lose out again to his Hampshire rival Lachlan Wellington, who was second to Mahamed last year, but has edge this winter.

Wellington led into the straight after Mahamed has closed within a few metres on the final downhill and looked to be winning until his rival passed him in the last 20 metres. Wellington came back again in the last few metres but Mahamed was given the verdict in 19:01 though the official one second margin looked less than a foot in distance.

Tonbridge also won the under-15 boys team race and it was a Kent individual gold too as Charlie Brisley of Invicta East Kent won in 14:36. The greatly improved Brisley only ran his first race a year ago when he was just 16th in the Kent Schools Championships.

Herne Hill’s Charlotte Alexander is also a relative newcomer and had only done schools races until less than a year ago. Her potential was obvious as she finished fifth for England in the Schools international last March. She won by 25 seconds in 16:09 as City of Norwich won the team event.

Aldershot won the under-13 boys team golds as long-haired Felix Vaughan of Reigate impressed to win the individual gold while Bethany Cook of Bodyworks won the under-13 girls race in style as Chiltern took the team honours.

» The Midland Championships took place at Loughborough and Alex Brecker retained his senior title in 49:02 from Toby Spencer and Jonathan Thewlis as Notts won the team race.

Juliet Potter was third last year when her twin sister Jane won and she won the 2017 edition in 32:12 with Katie Holt repeating her runner-up position. Birchfield won the team race from Charnwood.

» The North of England Championships took place at Knowsley Safari Park. Derby’s Ben Connor, who was 16th in the European Championships, continued his good form with a 41:13 win ahead of Joe Steward and Peter Newton. Sale Harriers Manchester snatched victory in the team event by just two points from Morpeth.

The under-20 titles went to Scott Beattie (26:57) and National champion Harriet Knowles-Jones (20:47) with the latter winning by over a minute.