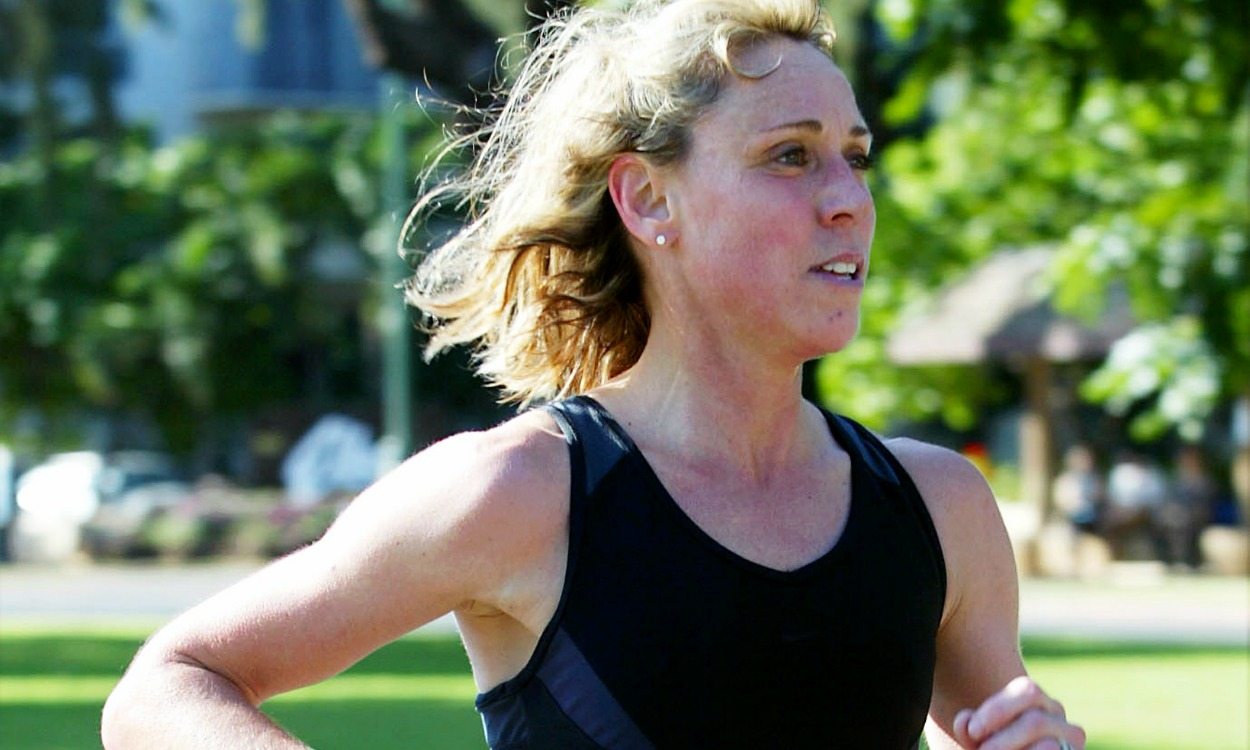 It is now many years since Mary Decker Slaney hung up her track spikes and these days her main sporting target of the year is the Elliptical Cycling World Championships, which is held every October just outside San Diego.

Struggling with both arthritis and the after-effects of more than 30 surgical operations for injuries, she is unable to run freely or without pain. But riding an elliptical bicycle allows her to enjoy a similar feeling and movement to running, only minus the pounding. 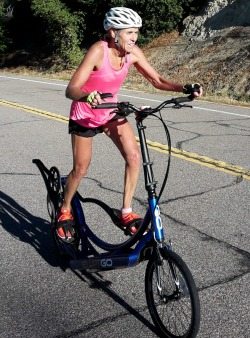 “It has,” says her husband Richard, “been a godsend to her.”

Mary turned 58 earlier this month, but trains seriously for one or two hours a day on an elliptical bike at her home in Oregon and takes the Elliptical Cycling World Championships seriously. The event involves a never-ending climb of almost 12km that rises more than 4000ft as it approaches the finish line near the top of the Palomar Mountain.

Some call it the Alpe d’Huez of elliptical cycling. Yet unlike the Tour de France there are no crowds of fans for this rather quirky event and Mary and her fellow competitors grind up the narrow and twisty road in lonely fashion with only a handful of curious, early-morning onlookers for company.

More than 30 years have passed since she sped to a golden double on the track at the World Championships in Helsinki and tangled with Zola Budd at the Los Angeles Olympics. Back then the eyes of the world followed her every stride. Now, she competes in relative anonymity.

Mary still has a desire to push her body through the pain barrier and she retains the hunger to win for winning’s sake. The 2015 event, for example, was the fourth time she has raced an elliptical bike up the Palomar Mountain and she vows to keep coming back until she wins the women’s title, which is something that has so far evaded her.

For an athletics legend who has a reputation for being a little prickly and who even describes herself as a recluse, Mary is incredibly friendly and generous with her time. She is chatty, has a good sense of humour and talks about her past exploits more than expected. Like most great athletes, she has a considerable air of charisma. If she has a reputation for being hot-headed and at times a little difficult to deal with, she does not show it. Instead, I find her to be charming, likeable and more than a little emotional as she stifles a few tears at least twice during our interview.

Physically, she looks as lithe as she did during her heyday on the track and admits to being only 4lb heavier than she was during her peak. The pigtails and braces that characterised “little Mary Decker” in the mid-1970s are long gone. Her hair is lighter these days, although it is not quite the bottle-blonde look that her nemesis in LA in 1984, Maricica Puica, famously sported, while her warm smile is one of a confident, middle-aged woman at ease with herself.

Up close, though, there are plenty of signs of the ravages of time. Her lower legs and feet are covered in an incredible lattice of tiny white scars from her multiple surgical operations. Her hands, meanwhile, are riddled with arthritis and her fingers are twisted and gnarled.

Not that she seems self-conscious or vain about it. She makes a point of showing me what the arthritis has done to her hands and removes her shoes to reveal the tapestry of scars and withered calf muscles. Naturally, there is regret in her face over what the disease and surgeons have left her with, but she has no qualms about letting me see her battle wounds and with a shrug of her shoulders says she is determined it will not stop her doing her new sport.

“Before I discovered the elliptical bike I was at a point where I was able to go out jogging,” she says, looking back to 2012, when she was introduced to an outdoor elliptical bike called an ElliptiGO. “But I hate jogging. I really hate it. Shuffling along at seven or eight-minute mile pace is not satisfying. But that’s all I could do because I could not get up on my toes any more when I ran.

“So I got to the point where, for a few years, I didn’t even want to do that because I felt if I could not run properly then I wouldn’t want to be out there at all. But now, after training on an elliptical bike, I am fitter than I have been in 10 years. Jogging slowly was more hurtful to me than doing nothing at all, but getting on this bike and riding and realising that I could push myself up a hill and push myself on the flat, I got ‘that feeling’ again. And I thought I’d never have that feeling again.”

“Over all the years I was always accused of overtraining and I don’t believe I overtrained. I was not a high-mileage athlete”

Looking back on her catalogue of injuries, the common theory during most of Mary’s career was that the same biomechanics that helped her break world records were also to blame for her body continually breaking down. She was like a highly tuned but incredibly fragile racing car.

“You know, that’s what they say,” she sighs, before proposing an alternative theory that culminates with the suggestion that most of her multiple operations were probably not even necessary. “Over all the years I was always accused of overtraining and I don’t believe I overtrained. I was not a high-mileage athlete,” she explains.

“My high-mileage weeks were 70 to 80 miles, but I couldn’t do a lot of those because if I did do them then I would be hurt the following week. So when I performed at my best on the track in the middle-distances I was training right around 50 to 60 miles a week.”

Emphasising quality over quantity, she adds that most of her own training miles were at a brisk pace. “I rarely ran slower than six-minute pace so it was always good quality training.”

Rather than her injuries being related to over-training or wonky biomechanics, she believes it was all due to an inherited condition. “In retrospect I have this gene, which I only found out about when I was diagnosed with arthritis in my hands. It is HLA-B27L and it makes you predisposed to inflammation in all parts of the body. I’ve had an unusual form of colitis. I have arthritis. I’ve had sinusitis. I’ve had all the ‘itises’ you can imagine.”

Mary reckons her first operation for a running-related injury took place soon after she left high school and started college. Another one almost killed her, she adds, after the area that was operated on became infected. With hindsight, much of the surgery was probably unnecessary as well.

“The only thought at the time was that ‘she overtrains because she runs and runs at a high level’, but it is a proven fact that if you have this gene then you can have an Achilles problem without doing much or even any running,” she explains. “So I feel like I had a lot of surgeries that may not have been necessary if I’d been diagnosed earlier with this predisposition and treated for it with preventative medicine.”

To combat her problems, Mary takes methotrexate and some other medications, mainly for her arthritis. “At first the arthritis was apparent in my hands,” she remembers. “When you have other aches and pains, you don’t think you have arthritis. But when I looked at my hands and they started doing all the twisty-turny stuff and it began to hurt, then I went to see a rheumatologist.

“I was tested for lots of things and that’s when all this other stuff came out about the gene causing my problems. I was, like, wow – you mean all these years, all these 30 years, I may not have had to have half the surgeries I needed to have? And that I might still be running today?”

Pointing to a particularly extensive surgery done to her feet, she says: “They rerouted the tendons in my toes to take pressure off my posterior tibial tendon, which I ruptured in the last track event which I got to compete in, which was a 5000m in my national championships in New Orleans in 1998. My goal at that time was to train long enough and hard enough to make the 2000 team to go to Sydney. So I went to have this surgery, which was the most horrible thing in the world because I had both feet in both legs operated on.

“The premise for having the work done was that it would take the stress off my lower legs, my Achilles tendons and my posterior tibial tendons. At the same time this doctor did a gastroc release (lengthening the gastrocnemius tendon to relieve pressure in the foot) and now I have absolutely no calf muscle and I never got it back after the surgery – ever – despite going to physical therapy for years and years.

“I did everything you can possibly try to do, but I couldn’t get a calf muscle back and it won’t fire anymore because of the operations. So even now riding the ElliptiGO, I think I’d be stronger on it if I had a calf muscle because right now I am strong here,” she says, pointing to her heart and lungs, “but down here, in my calf muscles, there is no strength.”

Success at the Olympic Games always eluded her. Similarly, she would have loved to have run a marathon and reveals she made a private pact with Fred Lebow, the race director and founder of the New York City Marathon, to make her 26.2-mile debut in the Big Apple.

“Before Fred died, I had a deal with him,” she recalls. “I told him that when I run my first serious marathon I wanted to run New York. We had this deal but Fred is now gone and I never got to.”

Back home in Oregon, the focal point of Mary’s day is her training ride on her elliptical bike. During these workouts, she completes anywhere between an hour and up to four hours with every session culminating with a one-and-a-half-mile uphill effort back to her house. “A short workout for me is one and a half hours,” she says. “I feel good if I do two and a half and if I do fours I think ‘woo-hoo!’”

She has three Weimaraner dogs and a couple of smaller dachshunds and is keen to show me photographs of them which she carries on her phone. Beautiful animals with long legs, bags of energy and unusually piercing eyes, the Weimaraners used to accompany Mary on long walks in the woods before she discovered the elliptical bike. For years it was her only exercise. “We have 55 acres and all I did, exercise-wise, for a while was go out hiking in the woods with the dogs,” she says.

“Now, on the bike, I put in between 200 and 250 miles per week generally. Sometimes something comes up that gets in the way, but generally I am pretty consistent. It makes the rest of my life whole, because when you start running and competing from the age of 11 and all of a sudden it stops, there is a big void and I was left thinking ‘how do I fill it?’ And this has done it.”

» This is an abbreviated version of a chapter that appears in Collision Course, the Olympic Tragedy of Mary Decker and Zola Budd, written by AW editor Jason Henderson and published by Birlinn for £12.99. See birlinn.co.uk/collision-course