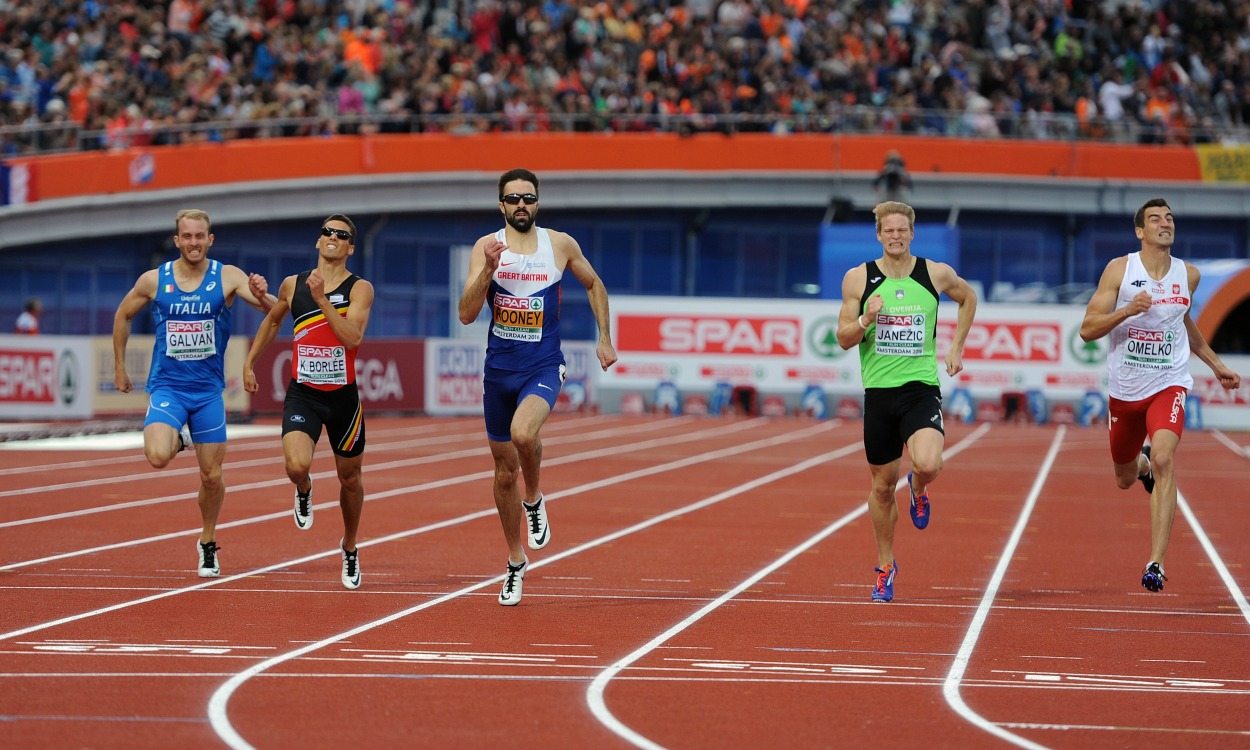 It was one of the busiest ever mid-championships evenings as 11 gold medals were on offer on day three of the European Championships in Amsterdam.

Britain won four medals with gold for Martyn Rooney at 400m, silver for long jumper Jazmin Sawyers and bronzes for Danny Talbot at 200m and Anyika Onuora, while there were also some near misses and disappointments and a few shocks on the night.

Rooney successfully defended his 400m title in 45.29. After holding back in the first 200m, he took control on the bend and had a clear lead into the straight. He began to tire and the fast-finishing double world indoor champion Pavel Maslak closed the gap to less than a metre. The Czech ran 45.36 in second with the crowd roaring home Liemarvin Bonevacia to bronze in 45.41.

“A couple more athletes have come here and picked up medals and there will be more to come. It’s great for us, going to Olympics with confidence.

“Last time I won I was relieved, this time I’m elated.”

In the women’s long jump, Ivana Spanovic, who has medalled in the last two World Championships outdoors and indoors and was second in the last Europeans, won as expected but not as clearly as she would have liked. A 6.94m second round jump proved sufficient for the title but only by eight centimetres.

For the fourth successive year, Sawyers won a silver medal but this was a huge surprise as she jumped a windy 6.86m in round three to easily finish clear of the bronze medallist Malaika Mihimbo of Germany.

She said: “I’m so happy – it’s going well – my first European senior champs and a silver medal! I couldn’t be happier with that.”

As all of the 17,000 crowd anticipated, Dafne Schippers won the women’s 100m final by a huge margin to ensure the Netherlands gained a 100m sprint double.

The world 200m champion retained her title with a three metre margin, winning in 10.90. Bulgaria’s Ivet Lalova-Collio won her second silver of the championships in a distant 11.20 while Switzerland’s Mujinga Kambundji finished third in 11.25 just ahead of Asha Philips’ 11.27.

Schippers had been a class apart in the semi-finals and she won the first heat into a headwind in 10.96, four metres ahead of Philip.

Desiree Henry had been easily second fastest overall as she won the third semi in 11.09 but disaster struck in the final as already trailing, she suffered injury and tried to keep going. While Schippers was being interviewed on the track, Henry was taken off on a stretcher.

Churandy Martina seemingly completed a sprint double as he was first across the line in a very close 200m final in 20.37. Bruno Hortelano, who was fourth in the 100m, was originally second in 20.45, but later it was announced that the Dutch athlete had gone on the inside line three times and the Spaniard was promoted to gold. Turkey’s Ramil Guliyev advanced to second in 20.51.

Danny Talbot was fourth across the line and thought he missed a medal by a few feet with a time of 20.56 but later found he had pipped Solomon Bocakie to a medal by an even smaller margin as both ran 20.56. Talbot had qualified fastest for the final with a season’s best 20.37 which matched the winning time in the final.

Nethaneel Mitchell-Blake didn’t look in his US form but did well from lane one to go close to a medal with 20.60 after a 20.46 in his semi-final only qualified him as a fastest loser.

Libania Grenot comfortably retained her women’s 400m title in 50.73. The Italian won by five metres in 50.73 with Italy’s Floria Guei taking the silver medal for France. There was a big battle for the bronze and Onuora deserved it after really attacking the race and she just held off team-mate Christine Ohuruogu’s usual late rush. Onuora ran a season’s best 51.47 to the former Olympic and double world champion’s 51.55. With two already selected for Rio, Onoura’s bronze could give the selectors a headache in choosing the final place.

As expected, former Cuban Yasmani Copello won the 400m hurdles. However after a fast 48.45 semi-final, he only ran 48.98 and won by less than a metre from surprise Spaniard Sergio Fernandez (49.06), while defending champion Kariem Hussein of Switzerland was third in 49.10. Britain’s 2012 champion Rhys Williams was fifth in 49.63 but Jack Green, who had run 48.89 in his semi-final, failed to finish.

Andy Vernon pulled out of the men’s 10,000m with a foot injury, leaving Dewi Griffiths as the sole Briton and he ran the race of his life to be third until the last lap. Finally finishing in fifth he was rewarded with a PB 28:28.55, just over two seconds from third.

After a slow 68.21 opener Turkey’s former Kenyans Ali Kaya and Polat Kemboi Arikan blazed a furious pace with two 63 laps and then a pair of 65s breaking them clear.

The men’s 3000m steeplechase started slowly with a pedestrian 2:56.99 opening kilometre. The pace picked up slightly at 2000m in 5:44.46 with Turkey’s Aras Kaya leading until the penultimate lap when Mahiedine Mekhissi-Benabbad pushed on.

A 62.9 final circuit (with an outside water jump) gave him an easy gold. In 2014, the French athlete had crossed the line a clear first but was disqualified for removing his vest. This time it remained and he won the title in 8:25.63.

Britain’s Rob Mullett ran well in his first major final and was frustrated the slow early pace cost him an Olympic qualifying mark but his 8:33.29 for sixth place represented one of the best steeplechase performances by a Briton for a long time.

In the women’s discus, Julia Fischer led the first three rounds with a best of 65.77m. Olympic and defending champion Sandra Perkovic then took control with a 66.03m fourth round and then a 69.97m fifth round to easily win the gold medal. Germany took the next three places with Fisher second and Shanice Craft third.

Though she had a best of just 60.29m, Jade Lally achieved Britain’s best ever result in the event with a seventh place, going one better than Bevis Reid in 1938 and Kathleen Dyer in 1946.

Three-time pole vault champion Renaud Lavillenie failed to make it four as he was unable to clear his opening height of 5.75m. Incredibly, all his opponents exited at 5.70m which the Frenchman passed.

The gold medal went to Robert Sobera with a modest 5.60m. The Pole cleared all his heights first time and won on countback from Czech Republic’s Jan Kudlicka, who only cleared 5.60m at the second attempt. Slovakian Robert Renner won the bronze with just a 5.50m vault sufficing.

Britain’s Sophie Hitchon matched her superb fourth in Beijing. She was third after two rounds with 71.74m and backed up that mark with all her throws over 70 metres and her last two of 71.59m and 71.41m.

On day one of the heptathlon, defending champion Antoinette Nana Djimou was the top hurdler with a time of 13.26. Britain’s double world junior champion Morgan Lake started with a poor 14.72 which was easily the worst of the 20 competitors. However, she cleared 1.89m in the high jump when the best of the rest cleared 1.80m and she moved to third on 1972 points closely behind Anouk Vetter (1984) and the 2013 world champion Hanna Kasyanova (1978).

In the men’s 800m semi-finals, defending champion Adam Kszczot won his race in 1:46.32. In the second race, Britain’s Elliot Giles didn’t get himself into a good position and was slightly boxed in at the straight but had sufficient speed to finish a clear qualifier in third in 1:47.31 in a race won by the 2010 champion Marcel Lewandowski from 1:42.51 performer Amel Tuka.

Much to the home crowds’ delight, Sifan Hassan made a successful outdoor debut as she won the first heat in 4:13.45. GB’s Melissa Courtney couldn’t cope with the last lap acceleration and was a non qualifying eighth in 4:18.74. Sarah McDonald was always in the thick of the battle for a final place in heat two and a good finish gave her fourth place in 4:11.14. Serbia’s Amela Terzic, a double European under-23 champion, was fastest of the two races with 4:09.71.

In the men’s hammer qualification, there was torrential rain for Group A but Scotland’s Chris Bennett revelled in the conditions and his 74.39m stood up as the fifth best throw overall and easily qualified for the final. Mark Dry only narrowly missed out in Group B as he threw 71.96m for 15th, with 72.55m eventually proving enough for the final.

British record-holder Nick Miller didn’t cope with the rain well and a 67.76m plus two no throws left him 25th overall. World champion Pawel Fajdek struggled with two no throws initially and was in danger of elimination but confirmed his class with a 78.82m final throw to head the qualifiers.

David King won his heat in the rain in the men’s 110m hurdles qualifying round in a near PB and was third fastest overall.
Milan Trajkovic took a big chunk off his Cypriot record to head qualifying with 13.39.

Lennie Waite didn’t help her cause in the women’s steeplechase qualification heat one with a heavy fall at the first water jump. This left her at the back of the field and she did well to move through but didn’t quite have the last lap speed to come higher than eighth in in 9:48.46, which ultimately lost out on a final spot by less than a second. British champion Rosie Clarke started promisingly but faded on the later laps and ended up 12th in 10:00.25.

While Britain had no qualifiers, all three Irish runners qualified including Birchfield’s Sara Treacy. Luiza Gega of Albania was fastest with 9:38.87.

Stina Troest of Norway was fastest in the women’s 400m hurdles qualifying round with a time of 56.32.

» Full results can be found here. See the July 14 edition of AW magazine for in-depth reports, pictures and results