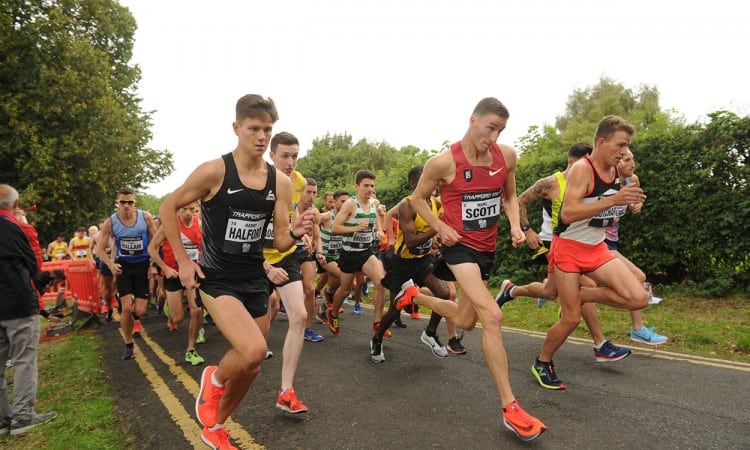 Andrew Butchart is second on return from injury, while junior sprinter Kristal Awuah is among athletes to impress in Berlin

The past week has featured Diamond League finals in Zurich (report here) and Brussels (report here), while younger athletes were in action at the School Games in Loughborough (day one report here and day two report here).

Other recent highlights included the following…

Marc Scott ran a road 10km PB of 28:57, while Jessica Piasecki clocked 32:52 to win the Trafford 10k, which incorporated the England 10km Championships.

His winning time puts Scott, who recently went top of the UK 5km rankings with 13:45 at the Mid Cheshire 5km, third on the UK 10km list for this year, while Piasecki’s time places her fourth in the rankings.

Scott finished ahead of Andrew Butchart, who was making a return to racing after the foot injury he sustained in February (read more from Butchart on the lessons he’s learned from injury here).

Elsey Davis claimed the runner-up spot in the women’s race in 33:57 ahead of Dani Nimmock who ran 34:16 in third.

6 months ago I broke my foot … Today I had my first race back! Can’t even explain how fun it was to put my @newbalance vest on and race ? congrats to Marc on the victory! And huge thank you to all the support today and obviously to everyone who has helped me get back racing so soon ?? #BionicButchy #TeamNB #CoachMahon . . ? – Pete Brown

Double world under-20 bronze medallist Kristal Awuah was among the athletes to impress as she moved closer to Dina Asher-Smith’s British under-20 100m record of 11.14, clocking a PB of 11.16 (-0.1) to win the B race. That time puts her second on the UK U20 all-time list.

In his farewell competition, Germany’s 2012 Olympic and three-time world discus champion Robert Harting finished second on home soil with a best of 64.95m. The winner was his brother, 2016 Olympic champ Christoph, with a throw of 65.67m.

Robert Harting ended his career with a runner-up finish at the ISTAF in Berlin today.

Dewi Griffiths and Lily Partridge retained their titles on a new course for this event.

Griffiths, who is continuing his comeback after injury, led a total of five athletes inside 30 minutes with his winning time of 29:10 ahead of Matt Clowes with 29:19. Jake Smith was third (29:31).

At the 10,000 series which included seven races and 193 entrants, Paul Martelletti was among the winners as he clocked a season’s best of 30:13.33 in the final race.

Paul Martelletti warmed up for his Ladywell 10,000 win on Sunday with a win over the multi-terrain course in Beckenham Place Park.

He won in 19:39, two seconds ahead of Aaron McGrady. Fifth-placer Jim Allchin won the individual title for the six-race league series which was first run in 1976.

Amy Clements won the women’s race in 22:12 for her fifth league win of the season but third-placer Clare Elms won the overall league to give her a record fifth title.

Kent AC won both team events over the season.

Lachlan Wellington posted his second victory of the series and did so in a personal best, but it was veteran James Baker who again sealed the overall series award.

There was a close battle for the women’s race victory on the night as Emma Jolley narrowly headed Sarah Kingston in 18:04 to also win the women’s overall title.

Read more from a report by Martin Duff in the next edition of AW.

Morpeth Harriers retained the senior men’s trophy at a meeting renamed after the former Sunderland Harriers coach, who died earlier this year.

The host club gained consolation by winning the senior women’s relay and both veteran events.

Josh Fiddaman won a highly competitive U17 race, with Lydia James winning the equivalent girls’ event. Euan Duffin gained a convincing victory in the U15 race, with last year’s top U13 athlete, Chris Perkins, in second place. Katie Francis comfortably won the U15 girls’ event. Tom Slane and Freya Clarkson were successful in the U13 races.

Read more from a Les Venmore report in the next edition of AW.

European 1500m fourth-placer Ciara Mageean continued her strong form in edging Hannah England and Jemma Reekie over 800m, with a winning time of 2:02.48.

Jessica Judd continued her prolific racing regime, with a 4:09.27 run in the metric mile a week after her win in the BMC GP at the same venue.

Read more in a report by Stephen Green in the next issue of AW.

» Further coverage and results in the September 6 edition of AW