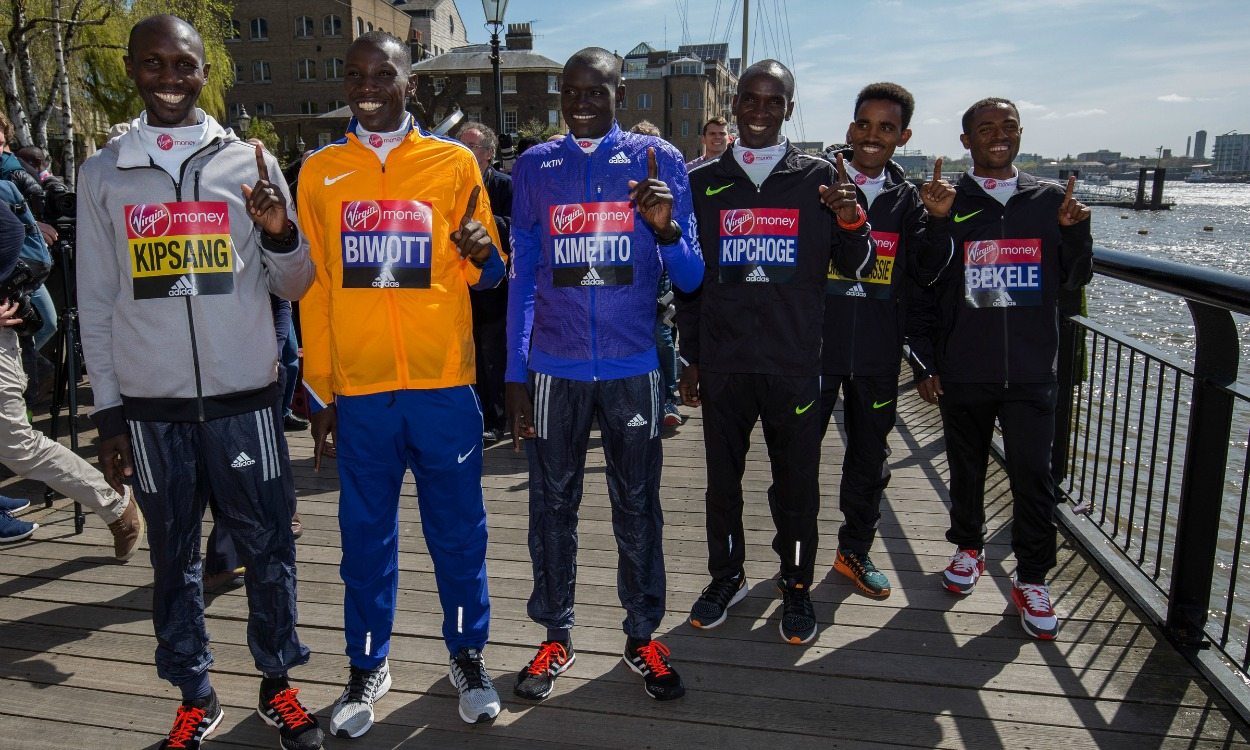 This year’s Virgin Money London Marathon is again a special one with most of the big names signed up for Sunday’s race.

It is perhaps surprising in view of the importance of the race with the Rio Olympic Games on the horizon that only four Kenyans start compared to seven last year. The other change from last year is there are 12 Brits in the elite field compared to two.

With comparisons important to other spring races, a fast pace is essential and the pacemakers won’t be far off world-record pace at halfway before withdrawing in the second half. The key may be when they drop out and which of the leading contenders is willing to take over the pace.

Defending champion Eliud Kipchoge, who ran his PB of 2:04:00 when winning the Berlin Marathon last year despite a footwear malfunction, is favourite to retain his title in the British capital. The 2003 world 5000m champion has won five of the six marathons he has contested in his career so far.

Kipchoge beat former world record-holder and two-time London champion Wilson Kipsang by just five seconds at last year’s event and the two Kenyans are expected to do battle on the streets of the city again this time around, while world record-holder Dennis Kimetto returns to marathon action after dropping out of the Fukuoka Marathon in December with injury. Now over his leg problems, Kimetto says he is targeting Kipsang’s course record of 2:04:29 run in 2014, while Olympic selection is on the minds of all the Kenyan athletes racing. As there is no set selection criteria the quartet, which also includes New York City Marathon winner Stanley Biwott, will be looking for quick times and a top position to put them in contention for an Olympic place.

It is a similar situation regarding Rio selection for the four Ethiopian athletes in action. Among them is Kenenisa Bekele. One of the greatest runners of all time with multiple Olympic and world titles, his road form hasn’t yet matched his form on the track and country as he won Paris on his debut in 2014 in 2:05:04 but was absent from the roads last year after injury issues.

“Since I won the Paris Marathon in 2014 I have suffered from many injury problems,” he said. “I’m 90 per cent fit so my goal on Sunday is to challenge the world’s best marathon runners.”

Olympic selection should be more straightforward for Eritrea’s world marathon champion Ghirmay Ghebreslassie and he is on the hunt for a PB to improve on his 2:07:47 from Hamburg last year and a top three finish in London.

“Even though there are many marathon runners in our country, for sure I am in good shape now,” said the 20-year-old. “In relation to the shape I have now and competing with the other athletes, it is easy for me to qualify.”

An up-to-date elite men’s start list can be found here.

Pacing info for the #LondonMarathon. Yes, that’s the women’s world silver medallist as one of the pacemakers..! pic.twitter.com/IjZftAAj4l

Battle of the Brits

This year’s London Marathon boasts one of the biggest domestic presences in the elite field for many years with 12 athletes hopeful of being in Rio.

Two of the runners, Scott Overall and Callum Hawkins, already have the 2:14 qualifying time so effectively just need to be the top two British athletes on Sunday to ensure lining up in Rio.

However, the pair aren’t alone in having the potential to run inside that time.

Speaking at the pre-event press conference, he added: “I’m so excited that I’m sat here and not at home thinking what might have been.”

Derek Hawkins has a PB of 2:14:15 and his ninth place in the Commonwealth Games showed he has the ability to join his brother in Rio, while Jonny Hay makes his marathon debut and is clearly in superb form proved by his National and Southern wins on the country, a 1:42:43 solo 20 miles and a 64:53 half-marathon. It suggests a sub-2:14 is within his grasp.

The elite men’s race gets underway at 10am on Sunday ahead of the mass marathon.

USA’s Joshua George defends his wheelchair racing crown, but all eyes will be on British favourite David Weir as he attempts to win a record seventh title.

In 2012, Weir equalled Baroness Tanni Grey-Thompson’s record of six London Marathon victories and has been targeting a seventh ever since. “I’ve actually been more hungry this year than I have ever been,” said Weir.

He finished fourth at the Boston Marathon on Monday and in London the six-time Paralympic gold medallist will again go up against the winner of that race, Switzerland’s Marcel Hug.

Athletes will also be chasing a $20,000 winner’s prize, with the added incentives of an IPC Athletics Marathon World Cup title on offer to the victor. What’s more, there are points to be won as the London Marathon races are part of the new Abbott World Marathon Majors Wheelchair Series.

Derek Rae is another athlete with Rio ambitions. The T45/46 runner hopes to further improve his PB which he has taken from a time of 3:03:00 run before the motorcycle crash after which he lost the use of his right arm, to 2:40:40 which was clocked at the IPC Marathon World Championships.

» See the April 21 edition of AW magazine, which is available to order here or access digitally here, for an in-depth look ahead to Sunday’s action