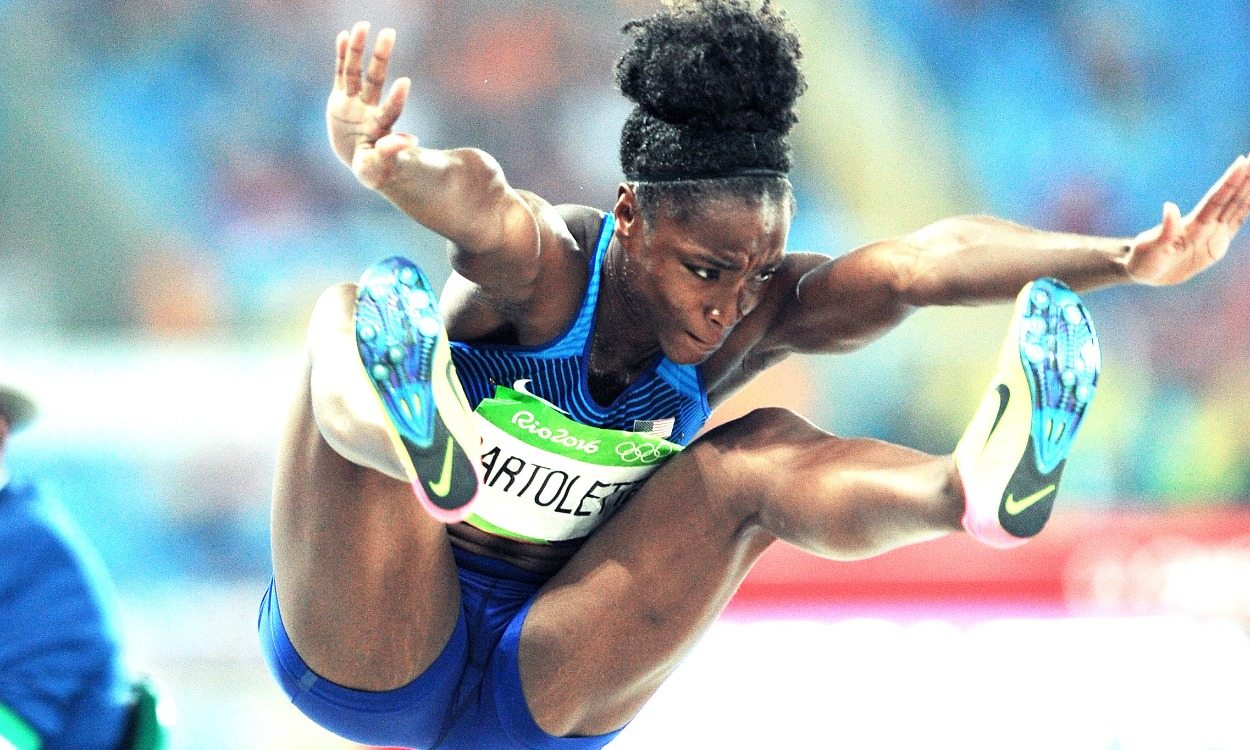 Tianna Bartoletta is recovering from an amazing 12-month period during which she won the long jump at the 2015 World Championships and the 2016 Olympics. But there is a lot more to the American than long jump.

Tianna Madison, as she was before she married John Bartoletta in 2012, first succeeded on the world stage in 2005 when she won the World Championships long jump in Helsinki, jumping 6.89m for gold. It would be 10 years before she recorded another big win outdoors.

She found the experience of winning the World Championships in 2005 as a 19-year-old quite different from winning as a 29-year-old. For one thing, she feels that she did not receive the recognition she deserved for winning first time around.

“A lot of people thought 2005 was an accident or a fluke,” she said. “The weather wasn’t great and some people who were expected to jump well, didn’t. At the time it was the shortest jump ever to win the World Championships. There was a lot of noise. But to me, I had a medal and I had proved something to myself. I was the best on the day and that was worth something.

“At 20 it was ‘oh my goodness, what happens next? What about school? What about going pro?’ It was quite scary and the sense of accomplishment didn’t last that long.”

The 2015 World Championships was an epic battle. Shara Proctor seemed to have won the competition with 7.07m on her third jump, following it with a second seven-metre leap. Ivana Spanovic was in second place, also with two seven-metre jumps. With only her final jump to go, Bartoletta was equal third with 6.95m, but with her final she nailed it – a PB of 7.14m.

It was not the first time she had won with her final jump. Her wins in Helsinki in 2005 and the World Indoors in Moscow in 2006 had ended the same way. She said of that Beijing jump: “I think I’d just drew on my experience of having that ability to show up and show up big. Leading the whole way doesn’t really matter to me; you win with one jump.”

Bartoletta took gold in the 2016 Olympic long jump – but not without a fight.

“Winning in 2015 was more of a dream realised. It wasn’t scary like 2005, but the sense of fulfilment and accomplishment was much greater”

A second-round 6.94m put her in silver and a 6.95m in the third left her tied for the lead with Serbia’s Spanovic. In round five American Brittney Reese took the lead with 7.09m and then Spanovic’s 7.08m left Bartoletta in third. She replied with 7.17m on her fifth jump. Reese then found a big one, agonisingly for her measured at 7.15m. Bartoletta capped off her day with 7.13m. Amazingly, all of the top three recorded seven metres on their last two jumps.

But her reaction to the win was muted: “It was one of those things that at any minute someone could jump something huge, so I didn’t really celebrate my 7.17m. Once the competition ended, my next thought was that I have to be back in the morning for the relay, but I am really happy to have pulled it off.”

Getting to Rio in sprints and long jump was no easy task. She described the US Trials as a “busy three days”. On day one she had long jump qualifying and on the next she had the final and the 100m preliminary. Finally came the 100m semi-final and final.

She is happy with the US trials system, which seems brutal to people used to the much more discretionary GB equivalent. “It’s a love-hate thing!” she said. “I love it because if you get through it you are on a good trajectory to make the final of what ever championship it is. The mental toughness which it takes carries over for the rest of your life. It makes us better.

“I think it’s fair because expectations are clear – if you’re not in one, two or three, you aren’t in. From the federation’s perspective it means they’ll have the three absolute best athletes. It is almost like Hunger Games!”

So how does the multi-talented athlete see herself? “A jumper who sprints or a sprinter who jumps, I’m really not sure.

“I think I will go with jumper-slash-sprinter. I really could go either way. I am not sure what it would take to make one higher than the other. I have been jumping for a long time, since high school, and my world titles have come in long jump and I did not make the Olympic team in long jump until 2016 but have won a medal in sprints. So it’s kind of murky!

“In training I would say that I sprint a lot more than I work on the jumps. I did not train for jumps in the indoor season. When everyone else was jumping, I was only sprinting. If you were to observe my training sessions you would only see a sprinter.”