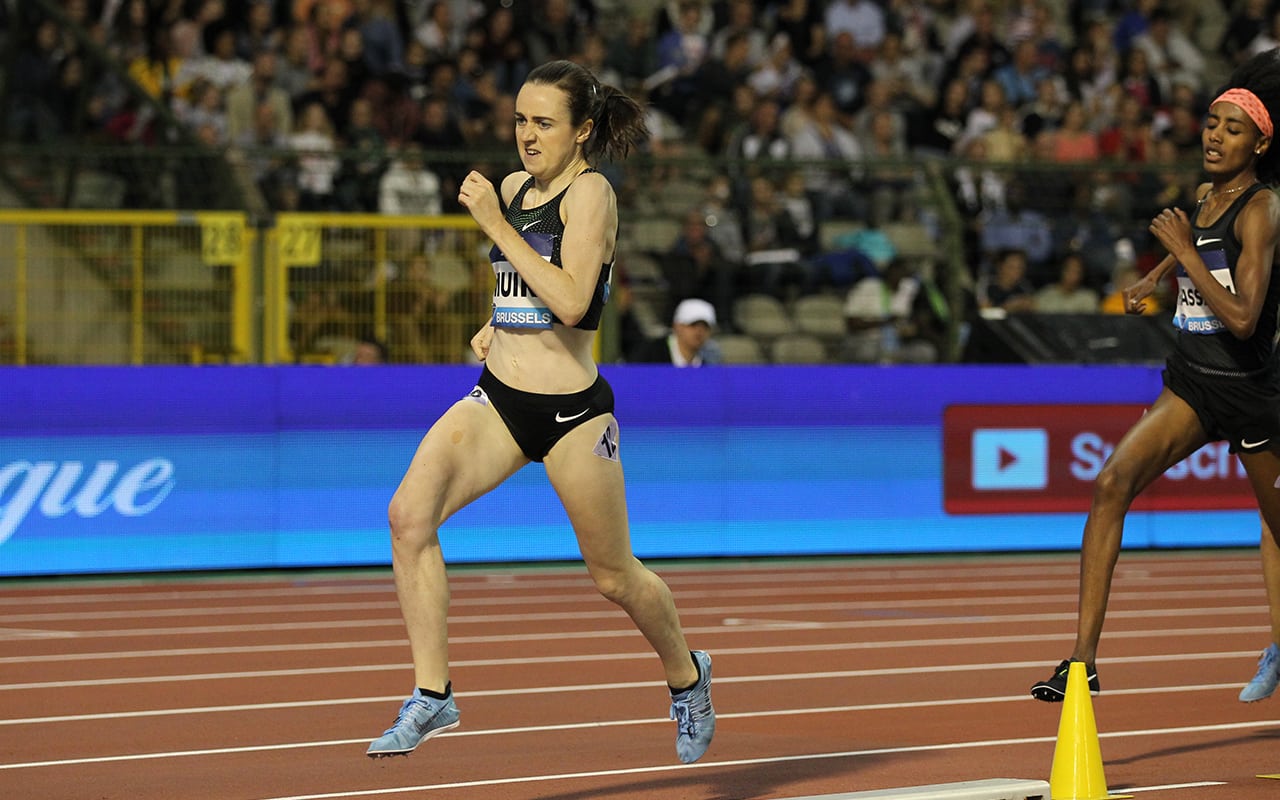 On a sensational night of athletics, European champion Laura Muir produced her best performance of the season to secure the biggest win of her career,  taking the Diamond League 1500m final in style in 3:58.49.

The Scot’s previous race had seen her finish 11th over 800m in 2:04.71  in Rovereto last week but she looked a totally different athlete as she gained revenge on her conquerors from the Diamond League races she has contested in Eugene, Stockholm, Lausanne and London this year.

Pacemaker Dariya Barysevich blasted the first lap in 61.35 – far too fast – and, as is her tactic, Gudaf Tsegay got immediately behind the Belarus athlete. Muir held back initially but was quick to follow Sifan Hassan, who had travelled by car from Zurich after her 5000m second place the night before, the Dutchwoman surging from the pack in an attempt to close on the leading two.

The Ukrainian slowed on the second lap to 65.15, allowing Hassan and Muir to close up, with the rest a few seconds further back. Shelby Houlihan, who had outkicked Muir in Lausanne and Eugene, eased away from the chasing pack herself and gradually began to close on the leading quartet.

Hassan went ahead on the third lap but did little to up the pace and Muir eased by to lead through the bell in 2:58. She was also ahead at 1200m in 3:13.23 – the third lap being covered in 66.72. Houlihan was now at the back of the leading group and looking the freshest.

Muir picked the pace up along the back straight, with Hassan and Houlihan still in contact as they hit the last 200m. The Scot kicked hard on the bend and opened up a few metres but the American eased past Hassan and looked set to repeat her two earlier Diamond league wins as she closed on with 100m to go. However, a determined Muir still had more left and she held the advantage to win by four metres. Her last 300m was 45.2 and her last lap 61 seconds.

The 25-year-old said: “Even my arms were full of lactic acid but I felt very good at the same time. I have learnt with my mistakes in positioning and did not want to go too fast in the first half.”

Up until the Brussels meeting, the men’s 5000m had been one of the most disappointing events of the season, with no-one running inside 13 minutes. However, all that changed in a race dominated by Ethiopians.

Thanks to superb pacemaking, 2016 world under-20 champion Selemon Barega set a world junior record, Diamond League record and world lead as he went fourth all-time with 12:43.02.

However, double world indoor champion Yomif Kejelcha, who has looked in exceptional form all summer, accelerated again and blasted the third kilometre in sub-2:33 to pass 3000m in an exciting 7:44.56. Yet he could not drop Barega or his Ethiopian team-mate Hagos Gebrhiwet.

The pace got faster and Kejelcha reeled off astonishing successive laps of 60.49, 60.17, 61.10 and 60.53 to the bell. An increase in pace got rid of Gebrhiwet along the back straight but 18-year-old Barega looked easy and kicked past Kejelcha and completed the last lap in 56 seconds. Gebrhiwet rallied to take second in 12:45.82 with a tired Kejelcha third in a PB 12:46.79.

Sensational from @SelemonBarega in the 5000m!

The times further back also were incredible – Australia’s Emsley Carr Mile winner Stewart McSweyn smashed his PB and still only finished 12th in 13:05.23, before dislocating his shoulder as he fell over the finish line.

Christian Coleman in a class of his own 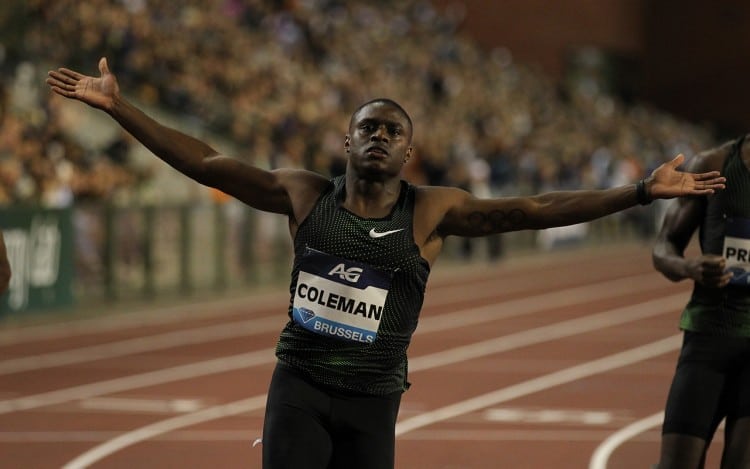 World indoor champion Christian Coleman barely beat Reece Prescod in Birmingham earlier this month but he, too, was in a different class in Belgium.

Off to a superb start in the 100m, he dominated throughout and won by well over a metre in a world-leading 9.79 to go seventh on the all-time lists. It was incredible, running into a slight headwind of -0.3m/sec and cool 18C.

Ronnie Baker, who held the previous world lead, got a terrible start (0.251 reaction time) to immediately give away a tenth but powered through to second in 9.93. Prescod was never in the battle for first but finished strongly for fourth in 9.99. CJ Ujah was a below-par seventh in 10.17.

Coleman said: “I got the trophy everyone was shooting for. This was my best race of the season. Today I put myself back in the discussion.”

Also making light of the cool conditions was Sergey Shubenkov, who made up for his narrow European defeat with an easy 110m hurdles win in 12.97. The women’s sprint hurdles was a closer race, with 0.08 covering the top four as Brianna McNeal won in 12.61 ahead of world champion Kendra Harrison’s 12.63.

This week’s AW cover star, Shaunae Miller-Uibo changed pace dramatically in the last 80 metres to win the 200m in 22.12 as she easily ran down Dafne Schippers, who was initially given 22.52 and second but clearly ran inside her lane.

The opening track race of the night was the women’s 400m and was predictably won by world championships silver medallist Salwa Eid Naser. Her 49.33 win was impressive enough but it was worth noting she had run in Bahrain’s medal-winning 4x100m and 4x400m teams in Jakarta the previous day in the Asian Games and spent much of the previous 24 hours travelling.
World champion Phyllis Francis was a distant second in 50.51.

The shock of the night came in the women’s discus as multiple global champion Sandra Perkovic suffered her first defeat for over a year. World championships fourth-placer Yaime Perez won with a 65.00m throw as Perkovic, who was struck with a heavy cold at the start of the week, had to settle for third with 64.31m. The men’s discus went to Commonwealth champion Fedrick Dacres, who threw 68.67m.

Beatrice Chepkoech was some way down on her recent astonishing world steeplechase record of 8:44.32 but her 8:55.10 has only been bettered by herself and former world record-holder – the now banned Ruth Jebet. A 2:52.76 opening kilometre from Caroline Tuigong excited the crowd and the Kenyan was well clear by midrace.

The fast pace seemed to affect Chepkoech and she looked in potential trouble at 2000m in 5:56.30 as Norah Jeruto closed menacingly but she rallied with a fast final kilometre to win by over four seconds from her Kenyan colleague who went inside nine minutes for the first time with 8:59.62.

Kenya also won the 800m. World leader Emmanuel Korir won a disappointing race with a 26.0 last 200m in 1:44.72. Poland’s Marcin Lewandowski continued his good form to finish second in 1:45.21, while Jake Wightman excelled to finish fourth in 1:45.96, just ahead of much faster athletes on paper such as sub-1:43 man Clayton Murphy.

Having won the previous night’s moderate triple jump contest, Caterine Ibarguen made it a winning double in the long jump with a 6.80m (0.3) third-round leap. Britain’s former world medallist Shara Proctor was second with a 6.70m (-0.4) but world-leader Lorraine Ugen was only sixth with 6.53m (0.2) and Jazmin Sawyers ninth with 6.33m (0.4).

Another athlete finishing the season strongly was Russia’s Timur Morgunov. He cleared 5.93m to defeat world champion Sam Kendricks, who jumped 5.88m. Former world champion Shawn Barber was third with 5.83m, despite two failures at his opening height of 5.40m. European champion Armand Duplantis flew back to Europe from university in the United States but had a rare off-day and was seventh.

The previous night’s women’s shot was won in the town square by world champion Lijiao Gong with a fifth-round 19.83m.

World junior 400m champion Jonathan Sacoor won an exciting, if slightly manufactured, non-Diamond League one-lap race to guarantee a home win. He just got the better of European medallist Kevin Borlee in 45.59 to his team-mate’s 45.62, while Britain’s Rabah Yousif was fifth in 46.72.