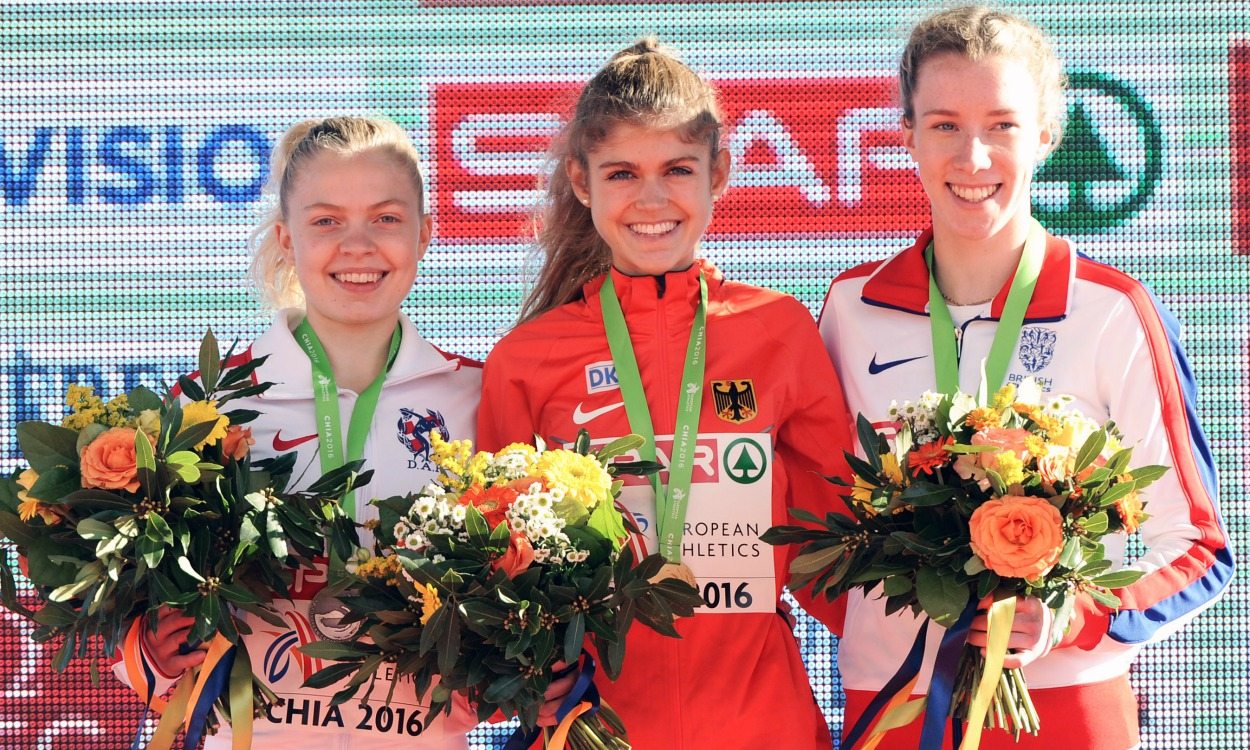 There was further medal-winning success for Great Britain in the under-20 and under-23 age groups at the European Cross Country Championships on Sunday (December 11).

Germany’s Konstanze Klosterhalfen dominated the first race of the day, clocking 12:26 on the flat and firm 4060m course to successfully defend her under-20 women’s title and claim victory by 17 seconds.

With just four minutes on the clock, world junior 3000m medallist Klosterhalfen was already pushing the pace and had created a gap of around five metres which she only continued to steadily grow.

Although gold looked decided, the battle for silver was on, with Knowles-Jones following up her silver from last year with bronze this time. Denmark’s Anna-Emilie Moller, who set a European under-20 record and national record in the heats of the Olympic 3000m steeplechase in Rio, had the stronger finish and clocked 12:43 to Knowles-Jones’ 12:52.

Britain was back in the team gold medal spot after silver last year, which came after five consecutive junior team golds. Behind Knowles-Jones, 16-year-old Amelia Quirk secured a top 10 place with ninth, with trials winner Victoria Weir just behind her in 10th and Gemma Holloway in 11th.

“It is amazing to win the bronze here, it was completely different to last year,” Knowles-Jones said. “The German girl just went today and that really strung the field out. I had to dig in as it was quite a change of pace.”

Comparing her 2016 bronze to last year’s silver, the 18-year-old added: “Last year was a complete shock, I never dreamed of winning a medal but it was more nerve-wracking this time as there was more expectation but I guess it has given me confidence.”

After 10 appearances as a competitor herself, Liz Yelling was back at the Euro Cross as the British junior women’s team manager.

In the under-20 men’s race Jakob Ingebrigtsen clearly put his all into winning the title. Stumbling over the finish line, the Norwegian, who is just 16 years of age and the younger brother of three-time European 1500m medallist Henrik and this year’s European 1500m champion Filip, held on for a clear victory ahead of Italy’s Yohanes Chiappinelli and Britain’s Mahamed.

Henrik had won the under-23 title at this event in 2012 and following in his footsteps his younger brother clocked 17:06 for the 6000m course ahead of Chiappinelli’s 17:14, as Mahamed judged his race well to gain the final podium place with a time of 17:16.

“I couldn’t pace for the silver medal , but I’m so happy with the bronze,” said Mahamed. “I thought when I caught him (Chiappinelli) that I could get rid of him, but he kept coming back. It was a fight together, but I’m happy with bronze.”

There was heartbreak for GB’s Alex Yee, however, as the talented triathlete suffered a heavy fall mid-race. Having been to the fore, the 18-year-old, who won junior gold at the ITU World Duathlon Championships and bronze at the Quarteira ETU Triathlon Junior European Cup this year, was clipped and, although he got back to his feet, the fall and a further stumble meant he was left with a lot of ground to make up.

The World U20 Championships 5000m ninth-placer battled back to finish 11th which, added to Mahamed’s individual bronze plus a 14th place finish for Josh Kerr and 15th by Paulos Surafel, helped to secure Great Britain team bronze medals behind France and Spain.

Poland’s 2015 European under-23 1500m silver medallist and Olympic 10th placer from this summer Sofia Ennaoui used her track speed to beat Germany’s Anna Gehring to the under-23 title.

The battle between the US-based Brits for bronze was won by Wright, who ran 19:42 to finish two seconds ahead of Charlotte Taylor, securing another individual medal and team gold for the GB squad.

Belgium’s Louise Carton chose to contest the senior event rather than defend her title which had left the race a little more open. Making the most of the firm and flat conditions, Ennaoui, who has run 4:01.00 for 1500m, clocked 19:21 to Gehring’s 19:24 over the 6000m course to become the first Polish female to win at this event.

Britain have only lost the team title in this age group twice and again the squad was on top. Behind Wright, who ran 19:42, and Taylor who was just two seconds behind her, Rebecca Murray finished 7th and Jessica Judd placed 12th to win ahead of Germany and Italy.

“I thought I was in for fourth place so I am delighted to get the bronze medal,” said Wright, who won at the NCAA Mountain Region Cross Country Championships last month. “You always want to win but to get a medal is just amazing.”

Belgium’s Isaac Kimeli had the strength to battle for the title in the 7970m under-23 men’s race, holding off last year’s silver medallist Carlos Mayo of Spain and Italy’s Yemaneberhan Crippa.

Mayo had finished as runner-up to Britain’s Jonny Davies at this event 12 months ago and he had to again settle for silver, finishing five seconds behind Kimeli who ran 22:48 for victory.

Crippa successfully defended his junior men’s title in 2015 and moving up an age group he again claimed a podium place after running 22:54 to deny Germany’s Amanal Petros, who finished third last year, and defending champion Davies, with both athletes clocking 23:01.

Davies’ fifth-place finish led the GB team to bronze, with Alex George in 13th, Ellis Cross in 15th and Alex Short in 25th.

A report on senior race action can be found here.

» The December 15 edition of AW magazine will include full reports, pictures and results from the championships in Chia