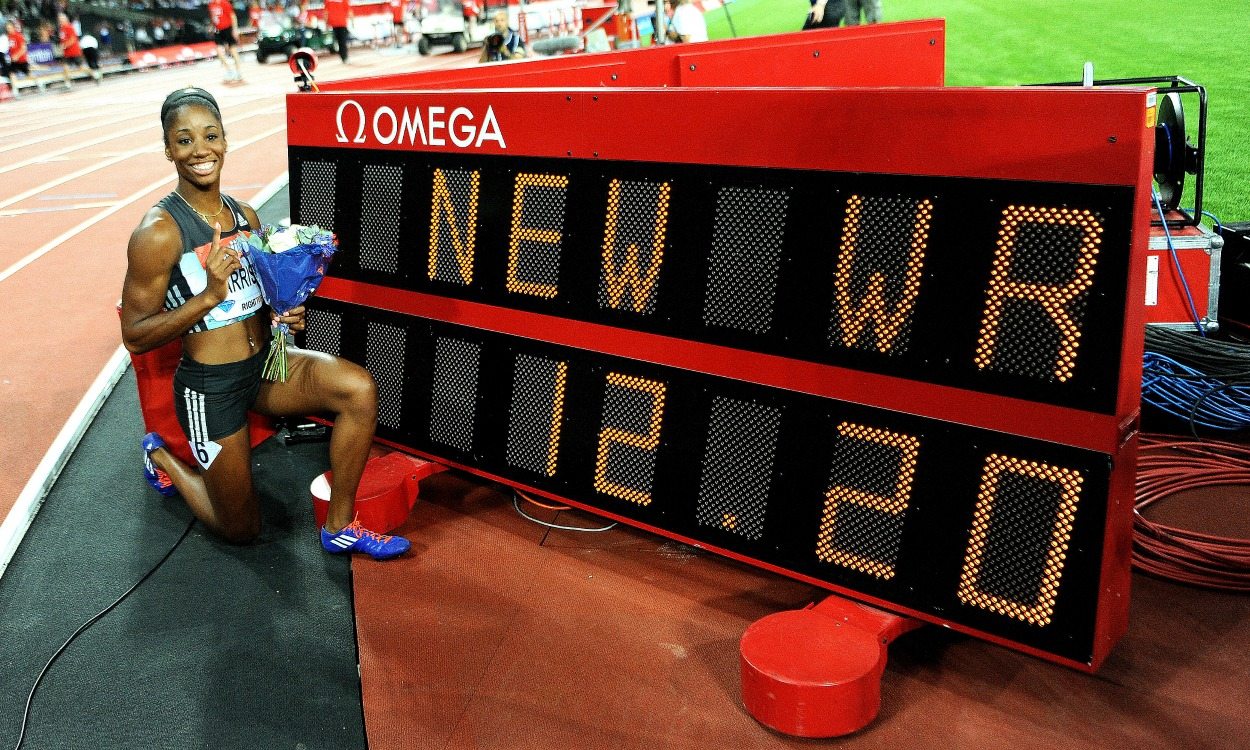 American sprint hurdler clocks 12.20 on an evening of incredible action at the Müller Anniversary Games

When it comes to bouncing back after disappointment, it doesn’t come any better than breaking a world record and that’s exactly what Kendra Harrison did with a sensational 100m hurdles performance at the Müller Anniversary Games in London on Friday (July 22).

Harrison had voiced her record-breaking aims ahead of the Diamond League meeting – with the 23-year-old having missed out on a Team USA place for the Rio Olympics she was determined to put on a show. What a show it was, as the American clocked 12.20 to take 0.01 from a record which had been set by Yordanka Donkova in 1988.

“To hear people call me a world record-holder, it sounds remarkable,” she said. “I wanted to come out here and show the world that I still have it even though I won’t be going to the Olympics. I had to give it all I had.”

Harrison had placed sixth at the ultra competitive US Olympic trials earlier this month which put paid to her Rio dreams, but she led a US top four in London, crossing the finishing line clear ahead of Brianna Rollins with 12.57, Kristi Castlin with 12.59 and Nia Ali with 12.63.

Harrison’s previous best had been 12.24 – an American record-breaking time she had clocked at the Prefontaine Classic in May. While at first it appeared that Harrison had been outside her best in London, apparently missing the world record as the clock stopped at 12.58, it was soon evident that the record-breaker had been missed by the beam at the finish line and the clock was quickly adjusted.

“Initially I saw 12.5 and I was just happy to come out here and win,” Harrison added. “I was so happy when it came up and I was feeling really blessed. It shows that even if you don’t go out there and make the team, you have to keep going and be strong. I just ran my best and look what happened.”

Tiffany Porter was top Brit, clocking a 12.70 season’s best for sixth, while Olympic and world heptathlon champion Jessica Ennis-Hill ran 13.04 for eighth in the final after proving her fine current form with 12.76 in her heat – the 30-year-old’s second quickest ever time.

Earlier on and Shaunae Miller of Bahamas had stormed to victory in the women’s 400m, clocking a world-leading 49.55 to add to her Diamond League victories in Shanghai and Eugene. Clearly ahead off the final bend, the world silver medallist powered down the home straight to cross the line 0.85 ahead of Jamaica’s Stephenie Ann McPherson. Americans Natasha Hastings and Francena McCorory clocked 50.49 and 50.73 respectively, as Britain’s multiple Olympic and world medallist Christine Ohuruogu ran a UK-leading time of 51.05 in fifth to further justify her discretionary selection for the Rio Olympics.

Emily Diamond placed seventh in 51.63 ahead of Seren Bundy-Davies with 51.81 and Anyika Onuora, who recently claimed European bronze in Amsterdam ahead of Ohuruogu, with 52.34.

“I put in a lot of work for these competitions, so I’m glad to see it’s paying off,” said Miller. “It was a great feeling as it was my first time competing here at the stadium of London’s Olympic Games.”

Ohuruogu, whose previous best this season had been 51.35 from the semi-finals in Amsterdam, said: “This season has been a lot of work, it has been hard. But we push on, that is life sometimes.

“It is progression but I kind of wanted a bit more. It’s not as easy as it looks – I don’t just turn up and run a season’s best, there has been a lot of work behind it.”

Christian Taylor had been another athlete to talk of his world record-breaking intentions ahead of the competition and while Jonathan Edwards’ 18.29m remained out of reach for now, the Olympic and world triple jump champion produced the best leap in the world so far this year with 17.78m.

“I thought the world record was there for the taking, especially on such a beautiful night,” said the 26-year-old, who produced his winning jump in the final round of the competition, but would have claimed victory with any of his three legal leaps. “I love the track and I’m happy to be back in London.”

France’s world pole vault record-holder Renaud Lavillenie enjoyed first-time clearances up to his winning height of 5.90m before three attempts at a world lead height of 5.97m. USA’s Sam Kendricks retired from the competition after two attempts at 5.90m, securing the runner-up spot with 5.83m, while Lavillenie’s fellow Frenchman Kevin Menaldo was third with 5.75m.

Like Ennis-Hill in the hurdles, Katarina Johnson-Thompson was another British heptathlete to prove her form ahead of the seven event discipline in Rio as she contested the high jump and finished third with an outdoor PB of 1.95m after attempting a would have been UK record of 1.98m. Spain’s Ruth Beitia, who recently claimed her third European title in Amsterdam, cleared 1.98m for victory, while Britain’s Morgan Lake placed joint seventh with 1.92m and also attempted a UK under-20 record height of 1.95m.

While Usain Bolt stole the sprinting spotlight (click here for coverage), France’s Jimmy Vicaut was the star in the 100m as he clocked 10.02 for victory in the final after winning his heat in 9.96. USA’s Isiah Young was second and European champion Churandy Martina of Netherlands third, clocking 10.07 and 10.10 respectively.

Britain’s Rio-bound CJ Ujah had run 10.14 to win his heat and he followed that up with 10.16 for sixth in the final ahead of Richard Kilty with the same time.

France’s Pierre-Ambroise Bosse, fifth at the recent European Championships, clocked a season’s best of 1:43.88 to win the 800m ahead of Canada’s Brandon McBride with a 1:43.95 PB and Kenya’s Ferguson Cheruiyot Rotich with 1:44.38. Britain’s Charlie Grice, dropping down in distance after a 1500m PB of 3:33.60 at the Monaco Diamond League, tested his speed and achieved another PB with 1:45.53 for ninth.

» For further coverage of the Müller Anniversary Games, which incorporates the London leg of the Diamond League series, click here, and see the July 28 edition of AW magazine for 13 pages of reports, pictures and results from London