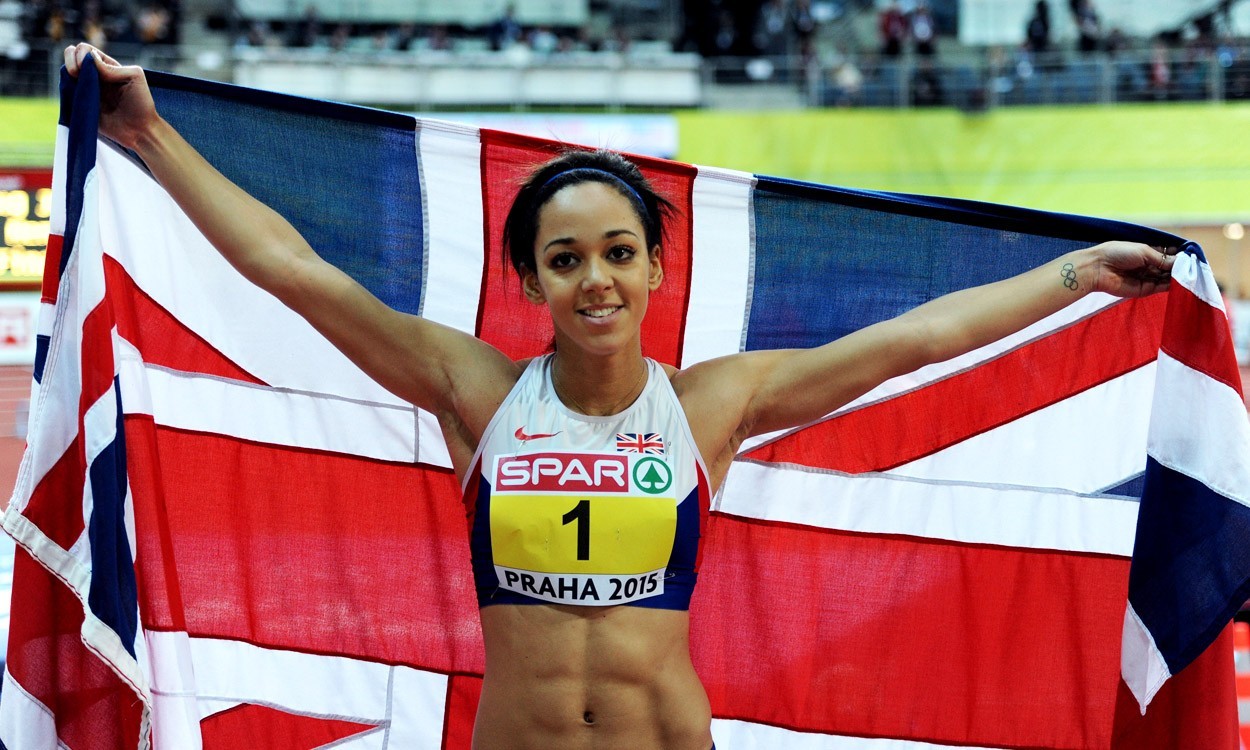 Katarina Johnson-Thompson broke the British pentathlon record and with 5000 points moved to second on the world all-time list on her way to winning European Indoor Championships gold in Prague on Friday.

Her disappointment of so narrowly missing the world record was clear to see, though, with the 22-year-old just 13 points off Nataliya Dobrynska’s mark set at the World Indoors in 2012.

After victories in the first two pentathlon events but a last place in the shot, Johnson-Thompson had returned to her winning ways in the long jump. Her first round leap of 6.89m is the best ever achieved as part of a pentathlon competition and would have been enough for individual long jump gold at six of the last seven editions of the Euro Indoors.

Having replaced Johnson-Thompson at the top after the shot, Belgium’s Nafissatou Thiam returned to second place overall after the long jump with a best of 6.33m – the second best leap of the day. Johnson-Thompson’s 17-year-old team-mate Morgan Lake, the double world junior champion, leapt 6.10m to sit sixth after four events.

With one event to go the world record-attempt was on, with Johnson-Thompson targeting an 800m time of 2:11.86 or quicker. After a solo run, she missed that mark by less than a second, but her 2:12.78 was worth 924 points and took her to a total that also breaks the world under-23 best.

Thiam secured silver with a 4696 points PB, while Eliska Klucinová bagged bronze in front of a home crowd with 4687 points for a national record.

“If someone had said to me I’d get 5000 points and a gold medal at the beginning of the day I would have taken it, but because everything was going so well and I was so close (to the world record), I think that’s what made me so sad,” Johnson-Thompson explained.

“I could have got it if I had pushed a little bit more. It’s regretful, but it’s still a good score. It’s just that I accumulated all those points to get to that moment where I could actually achieve it.

“I can’t be disappointed with my first gold in a senior championships and to score 5000 points exactly,” she added. “Only one other woman, the world record holder, has got over that, so I am completely satisfied with that.

“I have got a future, it’s not like its my last ever pentathlon. I may do another one next year at the world championships in Eugene so hopefully I can get it there.”​

“I guess that was a solid day,” said Lake. “I wasn’t overly pleased with it, but I was only a few points off the world record so can’t be too disheartened.

“I was kind of targeting the world record (going into the 800m) and I knew I had to run about 2:20 low but I really badly paced it.”

Sending a message of congratulations to Johnson-Thompson, Ennis-Hill tweeted: “Well done Kat!! Amazing performance! Sad to see my record go but couldn’t have gone to a more deserving athlete!”

British hurdlers Lucy Hatton and Serita Solomon went quicker in every round of the 60m hurdles, setting a total of six personal bests between them, to secure silver and bronze and move to third and fourth on the UK all-time list respectively.

Behind Alina Talay of Belarus who ran a national record of 7.85 for gold, Hatton clocked 7.90 to again better her own British under-23 record and Solomon ran 7.93 to also secure a spot on the podium.

Fresh from their personal bests in the first round on Friday morning, the pair had returned to the track a few hours later to again better those marks in their semi finals – Hatton clocking 7.93 and Solomon running 7.95 to dip under eight seconds for the first time.

In the men’s competition, Pascal Martinot-Lagarde led France to a 60m hurdles clean-sweep as he clocked 7.49 to beat Dimitri Bascou and Wilhem Belocian with 7.50 and a 7.52 PB respectively. GB team captain Lawrence Clarke ran 7.63 for fifth.

Sweden claimed two medals in the men’s long jump as Michel Tornéus leapt an 8.30m national record to take the title. There was another medal for the host nation as Radek Juška jumped an 8.10m PB, while Tornéus’ team-mate Andreas Otterling leapt a 8.06m PB for bronze.

The cheers from the O2 Arena crowd again went up a level as host nation favourite Pavel Maslák crossed the line as quickest in the 400m semi finals. He clocked 46.46, while Belgium’s Dylan Borlée won heat one in a 46.72 PB as Britain’s Jarryd Dunn clocked 47.29 for fifth and doesn’t progress.

European leader Seren Bundy-Davies secured a spot in the 400m final, clocking 53.00 to finish third in the second semi final won by Czech Republic’s Denisa Rosolová in 52.48. With fourth and sixth place finished respectively, Laura Maddox and Kirsten McAslan don’t progress, Maddox disappointed that she was put off her stride as an athlete moved across in the first semi final.

Turkey’s Ali Kaya was the quickest qualifier in the men’s 3000m – his 7:45.65 coming in the second heat. Finishing as runner-up to Germany’s Richard Ringer in the first heat, Britain’s Lee Emanuel clocked 7:52.3 to secure a spot in the final along with team-mate Philip Hurst with 7:52.57. Finishing 11th in heat two, Tom Lancashire won’t join his fellow Brits in the final.

Russia’s Anzhelika Sidorova and Greek athetes Ekaterini Stefanidi and Nikolia Kiriakopoulou were among those over 4.60m in the women’s pole vault to qualify for the final.