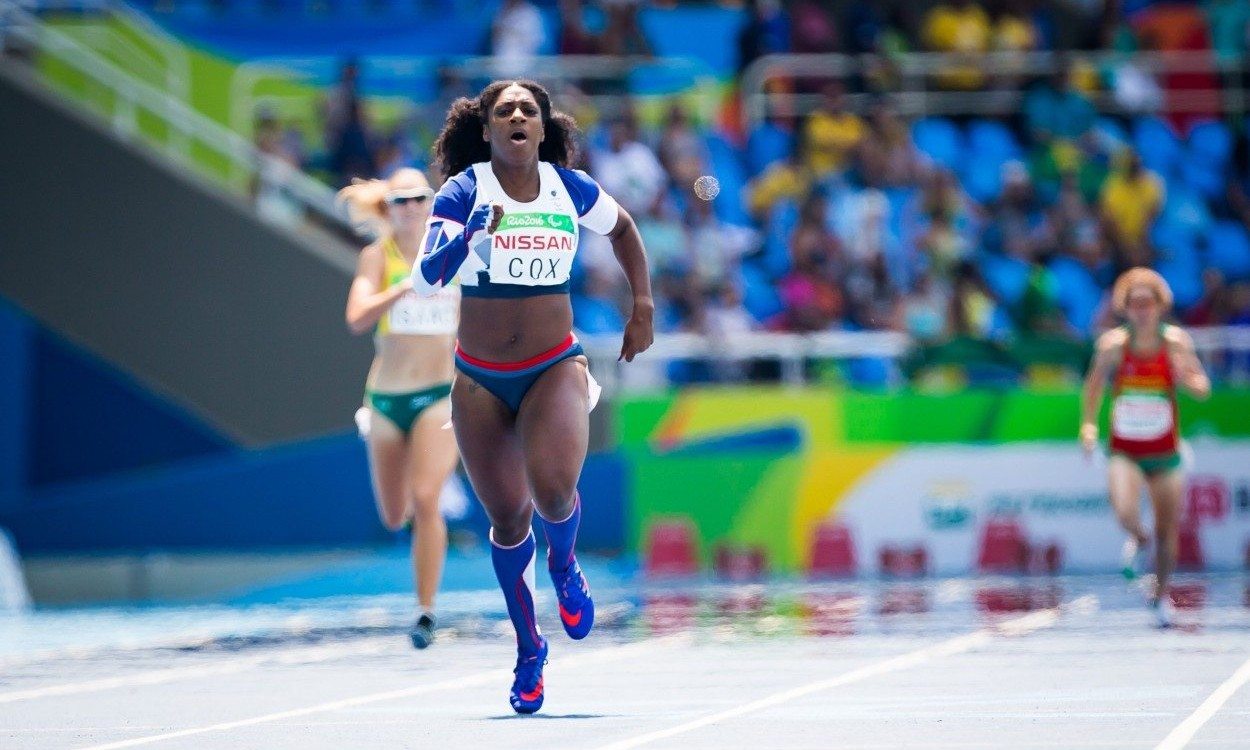 Cox wins T38 gold as Maria Lyle claims bronze for Britain on day seven of the athletics at the Paralympics, while Richard Whitehead progresses to another final

Kadeena Cox is now a Paralympic gold medallist in both cycling and athletics after she won the T38 400m in a world record 60.71.

The 25-year-old Briton, who took bronze in the 100m earlier in the Games, won a tightly fought race with China’s Chen Junfei to go well inside the global mark of 62.12 set this year by Russia’s Margarita Goncharova. The next athlete was some way back – Brazil’s Veronica Hipolito clocked 63.14 for bronze.

Cox was an able-bodied 11.93 100m runner in 2013 – the year before she was diagnosed with multiple sclerosis. It was two days after she competed in the Loughborough International in May 2014 that the Sale Harrier suffered a stroke which changed the course of her athletics career and she began the following year competing with the Rio Paralympics in mind. This was only Cox’s third race at 400m since her diagnosis and her time was a PB by more than two seconds.

On her recovery from the cycling C5 time trial on Saturday, she said: “It was really tough – I was pretty broken. My body hurt, everything was hurting but the team behind me was amazing.”

Britain’s 16-year-old Maria Lyle ran one of her slowest times of the year as she tried to build on her world silver of last year, but her 14.41 was good enough for bronze in the T35 100m.

Winner Zhou Xia set a Paralympic record of 13.66. The 17-year-old Chinese athlete came through strongly after she and Australia’s Isis Holt, who set the world record of 13.57 earlier this year, were close for most of the race.

“I’m so pleased to have won a medal,” said Lyle. “It’s great to come here – this is one of my biggest achievements. I’m not your normal teenager, but I get a lot of great opportunities and to be running on this stage is brilliant.

“It wasn’t the best time – it was a bit slow and I could have executed it better. I just need to focus on my technique because it was a bit shabby out there.”

T42 athlete Richard Whitehead, who has already won 200m gold convincingly, is trying to add the 100m title, even though his start is not his strong point. He was through to the final as the second quickest behind Australia’s world champion Scott Reardon, who set a Paralympic record of 12.22 as against the 12.38 of the faster-finishing Brit.

World record-holder Heinrich Popow, the defending champion, won another heat in 12.45. Whitehead’s PB of 12.13, set this year, is just two hundredths outside Popow’s global mark. Whitehead won’t be joined in the final by his fellow Briton Dave Henson, who claimed bronze in the 200m, as he finished fifth in 13.23 which wasn’t enough to see him progress.

“I was a little tight today; obviously after the 200m I just wanted to get the race out of the way,” said Whitehead. “After looking at the replay I’ve definitely got plenty to work on for the final. It was nice to be in the same race as the main contender (Reardon).

“I’d like to think I’ve got something in my locker – in the heats it’s not all about delivering a gold-medal performance, it’s just about getting through. I’ve got great stamina but I just need the best start. There’s no pressure on me in the final. I’m just here to enjoy the 100m.”

In the F11/12 shot, Italy’s Assunta Legnante successfully defended her title from London with 15.74m. The visually impaired athlete also won the world titles in 2013 and 2015 and was fourth in the discus this week. The Italian is in the F12 category, but behind her, Uzbekistan’s Safiya Burkhanova set an F11 world record of 15.05m to take silver.

The weight of the shot put is the same as for able-bodied athletes and Legnante was throwing a mark achieved by only four British women this year.

Having won two gold medals and one silver so far, Tatyana McFadden continued on course to gain seven medals in Rio 2016 as she qualified for the final of the 5000m with ease. The American, who dominates the big-city marathon circuit, has taken silver in the 100m and gold in the 400m and 1500m. She is still due to compete in the 800m, marathon and 4x400m.

Her time of 11:47.37 was a Paralympic record, although this was well down on the world best and she is clearly capable of much quicker as it outside her marathon PB pace.

Staying with the wheelchair events, 400m gold medallist Pongsakorn Paeyo was fastest through to the final of the T53/54 800m, while 100m winner Brent Lakatos won the other heat.

Greece’s Che Jon Fernandes took gold in the F53 shot with 8.43m. His first-round throw was threatened in the last round by American Scot Severn, who took silver with 8.41m.

Wen Xiaoyan of China leaped out to 5.14m to win the T37 long jump to add 22cm to the world record she already jointly held. Uzbekistan’s Aleksandr Svechnikov won gold in the F12/13 discus with 65.69m.

Namiba’s Ananias Shikongo set a Paralympic record of 22.48 to head the qualifiers for the T11 200m final and Cuba’s Leinier Savon Pineda was fastest in the T12 100m heats with 10.89.