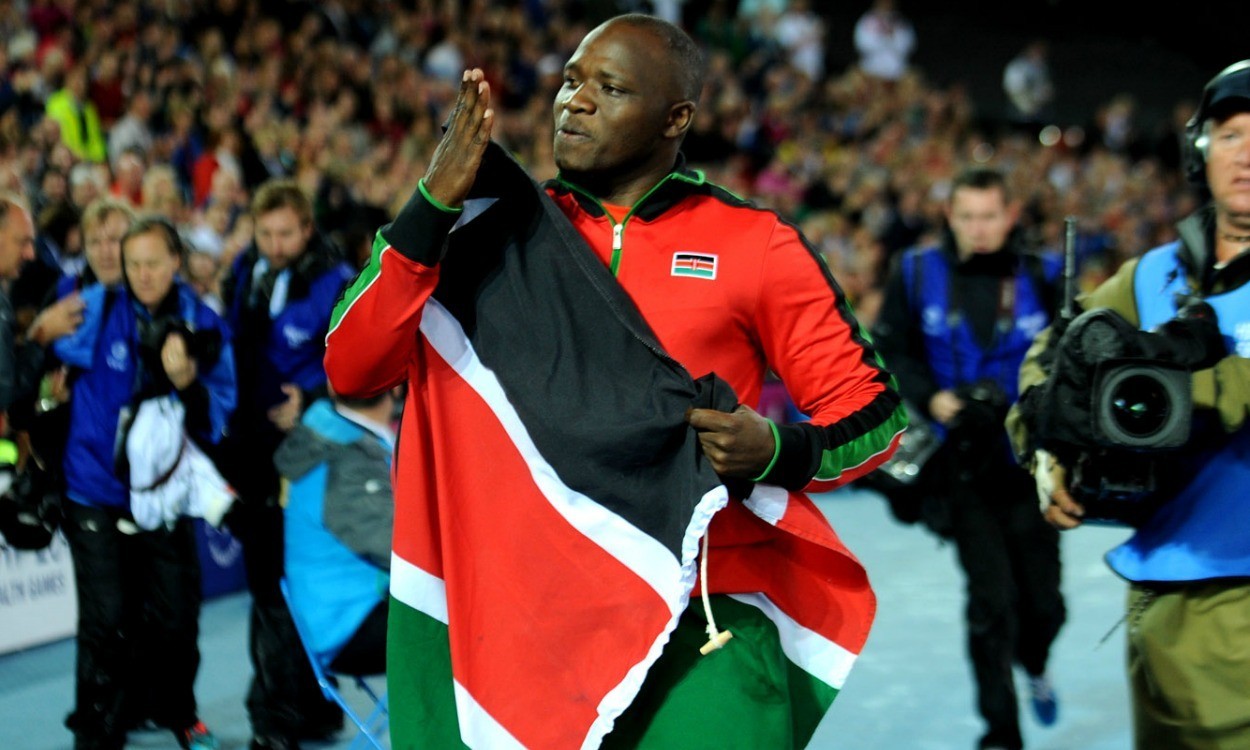 Julius Yego became the first Kenyan to win javelin gold at the Commonwealth Games, despite having injured himself during warm-up.

With his nation better known for success in distance running events, the 25-year-old proved Kenyan victories are not restricted to just the track or road as he threw a best of 83.87m on Saturday night to beat Olympic champion Keshorn Walcott of Trinidad & Tobago and become the first from Kenya to win athletics gold in a non-running event at the Commonwealth Games.

Yego, who is a self-taught javelin thrower having learnt his trade by watching videos on YouTube, admitted he had almost dropped out of the competition after injuring his groin at the warm-up track but said competing in the final was too important to miss.

His winning throw came in the third round, after which he decided to pass his remaining attempts and hope that mark would be enough to get the gold.

“It was emotional,” he said on claiming victory, “as I picked up a groin injury during the warm-up.

“I slipped on the warm-up track. I thought about pulling out, but I spoke to my coach and I decided I couldn’t pull out of this championship.”

Not only did Yego defy injury but also horrendous conditions as the competition was held in the pouring rain.

“The conditions were not favourable, but there was no head wind so that was OK,” he said.

Walcott was his closest challenger with 82.67m from his final throw, the 21-year-old himself also a pioneer for this event in a nation better known for its sprinters.

“After my third throw I took the lead and I knew it would be hard to beat so I decided to stop as I did not want to aggravate my injury further,” said Yego.

“It is great to win a medal for Kenya in the field as we have done so well on the track.”

The 2010 Commonwealth Games provided the Kenyan’s first javelin contest outside of Africa and there he finished seventh. He went on to finish 12th at the London 2012 Olympic Games and a year later finished fourth at the IAAF World Championships in Moscow with a national record of 85.40m.

Although Yego, captain of the Kenyan athletics team in Glasgow, is the first from his nation to win Commonwealth javelin gold, he is not the first from the African country to claim a medal, as John Mayaka won bronze with a throw of 77.56m in Christchurch in 1974. Walcott’s silver is the first javelin medal of any colour for Trinidad & Tobago at the Games, though.

Yego’s gold boosted Kenya to top of the athletics medal table at the Glasgow Games with a total of 10 titles claimed by his team, as well as 10 silvers and three bronzes. The nation is lucky he decided to switch sports.

“I gave up running to take up javelin because I was so slow,” he said.