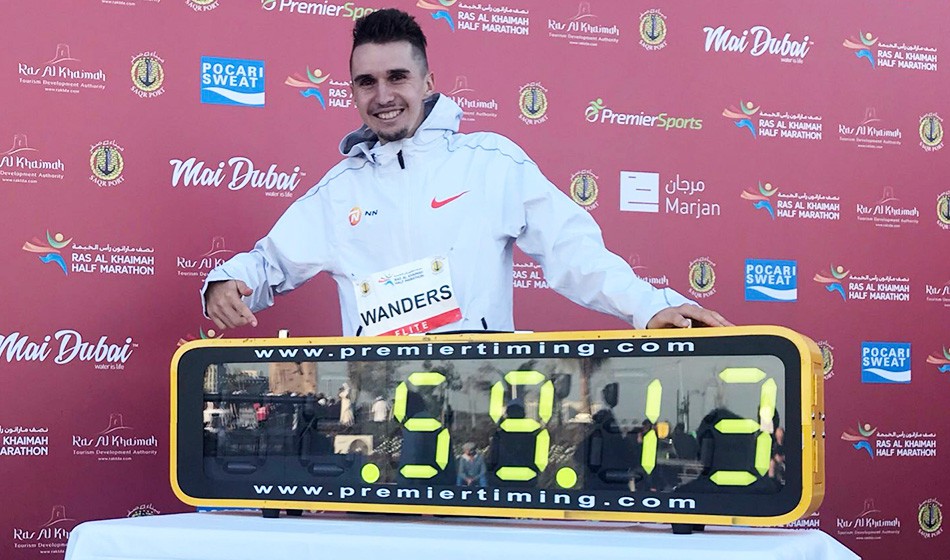 Such was the standard, that time only saw the Swiss 22-year-old finish fourth as Kenya’s 19-year-old Kiprop stormed to success, running a PB of 58:42 to deny Ethiopia’s Abadi Hadis in the closing stages.

Kiprop’s time, which matches the event record set by Bedan Karoki last year on a different course on the northernmost emirate of the United Arab Emirates, takes 39 seconds off his previous best run in Valencia last year and moves him to joint sixth on the world half-marathon all-time list for record-eligible courses.

World cross country bronze medallist Hadis clocked 58:44 to match his PB for the runner-up spot after Kiprop’s closing strength proved too much, while his fellow Ethiopian Fikadu Haftu secured the final podium place with a 59:08 PB.

While there was a good battle in the men’s race, the women’s race was even closer. After 21km of running, Teferi and her fellow Ethiopians Netsanet Gudeta and Zeineba Yimer were all still in contention but, with the finish line in sight, the 2015 world 5000m silver medallist edged ahead and held on to claim a victory from her first half-marathon finish.

The 23-year-old broke the Ethiopian record with her winning time of 65:45, with world half-marathon champion Gudeta given the same time in second, while Yimer was third just a single second back.

Kenya’s 2016 world half-marathon champion Peres Jepchirchir, who broke the then world record in Ras Al Khaimah in 2017, finished sixth in 67:36 as she continues her return after becoming a mother.

Hadis then picked up the pace with a 13:38 5km split from 10km to 15km and only Kiprop could go with him. The pair passed through 15km with 41:48 on the clock, while Wanders – disappointed that the pace through 10km hadn’t been quicker – struggled to stay with them and was eight seconds back along with Haftu and Kenya’s Morris Gachaga at that point.

By 20km the leaders’ advantage had increased to 17 seconds as they crossed the checkpoint in 55:46.

Hadis started to get a gap on Kiprop and looked like he could be on his way to victory, but his Kenyan rival was determined and kicked again with around 200m to go, first moving alongside and then past the Ethiopian, eventually securing a two-second win.

Behind them, Wanders and Haftu were battling for third and although the Swiss runner eventually missed out on the podium, he gained that European record – his fourth in less than a year – adding it to his under-23 half-marathon mark of 60:09 run in Barcelona last February and his two outright European 10km marks, first 27:32 in Durban in October and then 27:25 in Paris in December.

“I’m working for this – I’m working very hard every day,” said Wanders, who trains for part of the year in Kenya and is guided by his long-time coach Marco Jäger. “My goal is always to improve my times and now it is the European record, I hope very soon it will be a world record. I’m aiming big, but it’s my philosophy.

“I’m feeling good,” added the world half-marathon championships eighth-placer, who next races over 5km in Monaco on February 17. “I was hoping for a good time and I did, the only thing is that I was fourth and I just missed out on the podium but otherwise I’m happy.”

For Kiprop, the win provided further proof that his dedication to the sport has been worthwhile. The teenager, who grew up in Baringo County, sold the last of his three goats in December 2017 so he could afford to return to Iten for a third time after two previous unsuccessful attempts to base himself there to work towards his elite career dream.

Since then, half-marathon wins in Venlo, Olomouc and Ústi nad Lábem have followed, plus his fifth-place finish in Valencia last October, and he now has a total of 30 goats.

“At 200m I made a big move and I had the win,” he said with a smile, adding that he plans to make a move up to the marathon in December. “As I saw the finish line it came into my mind that I was supposed to win this race.”

Six athletes – Teferi, Gudeta, Yimer, their compatriot Degitu Azimeraw and Kenyans Valary Jemeli Aiyabei and Paskalia Kipkoech – formed the lead group in the early stages, with Jepchirchir settling herself in the second group along with Etagegen Woldu and Naom Jebet.

The leaders went through 5km in 15:32, with the chasing group 12 seconds back. By 10km, the lead pack was down to five, with Kipkoech unable to hold the pace as they clocked 31:02.

Jepchirchir and Jebet were 25 seconds back at this point and the gap grew to 51 seconds by 15km as the leaders clocked 46:43.

By 20km the race was down to Teferi, Gudeta and Yimer, running with a male pacemaker, and they crossed that checkpoint in 62:26 but a decisive move was yet to materialise. As the finish line neared they remained together until former track specialist Teferi edged ahead for the win.

Her 65:45 is the fastest ever women’s half-marathon debut, though she had previously started one other race over the distance – in Delhi in October – but dropped out when in the lead with around 1km to go due to dehydration.

Never before had five women finished inside 66:30 – with Azimeraw fourth in 66:07 and Aiyabei fifth in 66:14 – and just once previously had three female athletes dipped inside 66:00 in the same race.

After the race, Teferi’s agent Hussein Makké explained that on finishing she felt like she still had more to give. “She didn’t really go to her 100%,” he added.