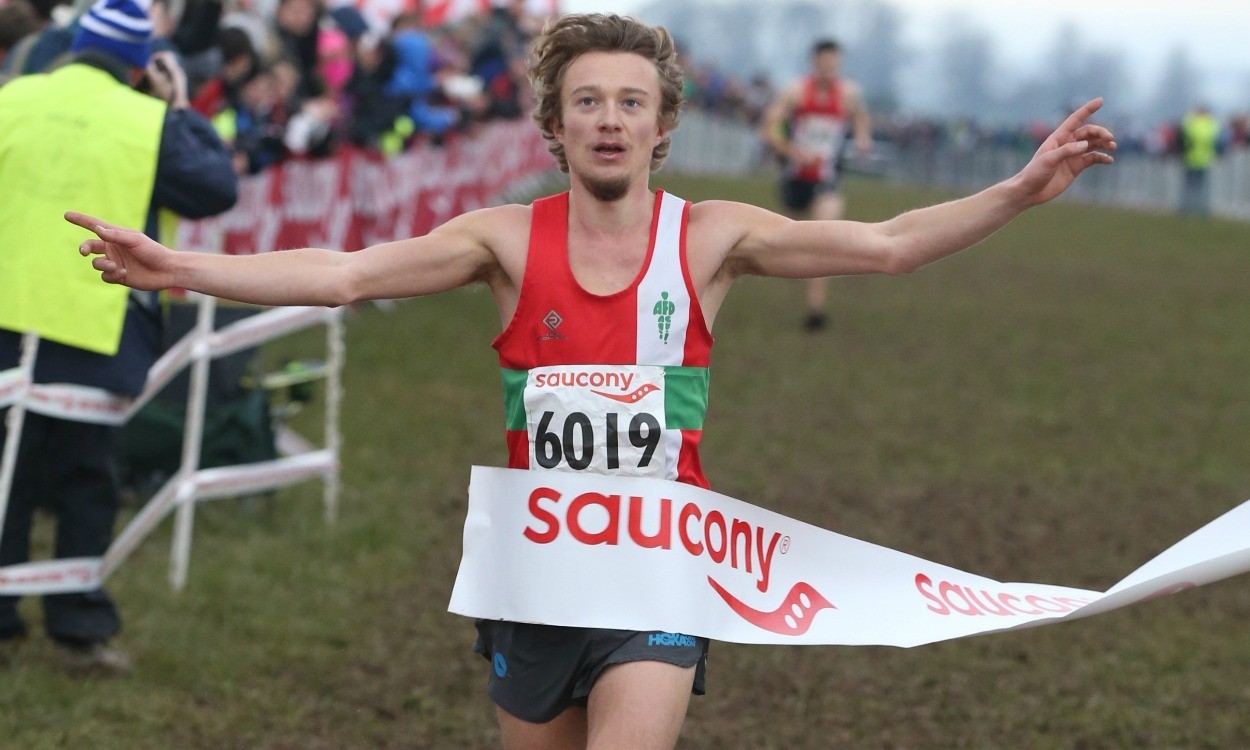 An Aldershot, Farnham & District double in the senior races at Donington Park

This year’s Saucony English National Cross Country Championships took place at Donington Park – a park more famous for motor racing and music concerts – and with cars on the circuit beside the course, which also ran adjacent to East Midlands Airport, it was one of the noisiest Nationals. However, Aldershot supporters and runners made the most noise out on the course.

The senior men’s race over 12km was won by South of England champion Jonathan Hay. The 2012 junior champion won his first senior title. It appeared as it was going to be an easy victory as the gap over his pursuers grew to around 20 seconds but as he eased off slightly as he weaved his way through masses of lapped runners he had a shock when Adam Hickey of Southend closed to within a few seconds. The Aldershot man rallied in the last 400 metres to open up a slight gap. Nick Swinburne of Morpeth matched his third place of last year.

Aldershot also took gold in the women’s 8km as Lily Partridge defended her title comfortably from North of England champion Claire Duck who was 12th in her last appearance in this race back in 2013.

Katie Holt came through strongly for third. Partridge also won a team gold as Aldershot were clear winners and they also did the individual and team double in the junior men’s race.

Ellis Cross was a surprise men’s winner. Only fifth in the South of England and 13th last year, he won by almost half a minute in 36:02 from team-mate Guy Cockle.

The individual winner was Schools international winner Isaac Akers of Corby in 19:28. He had only finished 66th in the Liverpool Cross Challenge under-20 race almost two minutes behind overall winner and fellow under-17 Ben Dijkstra, who was absent from this race.

The junior women’s race was comfortably won by European runner-up Harriet Knowles-Jones in 21:21 though she barely made it across the line as she found the course very tough. South of England champion Gemma Holloway was runner-up.

The South’s champions were successful though in the three youngest women’s event with victories for Niamh Brown in the under-17s, Josie Czura in the under-15s and Nicole Ainsworth in the under-13s. The last two were both from Portsmouth. Brown was yet another Aldershot champion and she saw off the challenge of favourite Sabrina Sinha, who had previously won under-13 and under-15 titles.

Aldershot also won the team race but Blackheath and Bromley won the under-13 girls race helped by Morgan Squibb’s second place. She had only finished 18th in the South of England event, Josh Cowperthwaite of Middlesbrough won the under-15 race from Zak Mahamed while Tommy Dawson defended his under-13 title in style.

» See the March 3 edition of AW magazine for further coverage, pictures and results