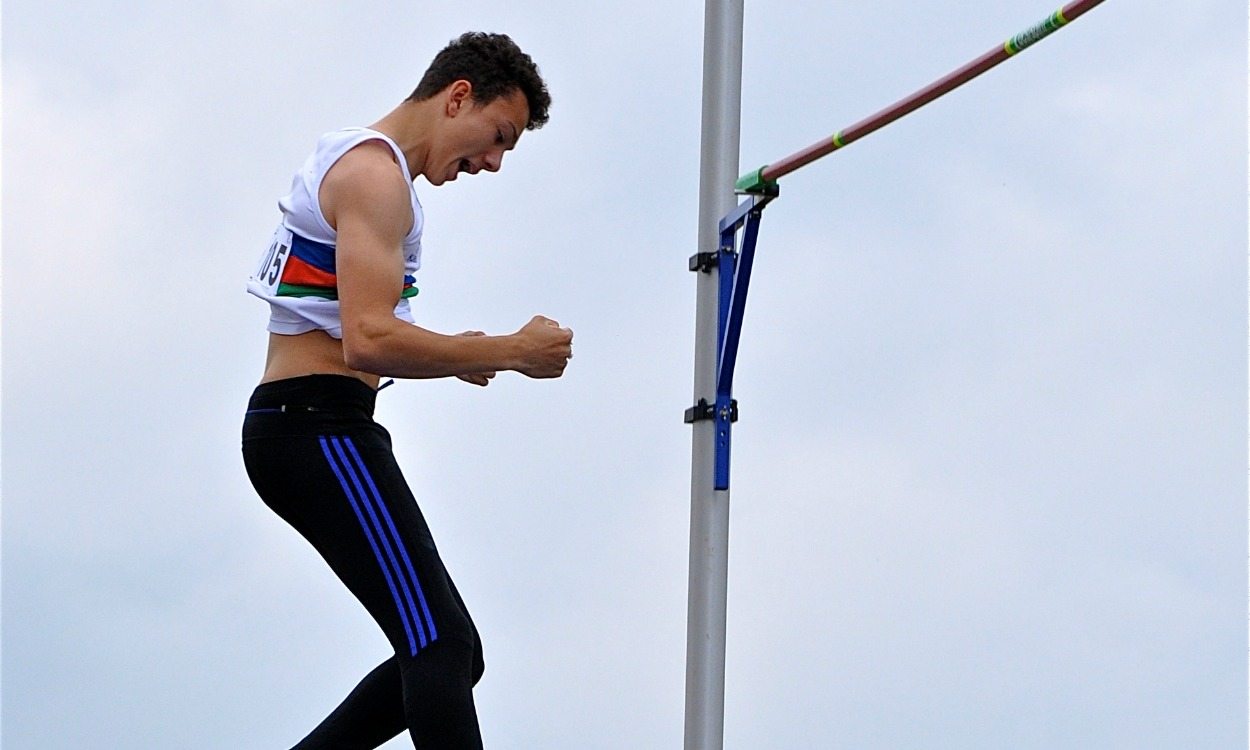 Like many pole vaulters, World Youth Championships finalist Joel Leon Benitez has a background in gymnastics. However, few could claim to have been inspired by watching their parents practise tricks high up in the air as professional acrobats.

Therefore, 17-year-old Joel was arguably destined to excel in an event that involves propelling oneself over a five-metre high bar using a pole. Travelling around the world with his parents as a youngster, the Notts AC athlete feels this experience set him up for elite-level sport.

“I went training with them every day, so I was always surrounded by people working really hard and doing amazing tricks in the air,” Joel says.

However, his parents wanted him to try a range of sports and Joel started out in gymnastics, training up to 30 hours a week until he gave that up in 2011. He went along to Notts AC and it wasn’t long before he tried pole vault. “I knew immediately that this was something I really wanted to do. I started competing as a vaulter in the 2012 outdoor season,” says Joel.

Having won English Schools, England Athletics, UK School Games and South titles as an under-17 in 2014, Joel took up an athletics scholarship at Millfield School in Somerset, where he boards during term time. Coached by Alan Richardson, Joel also has a strength and conditioning coach and a yoga teacher and he is full of praise for the set-up.

“My athletics sessions are integrated into my timetable, which means I can train during free periods and at lunchtimes, as well as after school,” he says. “I train every day except Sunday and most days do split-sessions.”

However, it seems that Millfield tries to develop the all-round sportsman. Joel adds: “Millfield takes a really multi-sport approach and there are inter-house competitions across a wide range of sports. I do trampolining once a week and I have played touch rugby, hockey, and badminton, ran cross country and swam for my house.

“I also play once a week for the house football team, as we have a league. I really enjoy boarding. I am in a small house with 12 boys, all working at a high level in their sport. Between classes and training we are really busy, but we still find time to have a good social life.”

Having ended 2014 top of the UK under-17 rankings and having broken the long-standing English Schools and England Athletics indoor records, Joel set himself the target of qualifying for the IAAF World Youth Championships in 2015, an objective he duly fulfilled.

“I just wanted to jump the qualifying standard (4.85m) as many times as possible. I managed 10 times before the selection meeting and also vaulted a PB of 5.10m. It was a dream come true to get the call from British Athletics and get my GB kit drop off,” says Joel.

Although he no-heighted in the final, Joel feels he gained hugely from the World Youth experience. “The time I spent with the team in Colombia was invaluable,” he says. “Being on the other side of the world at a major championships is completely different to anything I had experienced. I absolutely loved it and I’m so glad I had the opportunity to go. It’s made me even hungrier to succeed.”

Having already recorded a PB of 5.25m indoors in 2016 when winning the Welsh under-20 title, it is unsurprising that Joel hopes to qualify for the World Junior Championships in 2016.

“It’s going to be tough as there are a couple of very good vaulters in the under-20 age group, who will be going after the same thing,” he says. “However, training is going really well, I can feel I am already much faster and stronger than last year and I have been moving on to a longer set of poles, which will help me improve my PB.”

That aside, he hopes to win his final English Schools Championships and break the championship best.

Studying for his A Levels in business studies, world development and PE, Joel wants to go to university in the US, as he feels regularly jumping in the high-quality NCAA system will help his development as an athlete. Although predominantly based at Millfield, Joel is quick to credit the role that Notts AC and his parents play in his success.

“Pole vault is very expensive as an improving athlete and Notts AC have always made sure I have a good set of poles for each season,” he says. “My parents, along with Alan’s two-year-old son Charlie, are my biggest supporters. My dad is from Cuba and can be very loud and passionate about my vaulting. He has been known to throw Charlie in the air when I jump a PB!”

You can find further performance stats on Joel on Power of 10 here.