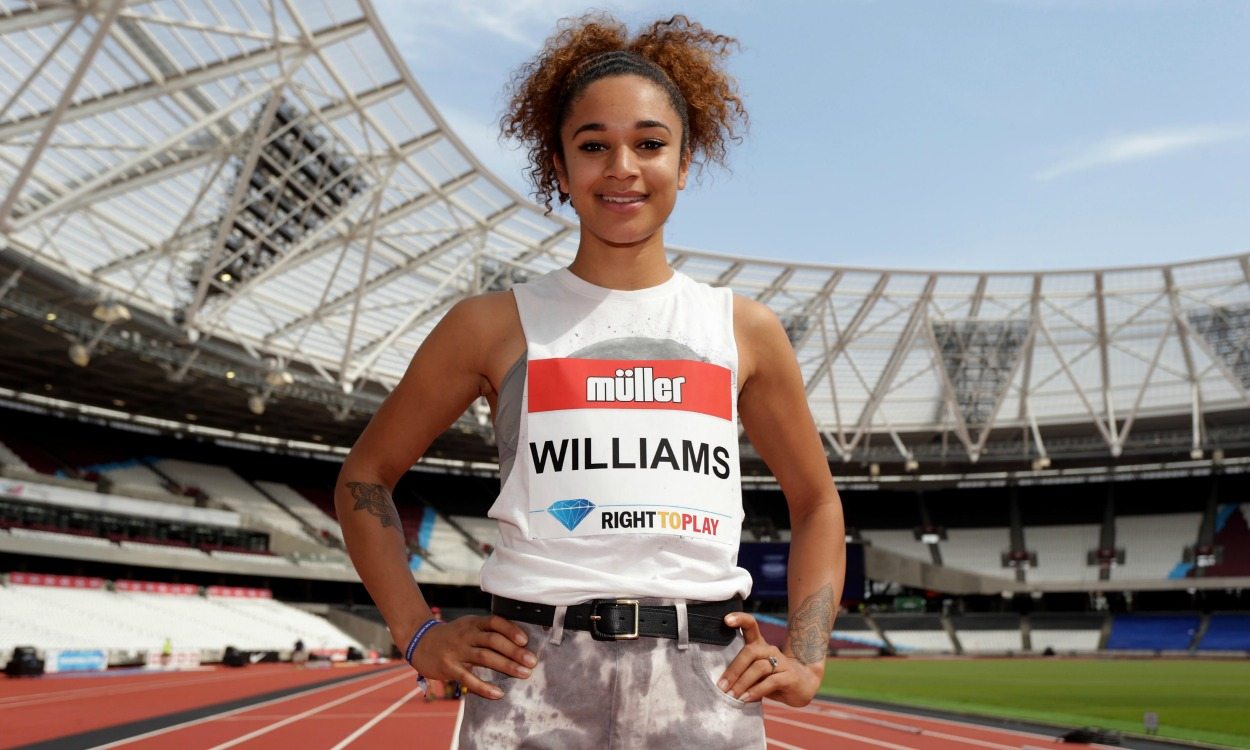 It’s been a rocky road for Jodie Williams over the past few years, but the path in 2016 has been a much smoother one than she has previously faced. She is about to become a Pokémon master and, more importantly, an Olympian.

“I don’t know if I should be admitting this, but I am [addicted to Pokémon Go]. I’ve heard there are very good Pokémon in the Olympic Park. Very rare ones,” says the 22-year-old sprinter, who confesses to having full-bloodedly bought into the latest craze. “I’ll be walking around the Olympic Park later catching Pokémon … It’s actually quite dangerous. I keep walking across the road not checking.”

Williams’ road, however, hasn’t always been quite so clear and one which presented her with a fork this year. After a physically and mentally draining four years of seemingly perennial injuries the former dominant junior gave herself two options: right to Rio or left to an alternative future that, thankfully, she needs no longer contemplate.

Since operating for much of her youth and junior career on a level above her competition and boasting an unbeaten run outdoors over the 100m and 200m which stretched from 2005 through to 2010 until she was finally toppled over the half-lap at the World Junior Championships, Williams has been pushing a boulder uphill among the seniors.

A year of progress in 2014 bore fruit with two silver medals in the 200m at the Commonwealth Games in Glasgow and the European Championships in Zurich only two weeks later, but spells of form and fitness have been all too fleeting for Williams ever since her injury problems first manifested themselves in the months before the London Olympics.

At a time where athletics in Britain struggles to stem the flow of talent out of the sport at an early age, the potential loss of another unfulfilled talent in Williams would have represented another big blow, but the toil on both her body and mind, she confessed, became almost too much for the sprinter to continue to bear.

“It was after the end of 2013 I had still had more injuries and it was just really taking a toll on me mentally more than anything else. My body just wasn’t having it,” Williams says.

“I almost decided I didn’t want to do track anymore because it was just breaking on me every session. Every time I got back something else would happen. My biggest struggle was thinking, ‘can I pick myself up any more times?’

“There have definitely been times I’ve thought, ‘I don’t know if I can do this anymore’. I think had I not made this Olympic team it would have been extremely hard for me to continue.”

Having failed to make an individual event at the World Championships in Beijing, Williams took the bold step of relocating to Altis in Arizona this past winter, turning down the relative comfort of UK Athletics funding to be part of the relay squad in the process to focus on a self-funded full recalibration.

“I’d say the move to Arizona is the only reason I’m still in the sport,” she says. “At the end of last year, having not made an individual place in Beijing and just being there for the relay and really not being in a good place, I couldn’t actually walk.

“[In Arizona] they stripped everything back and completely fixed me physically. I think mentally knowing that they truly believed in me and they’re the best coaches in the world, it was amazing. I’ve really come on a personal journey in the past year.”

It’s not just the impact of injuries which have weighed heavily on Williams, but also the pressure she and others placed on her after a stellar junior career and she has learned to brush off “washed up” jibes from people hiding behind the comfort of their social media accounts.

“I think it’s been really hard for me going from this unbeaten junior that everyone pinned their hopes on to be the next big thing to have struggled so much with injuries,” Williams says.

“Having it just be through injuries, nothing else, has been really hard and there’s been a lot of talk that I’m just a really good junior who’s never going to make it at senior level and washed up. I get those comments all the time and I think I’ve just learned to block it out.

“If you listen to all of that too much then you’re going to start believing it. That’s the position I was in this time last year. I was believing what everyone was saying but luckily I changed everything, have got a much stronger mentality and am in a much better place this year.”

So far Williams has enjoyed a largely unbroken spell of competition in 2016, resulting in selection to compete over the 200m in Rio. She may have struggled to replicate her performances of 2014, which culminated in a 22.46 personal best en route to European silver – a time which placed her second in the UK all-time rankings, now third – but the Hertfordshire sprinter is adamant her body is now in shape to recapture her best form.

“I know in Zurich my performance was better and my position was better but my body was in a terrible place,” says Williams, who placed sixth in this year’s edition of the European Championships in Amsterdam. “No one ever believes athletes when they say this but I’m in a completely different place than I was in Zurich and it’s a much better place.”

Williams is gearing up to run for only the second time of her career in the Olympic Stadium at the Müller Anniversary Games, on a new surface similar to Rio, and she hopes to hit the ground running before jetting off to Brazil.

“It’s a new surface, I think we’re the first people to run on it. The same surface as Rio so fingers crossed I’m going to run something decent.”

Things have finally smoothed out and Williams’ road to Rio is now clearer than ever before.

» Tickets for the Müller Anniversary Games are available from £20. More finish line tickets have now been released. Visit www.britishathletics.org.uk