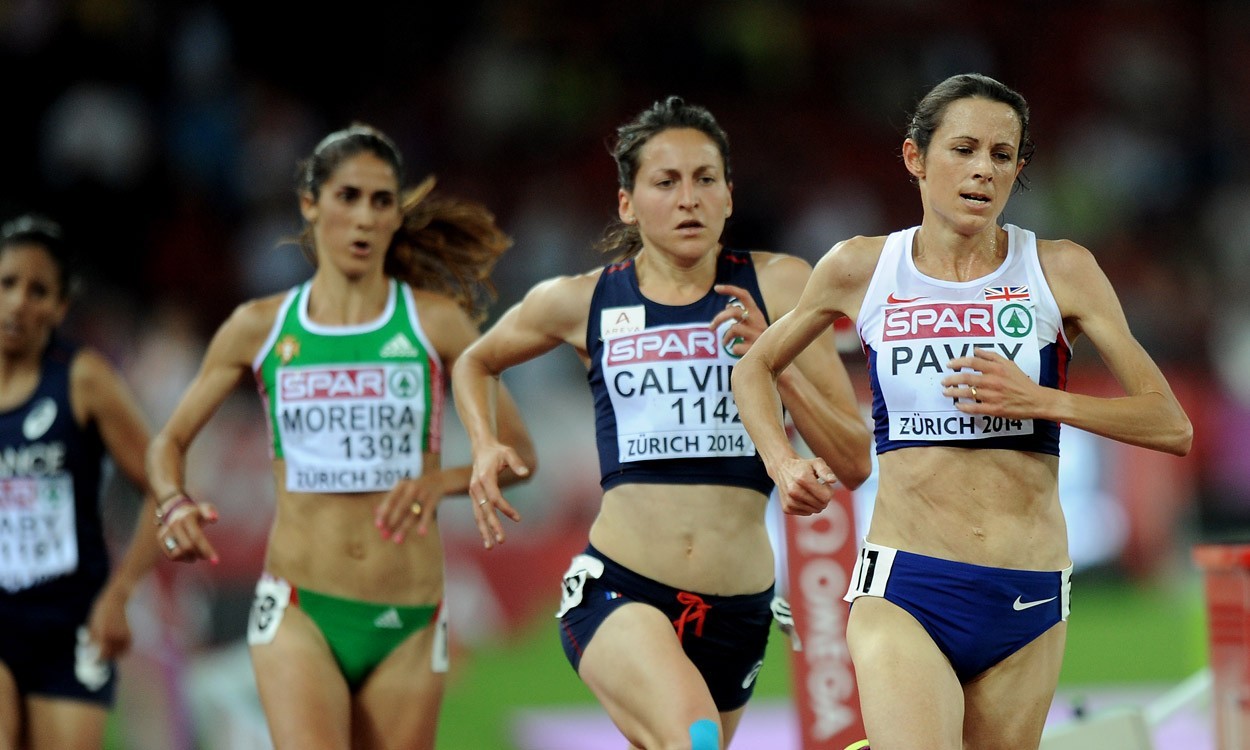 Jo Pavey again demonstrated more of the gritty determination we saw just 10 days ago when she claimed a Commonwealth medal to add the European 10,000m title to her list of achievements.

Her success on Tuesday evening ensured a golden start to Great Britain’s campaign at the European Championships in Zurich.

A superb performance saw Pavey deal with the slow pace of the race before she surged ahead over the final lap and clocked 32:22.39 to become, at 40 years of age, the oldest ever female European champion and claim her first major title.

“I really can’t believe it,” said mother of two Pavey, whose youngest child is less than a year old.

“My baby has only just turned eleven months but I’m relaxed and happy at this time of my life so I think being a busy mum has given me more endurance.

“I really enjoyed it but I found it a long way,” she added. “I just kept relaxed and went for it. I tried to run a controlled last lap and I gave it my all so I had no regrets.”

On winning her first major gold, she continued: “It’s quite funny to think that I’ve been trying for the gold medal for all of these years and to get it now at 40 is weird.”

Silver went to France’s Clemence Calvin, who had led with two laps to go but couldn’t respond to Pavey’s pace – a 66 second final 400m seeing her storm away in the home straight to finish more than a second clear. Joining her French team-mate on the podium was Laila Traby, who ran a 32:26.03 personal best for bronze. Pavey’s fellow Briton Beth Potter ran 32:53.17 for 14th, just two places behind defending champion Ana Dulce Félix of Portugal, behind whom Pavey finished to secure silver two years ago.

Traby, herself also a mother of two, explained after the race how her children had inspired her to push that bit harder. “Before coming here my younger daughter told me “Mummy, you will come third!” And she was right,” she said. “When I was still in forth position, I told myself that I had to make her prediction come true.”

David Storl claimed the first gold of the championships with victory in the shot put. One throw would have been enough for the world champion to add the European title to his collection as he launched the implement to 21.41m. The last of his three valid throws – at 20.98m – would have also been enough for the win, as 20.86m secured Borja Vivas the silver by just three centimetres, the Spaniard having broken the 21 metre mark for the first time this year. Bronze went to Olympic champion Tomasz Majewski who threw a best of 20.83m.

Although pleased to have retained his title, Storl was disappointed not to have improved on his first round effort. “I am upset despite the gold medal because I am an athlete and therefore I always compare myself to my own performances,” he said.

“Of course I achieved my main aim, but I also felt quite lonesome leading alone without anybody seriously attacking me.”

World champion Christine Ohuruogu might be taking it easier this year but she was still able to easily dominate her 400m heat, a very comfortable looking run resulting in a 51.40 season’s best to cruise through to Wednesday evening’s semi finals. Quickest in the first round was Ukraine’s Olha Zemlyak with 51.16 from the final heat.

All three of GB’s 100m men all also comfortably made it through to the next round of the competition with victories in their respective heats. Dwain Chambers, who is making a record-equalling sixth Euros appearance in Zurich having contested every one since 1998, won the second heat in 10.18 before James Dasaolu ran 10.22 to take the third heat and Harry Aikines-Aryeetey won the final heat in 10.19. Quickest though was France’s 2012 silver medallist Jimmy Vicaut who proved he is well over any injury niggles by storming over the line clear with 10.06 in the fourth heat. His team-mate Christophe Lemaitre, who took the gold ahead of Vicaut in Helsinki two years ago, had earlier won the first heat in 10.16.

Ireland’s Mark English went quickest in the 800m heats as both Brits – Andrew Osagie and Michael Rimmer – failed to progress. Clocking 1:47.38, English won the second heat as Osagie ran 1:48.31 for fifth. Rimmer’s 1:48.51 placed him sixth in a fourth heat won by Andreas Bube of Denmark in 1:47.50. Bube was followed over the line by Pierre-Ambroise Bosse, who comes into the championships fresh from a 1:42.53 French record.

The favourites all progressed from the first round of the discus competition as Germany’s world and Olympic champion Robert Harting, 2008 Olympic champion Gerd Kanter of Estonia and Poland’s 2010 European champ Piotr Malachowski had the top three qualifying marks and automatically secured their spots in Wednesday evening’s final. Defending champion Éloyse Lesueur of France leapt the furthest in long jump qualifying with 6.72m and she’ll be joined in the final by the likes of Germany’s Malaika Mihambo and Russia’s Darya Klishina.

Germany’s Kai Kazmirek leads the decathlon overnight with 4492 points. His team-mate Arthur Abele, who had occupied top spot following this morning’s three events, slipped to third on 4310 points as a 2.22m high jump clearance helped to boost 2008 Olympic silver medallist Andrei Krauchanka of Belarus to second with 4363 points. That high jump mark equals the highest clearance recorded in the multi event at the European Champs, Christian Schenk having managed the same height in 1990. Britain’s Ashley Bryant, competing fresh from his Commonwealth silver in Glasgow, slipped to 19th with 3951 points.