Jo Pavey and Greg Rutherford are BAWA athletes of the year 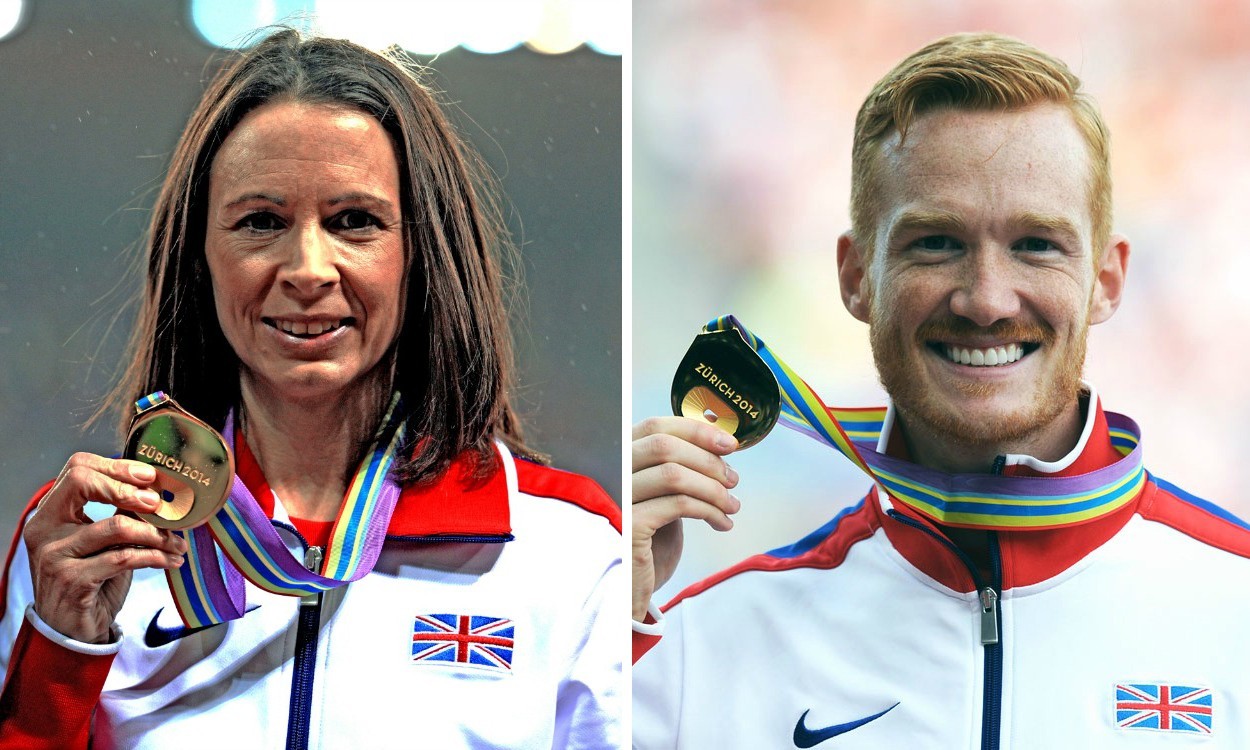 Jo Pavey and Greg Rutherford were named athletes of the year by the British Athletics Writers’ Association (BAWA) at the organisation’s 52nd annual awards staged in London on Friday.

Pavey won the hearts of the nation and the votes of the country’s track and field writers for this year’s Cliff Temple Award for No.1 female athlete by firstly battling to bronze in the Commonwealth Games 5000m in Glasgow followed by a hard-fought gold in the 10,000m at the European Championships in Zurich a few days later. This came despite her being on the eve of her 41st birthday and only 10 months after giving birth to her second child.

Rutherford, meanwhile, enjoyed a near-perfect summer of long jump domination to take the John Rodda Award for top male athlete. He began by setting a British record and world-leading mark for 2014 of 8.51m in America. After this he struck gold in the Commonwealth Games and European Championships to prove a point to doubters who felt the Olympic champion had lost his Midas touch.

Gemili, 21, won the European 200m title with a sub-20-second clocking, plus European sprint relay gold and Commonwealth 100m silver. After breaking the English record in the Virgin Money London Marathon, Farah won European 5000m and 10,000m titles and set a European best for two miles on the track.

Tiffany Porter was runner-up to Pavey for the Cliff Temple Award for female athlete of the year after winning European gold, Commonwealth silver and world indoor bronze in the sprint hurdles. Third place in the writers’ vote went to Eilidh Child, who won Commonwealth 400m hurdles silver on home soil for Scotland before taking the European title in Zurich.

The Ron Pickering Memorial Award for Services to Athletics went to Mark Shearman, a photographer who has attended 13 Olympics and whose first front cover picture for Athletics Weekly dates back to 1962.

Goldie Sayers earned BAWA’s 2014 Inspiration Award, given in recognition of an athlete who has made an outstanding performance in a single event, performed well against the odds, or is retiring after a long and distinguished career. In Sayers’ case she has fought back from multiple operations on her elbow to win the British javelin title this year and reach the Commonwealth Games and European Championships.

David Omoregie, the world junior 110m hurdles bronze medallist, won the Jim Coote Memorial Award for junior male athlete of the year. The Cardiff athlete was focusing on combined events as recently as 2013 but has switched to sprint hurdles in dazzling style and set European under-20 records this year as he follows in the footsteps of former winners of this prize such as Colin Jackson and Jon Ridgeon.

The Lillian Board Memorial Award for junior women went to Dina Asher-Smith. The sprinter won the world junior 100m title and set British under-20 records for 100m and 200m during a phenomenal season that also saw her compete at the European Championships in Zurich and top the UK senior rankings for 100m with 11.14.

Hannah Cockroft and Dan Greaves were named Paralympic athletes of the year. Wheelchair racer Cockroft also won this honour in 2013 and this year saw her claim European 100m and 800m titles at the IPC European Championships in Swansea, while F44 discus thrower Greaves won the discus at the Commonwealth Games in Glasgow.

» Want to have your say as to the athletes that have most impressed you this year? Cast your votes in the AW Readers’ Choice Awards here