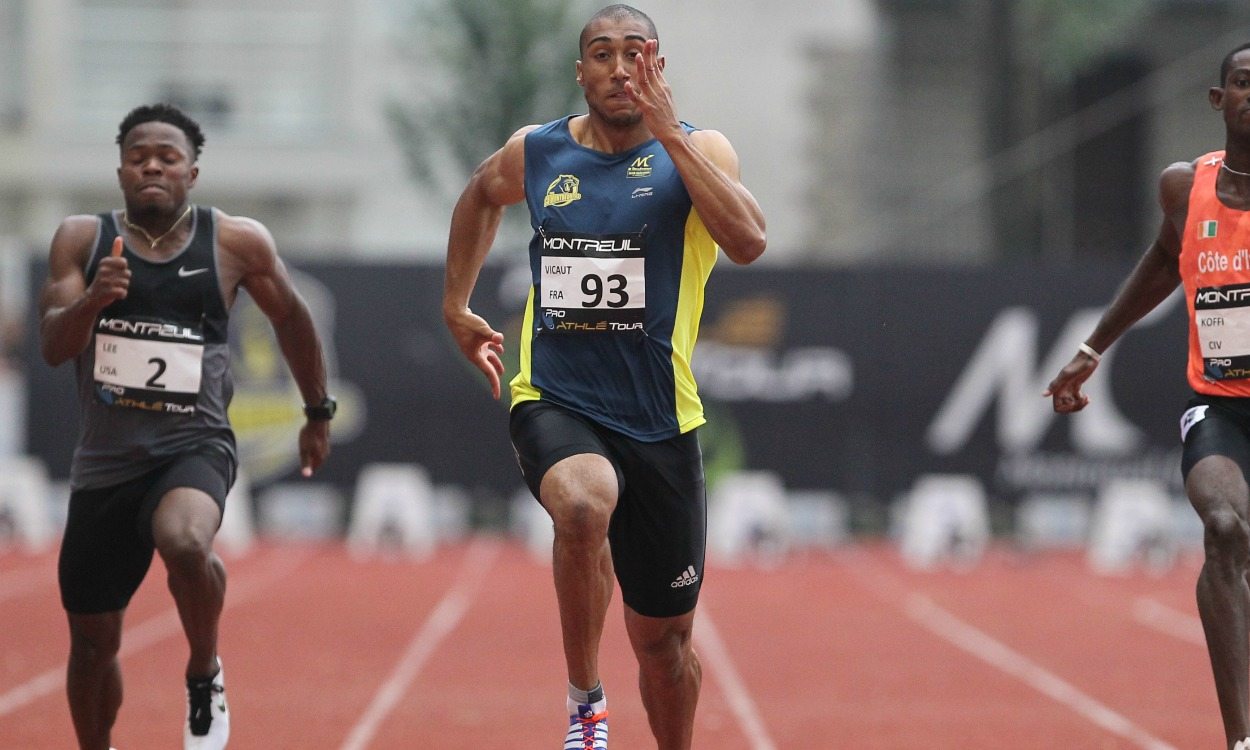 First the Frenchman clocked 9.98 but the race did not count after the field was called back for a false start and the gun was not heard by three sprinters – Vicaut, Britain’s Richard Kilty and USA’s BeeJay Lee – who finished the race.

Despite the cold and partly rainy conditions, there was a strong crowd to witness three Swiss wins. Nichole Buchler claimed victory in the pole vault with 4.70m, Kariem Hussein won the 400m hurdles in 49.47 and Fabienne Schlumpf won the steeplechase in 9:53.61.

Valerie Adams got the women’s shot put win with 19.37m, Kathryn Mitchell topped the javelin with 62.97m and Christabel Nettey leapt 6.56m (-1.0) to win the long jump in difficult conditions.

Olympic 1500m champion Taofik Makhloufi from Algeria won the 800m at the Meeting Stanislas Nancy with 1:44.40 over Poland’s Marcin Lewandowski who ran 1:44.91.

That was one of the highlights of the event which had cold weather (14 degrees) and some rain.

Malika Akkaoui from Morocco won the 800m in 2:03.06 and Tatsyana Khaladovich of Belarus the javelin with 60.81m.

The men’s shot put event at the BAUHAUS-galan will be held on Wednesday ahead of the main Diamond League meeting on Thursday.

The event will be held in the Ralambshovsparken park. There will be also competitions held for young shot putters and anybody who would like to try the event.

The Kenyan finished second in the Great Manchester Run last month in 31:25 for a time just seven seconds outside her PB which was set in this race in 2010.

First and second last year, Ben Payne and Britain’s Scott Overall, will compete in the men’s race along with Rio-bound Jared Ward.

The international meet of Cork City Sports on June 28 will have in the men’s mile Australian Ryan Gregson as the favourite. Also in the 3000m, Collis Birmingham should fight as another Australian for the top spot.

Ireland’s four-time Paralympic medallist Jason Smyth goes in search of a qualifying time for this year’s Olympics in Rio and will race opposition from a strong group of international sprinters representing six countries.

Special guest will be hammer legend Yuriy Sedykh who in 1984 set one of his world records at the Cork City Sports with a distance of 86.34m.