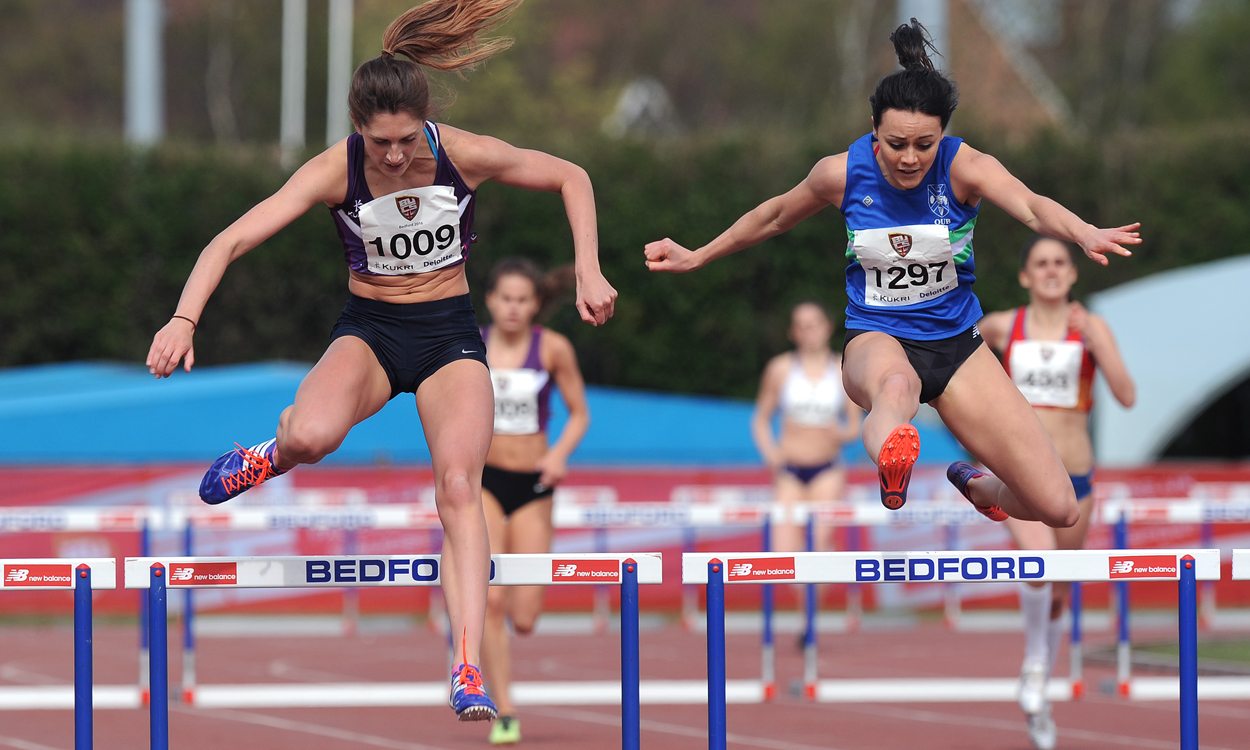 Loughborough University’s Jess Turner blew Eilidh Child’s British Universities & Colleges Sport (BUCS) championship record out of the water with a fantastic run to win gold in the 400m hurdles in Bedford on Monday.

On a day which sharply switched from sunny skies to swirling gusts around the Bedford International Athletics Stadium, Turner (pictured above, 1009) capitalised on the best of the morning conditions to pull out a 57.50 and chop 0.53 off the European champion’s time from 2008. Queen’s University Belfast’s Christine McMahon crossed the line in second, also bettering Child’s 58.03 with a time of 57.78.

Turner wasn’t the only one to record a championship best on the day as Lucy Hatton, the European 60m hurdles silver medallist, beat her own 100m hurdles record from Sunday’s heat with a 13.22 in the final.

The Leicester student is targeting a spot on the British Olympic team and showed the kind of form upon which she can build, producing three solid performances throughout as she was untroubled on her way to the BUCS title.

“I just wanted to blow some cobwebs off. I knew it was never going to be sub-13 today in the conditions, but I just had some good fun with it to be honest and I’m happy with the way it’s all started,” said the 21-year-old, who produced a 12.84 personal best last April to kick off her 2015 season.

“I just really wanted to get fully fit, get back training and see what I can do. I know 13.3 and 13.2 isn’t wonderful, but it’s a good start and I just want to progressively get faster.”

Another athlete with Rio in her sights who produced the goodS at BUCS was Jess Judd, who was a cut above the rest in the 1500m, coming home in a time of 4:20.23.

The Loughborough student took the BUCS 800m crown last year but has opted to switch up distances as she targets making a return to the British senior team this summer.

Judd said: “I’m over the moon because last year was a bit of a disaster. I feel really strong. After my cross season I’m feel strong but not fast yet.

“It was windy and it was hard but I wanted to go with how I felt rather than going for any time.”

Jonny Davies, the European under-23 cross country champion, battled it out with fellow British international Jacob Allen over the 5000m, demonstrating his superior strength in the final lap to claim his second successive BUCS 5000m crown.

European junior 400m champion Laviai Nielsen triumphed over the half-lap, putting in her second sub-24 time of the championships in the final, clocking 23.95.

In the 110m hurdles the European under-23 winner David Omoregie came away with his first BUCS outdoor title, adding to his indoor victory from February, winning in a time of 13.74.

After winning the 800m gold at BUCS in 2014, Jake Wightman returned two years later to reclaim his title over two laps, while Strathclyde’s Mhairi Hendry went one better than in 2015 to win the women’s race.

Over the 400m, 19-year-old Cameron Chalmers showed he has a bright future in the sport as he won his second BUCS championship of 2016, and Olivia Caesar powered round to also win 400m gold.

» A more in-depth report, pictures and results will appear in the May 5 edition of Athletics Weekly magazine