Jenny Simpson speeds to success on night of surprises in Stockholm 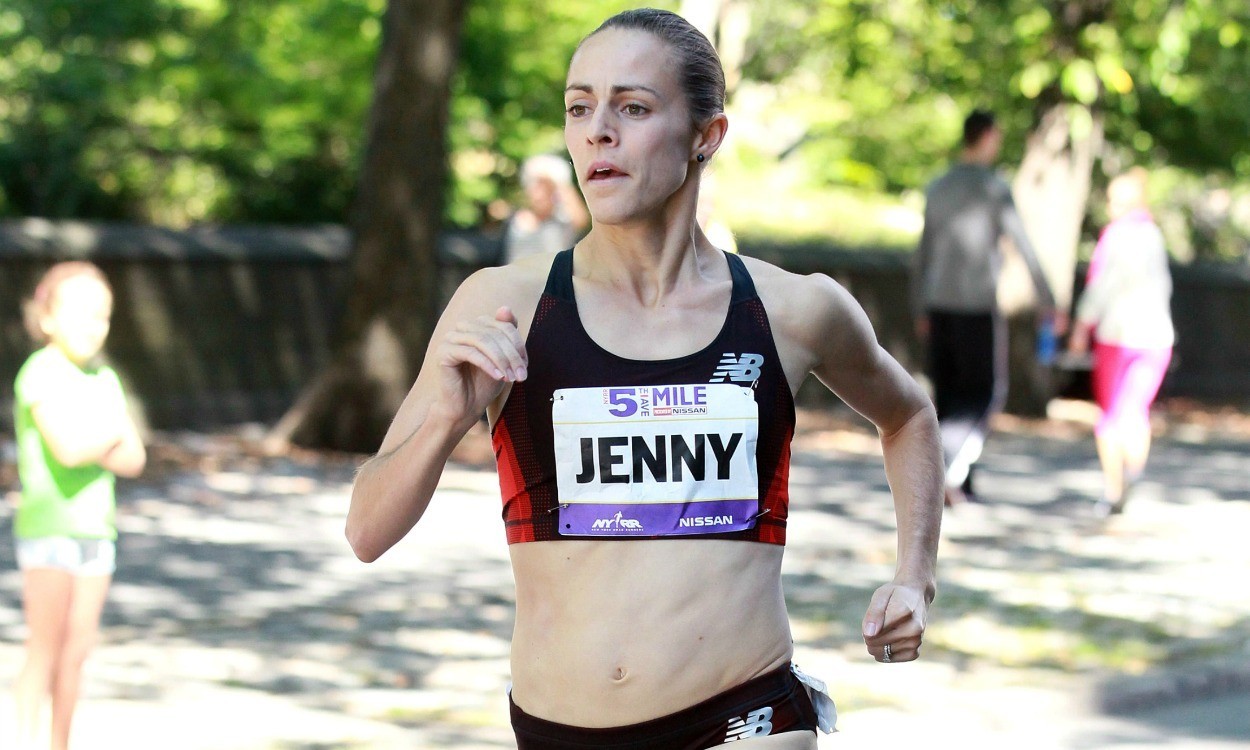 There were a number of surprise results at the DN Galan in Stockholm on Thursday evening as Diamond League action returned after a break in which events such as the Commonwealth Games and continental championships took place.

With Sweden’s Abeba Aregawi, Sifan Hassan of the Netherlands and Ethiopia’s Genzebe Dibaba in the field, it had seemed like it might be a three-way battle for victory in the women’s 1500m – the final event of the programme.

But it was USA’s Jenny Simpson who shone at the Swedish capital’s damp Olympic Stadium, the 2011 world champion pacing her race well to leave enough in reserve to run down Dibaba and Hassan on the home straight.

Dibaba had made her intentions clear from the start, the pacemaker having to seemingly work quite hard at the beginning to get back around the world indoor champion. After a 62.1 first 400m, the 800m mark was passed in 2:05 as long-time leader Dibaba surged ahead with two laps to go. Hassan had made her way through the field and followed the Ethiopian at the bell, putting her under pressure with 200m to go. But as the pair tried to stay strong to battle it out on the final straight, Simpson had more than enough left to power past them and clock 4:00.38 to Dibaba’s 4:01.00. Hassan ran 4:01.62 as Aregawi ended up back in 10th with 4:07.75.

Ahead of world champion Aregawi, who had been beaten to the European title by Hassan a week before, Britain’s Laura Muir, who had missed out on a place in the final in Zurich, clocked 4:04.71 for sixth. Her GB team-mate Laura Weightman – third in Zurich and second at the Glasgow Commonwealth Games – ran 4:14.92 in 14th.

Over in the men’s 5000m and Ethiopia’s Muktar Edris, world junior champion in 2012, broke the 13 minute barrier for the first time and he did in style, clocking a world-leading 12:54.83 to beat Kenyans Thomas Longosiwa, the Olympic bronze medallist, and Caleb Ndiku, the Commonwealth and world indoor champion who also went sub-13 minutes for the first time with 12:59.17.

Behind them, USA’s Olympic 10,000m champion Galen Rupp clocked 13:05.97 for fourth after having sat behind the pacemaker and hit the front with five laps to go but been swallowed up. Kenya’s Edwin Soi was fifth with 13:07.68 as Hagos Gebrihiwet clocked 13:12.40 for seventh.

Fresh from claiming the European 800m title in Zurich, Poland’s Adam Kszczot enjoyed victory once again as he ran 1:45.25 to beat the likes of Djibouti’s world indoor 1500m champion Ayanleh Souleiman and his fellow Pole Marcin Lewandowski. With 1:46.04, Botswana’s newly-crowned Commonwealth and African champion was back in fifth, one place behind France’s Pierre-Ambroise Bosse.

Emma Coburn was another American middle distance runner to run a smart race in Stockholm, the 23-year-old running her own race to finish third in a 3000m steeplechase won by Ethiopia’s Hiwot Ayalew in 9:17.04. With 9:20.31, Coburn finished one place ahead of world and Olympic bronze medallist Sofia Assefa, while Sweden’s European silver medallist Charlotta Fougberg ran 9:35.74 for ninth.

The conditions had an impact on many of the field events and USA’s Tianna Bartoletta was aided by a +2.3 m/sec wind in the women’s long jump to record her winning 6.98m in the final round, a mark just four centimetres further than Éloyse Lesueur of France managed with a +2.6 wind reading. Over in the men’s event and Commonwealth triple jump champion Godfrey Khotso Mokoena of South Africa managed a season’s best of 8.09m (+1.2) for the win.

The conditions weren’t quite as helpful to Renaud Lavillenie, however, as the world pole vault record holder – who claimed his third European title in Zurich – failed all three attempts at his opening height of 5.60m to bring his winning streak of more than 20 competitions to an end. His opening height would go on to be the best anyone could manage, world indoor champion Konstadinos Filippidis of Greece winning on countback, as a total of five athletes failed to register a mark.

A drama-filled women’s 100m hurdles was won by Queen Harrison in 12.66 as she enjoyed the smoothest run, the start having been interrupted twice as athletes were called back after being held for quite some time and Olympic champion Sally Pearson being disqualified. France’s Cindy Billaud – who claimed European silver behind Britain’s Tiffany Porter recently – suffered a heavy fall as Harrison’s fellow American’s Nia Ali and Dawn Harper-Nelson came through for second and third, 12.96 and 12.99 their respective times.

There was another disqualification in the men’s 100m and this time USA’s Mike Rodgers was forced to walk away from the track. Victory went to Jamaica’s Nesta Carter who ran 9.96 aided by a +2.0 m/sec wind to finish ahead of Keston Bledman of Trinidad and Tobago with 10.09 as Britain’s 9.96-man Chijindu Ujah clocked 10.10 to pip Nickel Ashmeade with the same time. Ujah’s fellow Briton Harry Aikines-Aryeetey – bronze medallist in Zurich – ran 10.20 for fifth.

Over in the women’s 400m and Jamaica’s Novlene Williams-Mills clocked 50.09 in wet conditions, the Diamond Race leader beating four-time Olympic and five-time world gold medallist Sanya Richards-Ross and world indoor champion Francena McCorory, the American duo clocking 50.27 and 50.65 respectively. Earlier on and the first Diamond League action on the track had seen Michael Tinsley victorious in the 400m hurdles in a time of 49.60 as Javier Culson clocked 49.84 behind him.

Olympic champion Allyson Felix put herself ahead in the 200m Diamond Race, her 22.85 seeing her ahead of fellow Americans Tori Bowie, Joanna Atkins and Jeneba Tarmoh. Felix now sits two points ahead of double Commonwealth champion Blessing Okagbare of Nigeria. Ahead of the Diamond League track action and Britain’s Rabah Yousif dropped down in distance to run a 20.97 200m in a race won by USA’s Dentarius Locke.

Back out in the field and Finland’s newly-crowned European javelin champion Antti Ruuskanen launched the implement to 87.24m for another victory as Commonwealth champion Julius Yego of Kenya threw a best of 84.67m for fourth. USA’s 2007 world champ Reese Hoffa threw 21.06m to win the shot, while Croatia’s Sandra Perković, who claimed her third European title on Zurich to go with her world and Olympic golds, threw 66.74m for another discus victory. World indoor high jump champion Mariya Kuchina of Russia – silver medallist in Zurich – won the competition in Stockholm with a best of 1.94m.