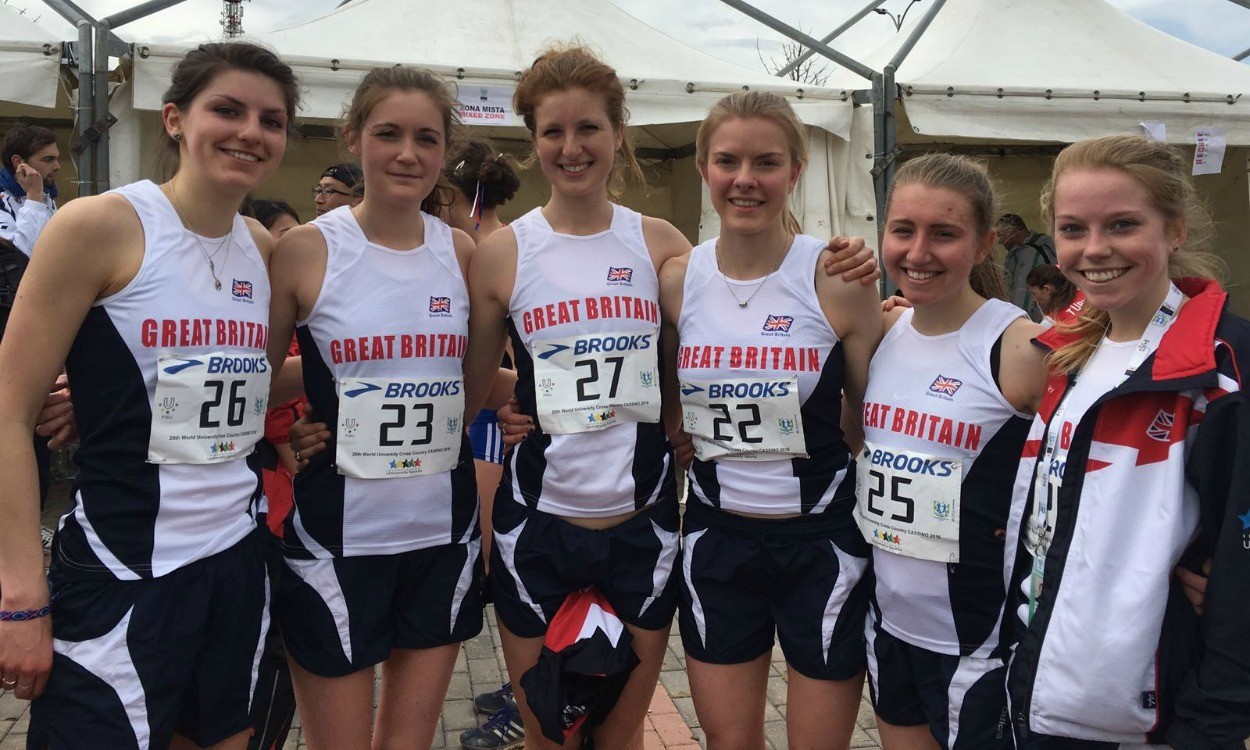 Where would you most commonly find a bunch of students over a weekend? Possibly not in the middle of a field in a small town called Cassino. Well, I tell you what … they are missing out!

This weekend six girls and six guys travelled out to Italy to represent GB in the World University Cross Country Championships. Although no one actually knew where Cassino was (luckily I don’t think any of us study geography!) we landed in Naples on Thursday evening and then travelled about an hour to the hotel.

Upon arrival we immediately investigated what the WiFi password was, clicked in the digits and logged on to various social media sites to make sure we hadn’t missed out on any important gossip. Luckily dinner was ready for us too, so we all swiftly moved on and sat down to eat, before heading to bed for an early night.

Friday morning was fully packed, with a 9am excursion to Montecassino and accreditation collection. We arrived back at the hotel in time for lunch, where we were treated to some Italian pasta, before I headed out on a short jog before race day. Being in a strange place, and on the side of a main road, finding somewhere to jog wasn’t the easiest, but as ever the adventurer, I managed in the end!

Heading out to check the course was next on the agenda, and I think I can account for all of us when I say we were a little horrified to see that it wasn’t a typical flat and fast European course! Although fantastic for spectators, the course consisted of what can only be described as boggy, dense clay base and a twisty-turny mountain climb that was to be repeated four times for us girls and seven for the boys.

After walking the course, collecting half the ground in the process, and wishing that we were in a flat field somewhere, we hopped back on the bus back to the hotel. Cassino then hosted their opening ceremony which was different, but interesting all the same (although possibly a bit long!) before we had some food and headed to bed.

Saturday morning and the alarm went off at 7am, giving us about 1 hour 45 before we had to meet to leave for the race. The good thing about racing abroad is that we usually stay within a mile of the course, meaning that there isn’t a long journey! After demolishing a bowl of porridge and some Italian bread, I was all set to head off.

Although the course may not have been exactly to my liking, the weather was. A lovely change to the Arctic conditions in the UK, and not too hot for racing.

Upon arrival, we made camp in the athletes’ tent, ensuring that we displayed the GB flag in all its glory. As the race was due to start at 11am, I began my warm up soon after arriving, which was great as I hate hanging around! Trying to locate a toilet proved slightly problematic, as they provided just two, but in true cross-country style, we all seemed to manage (you get the idea…) and resolved the issue!

Just before the race we gathered as a team and then made our way out to the start line. As there were no starting pens, and half the start line was flooded, we ganged up and ensured we were placed in the best possible part for a clear run! After a few final strides, a long wait for the gun and a false start (yep, they do even happen in cross-country!) the bang went and we were off.

In true championship style the race went off like we were being chased by a pack of wolves and it remained this way for a good 600m before it settled a tiny bit! The course was relentless, up, down, up, down, followed by boggy wet clay and overgrown roots, before beginning the up and down again. There were no chances to ‘relax’ and finding your stride was difficult!

After the first of four laps, I found myself at the front and tried to push on as much as I could from this point. I have no turn of speed, so I wanted to try and build a gap if possible. Over the next two laps I managed to break away and open a gap of about 25 metres, but working from the front and on my own was very tough. With the addition of steep climbs (something I try to avoid as much as I can!) I began to suffer.

The last 1500 metres was just one lap too many for me, and failing to break away any further I was caught and overtaken over the last 500 metres, where two Japanese and a Turkish athlete took me. I fought as much as I could for the line, but I just could not find anything else and had to settle for fourth (the worst) position, with just eight seconds separating the top four places.

This was soon forgotten though as we discovered that we had packed so well that we had come second place overall as a team! Second in the World Universities … not bad really!

I think what we were most excited about though was each being awarded a mascot frog – #greenythefrog – rather than the fact we had performed so well as a team! It was great to get up on the podium, although having to negotiate rather technical positions to enable all six of us to fit on the podium was a bit of a comedy act.

We collected our medals and our frogs and had a few photos before the girls went off to warm down and I headed to anti-doping.

What a great day and a fantastic experience! These opportunities don’t come around all the time. Championships like this only happen once every two years, so to be able to say that I’ve been and left it all out on the course is a great feeling. It’s events like these that provide us athletes the chance to make steps further forward and learn how to act and race in major competitions.

Being surrounded by great team-mates and fab team management makes the whole experience even better, with a fantastic atmosphere.

With just a closing banquet to end the day, which was a very fishy affair, we all enjoyed an evening of celebrations before heading home on Sunday.

A weekend I will never forget, and a weekend that has provided me with stepping stones for the future. Thank you to everyone involved … you guys made it!

» You can read more from GB international Jenny Nesbitt on her blog at runwithasmileblog.wordpress.com