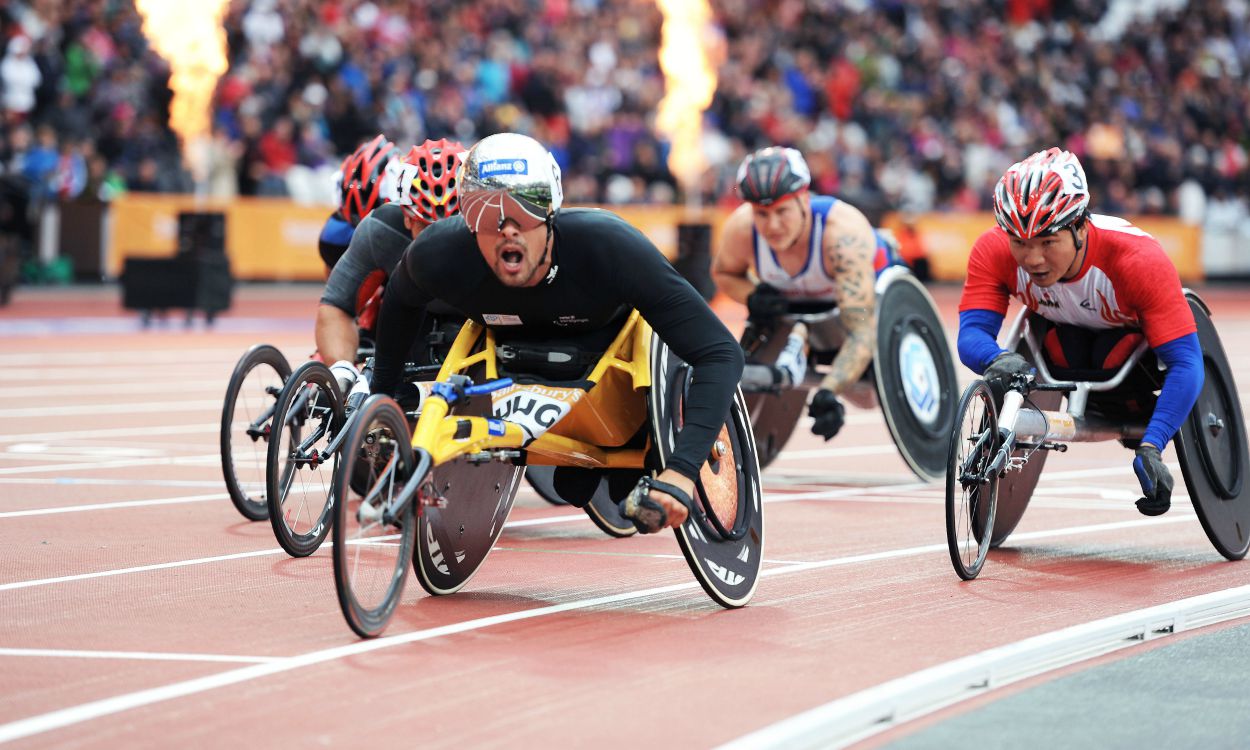 Hannah Cockroft, Jonnie Peacock, Richard Whitehead and David Weir were among the British athletes back at the scene of their London 2012 Paralympic triumphs on Sunday as the IPC Athletics Grand Prix Final returned to the British capital for the final day of the Sainsbury’s Anniversary Games.

‘Swiss silver bullet’ Hug had been looking to inflict his first defeat against the ‘Weirwolf’ in a major track race and with Weir below par having missed around three weeks of training through illness in the run-up he wasn’t able to pose his usual threat. Going straight to the front, Hug had built up a five-metre lead on the rest of field early on and although the chasing pack reeled him back in with two laps to go his finishing strength was enough to see him victorious in a stadium record of 3:04.15.

Weir, who had moved into third at the bell, lost a couple of places in the home straight and finished fifth in 3:04.80.

Hug, explaining how he had also recently suffered a heavy cold, said: “It was nice to be back and win for the first time in this stadium, it was really special. I wanted to win and it is a good feeling.”

With the IPC Athletics World Championships in Doha in October his focus, Weir said: “It wasn’t a great performance but I’ve been hampered with illness and pulled out of a meeting in Switzerland recently with a shoulder injury.

“I’m not trying to make excuses,” he added, “the guys were great today. I thought I’d be up there because the training has gone well this week but it gives me an indication of what I need to work on over the next couple of weeks.”

Richard Browne was another to turn the tables on one of Britain’s Paralympic champions as the world record-holder held off Peacock in the T44 100m – 10.96 to 11.02.

“I definitely feel good about the win rather than the performance itself,” said Browne. “The time was not good at all but it was great to come out here and perform in front of the British crowd.”

Peacock, who had received a roaring reception from the home fans, said: “I am actually a little bit happy, obviously I’m frustrated but for me it was really clear what I did wrong – it was the first and last bits of the race.

“I just spoke to my coach and my transition was fine, I came up strong and would have had a lot more top speed if I had just chilled out a little bit. I’ve got to move on to the next race now and just take my lessons from this.” 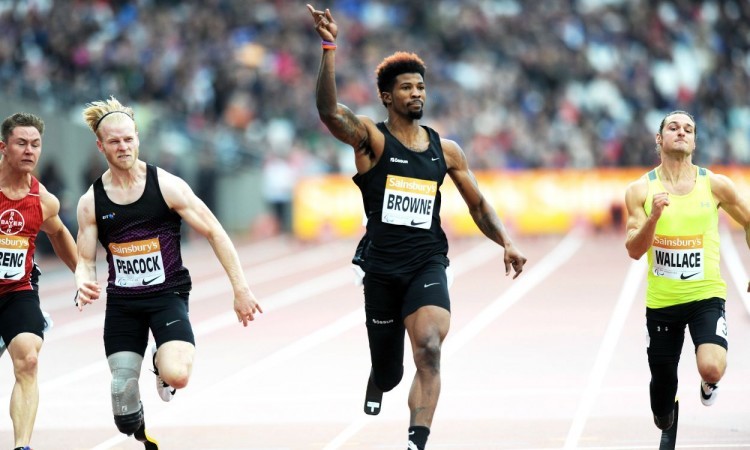 There were world record-breaking performances by two of Britain’s athletes as they made the most of the home support to run the races of their lives. First Georgina Hermitage ran 62.48 to break her own T37 400m record mark before sprinter Sophie Hahn also improved her own T38 100m record with 13.00 into a -1.3m/s headwind.

Hermitage had clocked 62.70 in Berlin five weeks ago to break a 15-year-old record and despite feeling like she had gone out too hard in the first half she held on to take victory.

“I think I nearly got a PB over 200m,” she said afterwards. “I came off the gas a bit round the bend, I saw the clock ticking down and thought I had overcooked it but I’m happy.

“I felt really tired in that last 100m and the crowd just carried me through. I know it sounds clichéd but it definitely does help.”

The home fans didn’t have to wait long for the next record-breaking run as Hahn was among those to next take to the track. Despite the wet conditions, the 18-year-old world champion took 0.04 off her own record to beat Russia’s three-time Paralympic gold medallist Margarita Goncharova with 13.07. Hahn’s fellow Briton Olivia Breen – competing on her 19th birthday – was third in 13.42.

“It was absolutely amazing, the crowd and the track were incredible,” said Hahn. “It was such a shock, I’m just so happy.”

Also receiving a very warm welcome by the crowd was Cockroft who continued her winning ways in the London stadium. The double Paralympic champion and multiple world record-holder clocked 63.67 for a two-second victory in the T34 400m ahead of her fellow Briton Kare Adenegan, the 14-year-old 2015 Virgin Money Giving Mini London Marathon winner.

Paralympic and world champion Whitehead was another to lead a British 1-2, this time in the men’s T42 200m. Using his trademark storming second half he held off a fast-finishing David Henson, who won the 2014 Invictus Games and captained the British team, 25.79 to 26.53. There was a European record-breaking throw by European champion Jo Butterfield in the F32/51 club throw as she launched the implement to 21.50m in the third round to better her own F51 mark and also break the stadium record.

Britain’s Commonwealth T12 100m champion Libby Clegg claimed victory over double that distance in a close T12 200m, clocking 25.22 for her second-quickest ever time, despite an injury-interrupted build-up. She later said how the result had provided a good confidence boost ahead of Doha.

Switzerland’s triple European champion Manuela Schar, who also has a world marathon title and three Paralympic medals to her name, won the T54 1500 in 3:38.50, crossing the line ahead of USA’s Chelsea McClammer. British teenager Jade Jones, the Commonwealth bronze medallist, clocked 3:45.30 for third to finish ahead of her fellow Britons Shelly Woods and Samantha Kinghorn.

Getting the action underway on day three of the Anniversary Games had been the men’s F57 discus and that event was won by Egypt’s Metawa Abouelkhir with his final round throw of 43.64m. Women’s F20 shot put victory went to Russia’s Antonia Baranova after her 13.35m from the fifth round, while winning the women’s T42/44 long jump was Italy’s Martina Caironi, the Paralympic and European T42 100m champion who also won European long jump silver in Swansea, leaping 4.33m in the second round. David Blair won the F42/44 discus from his fellow American Jeremy Campbell – a throw of 56.70 for 988 points sealing victory.

Germany’s Markus Rehm dominated the T42/44 long jump, the Paralympic champion and T44 record-holder jumping a stadium record of 7.83m in the final round. The 26-year-old, who has a PB of 8.29m, had claimed the 2014 German title when competing against able-bodied athletes and recently leapt 8.11m for the furthest distance managed in this year’s event but in London he explained how he will not be considered the national champion as he was competing “out of the ranking”.

» Full results are available via britishathletics.org.uk