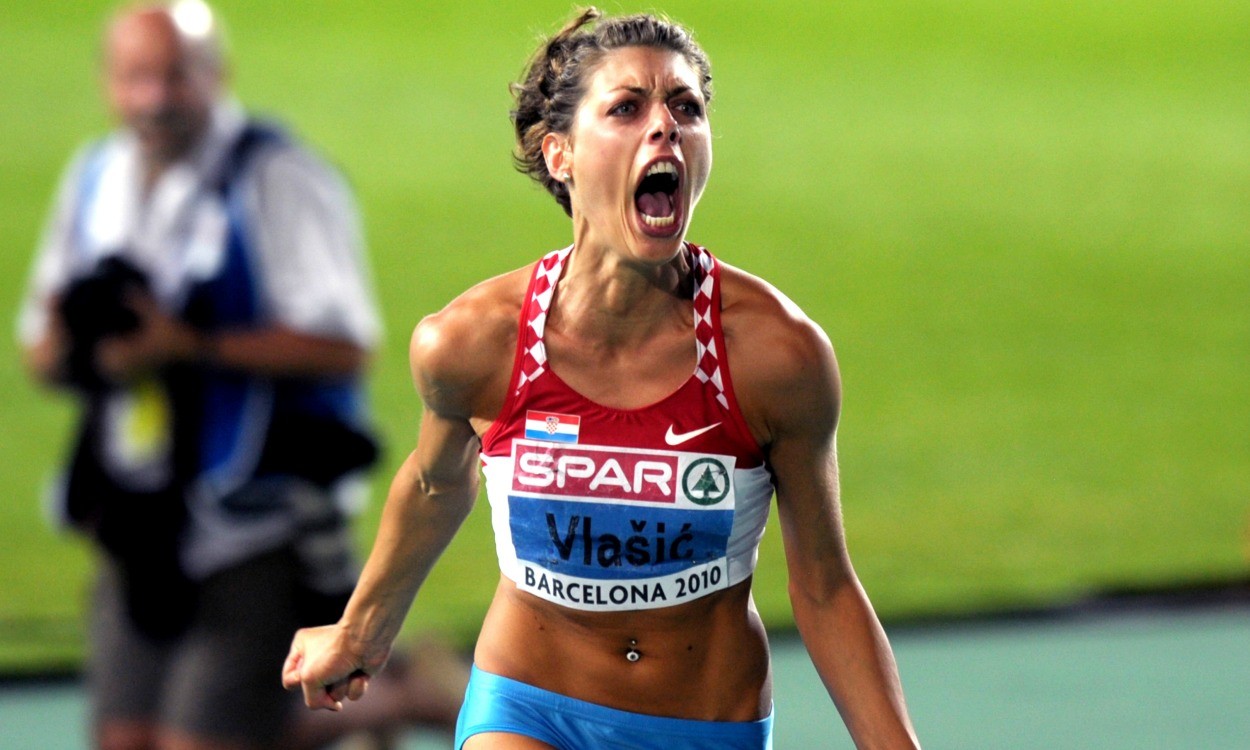 It is always good for aspiring high jumpers to observe the different styles of preparation and run-up of elite practitioners. For instance, Croatia’s Blanka Vlasic, like many of her male and female contemporaries, spends a considerable amount of time standing quietly, feet together underneath her head and arms hanging by her sides, thinking through or visualising what she is about to do and what she wants to happen.

Sometimes she has her mouth open, sometimes it’s closed. But having satisfied herself with her mental preparation, Vlasic takes a step back with her right foot and leans backward so that most of her body weight is taken by that foot.

Then she looks forward to where her feet are about to land and starts her J-shaped run-up with long, almost slow-motion, strides, arms moving in sync, before accelerating, crucially using her eyes to look over the bar to where she wants to go.

A few paces later she obtains lift-off. Interestingly, apart from the lean forward from the pivot point of the ankle joints to initiate running forwards, Vlasic remains pretty upright throughout the process.

New world indoor champion Vashti Cunningham, however, starts the process very differently. Unlike Vlasic, she doesn’t want to spend too much time in quiet-feet-parallel standing contemplation – she wants to get moving.

So, having placed her left foot behind her, Cunningham leans forward from her ankle joints very much like an 800m runner at the start line, which means that her body weight is taken mainly by her front foot. She then sways to and fro a little.

Throughout this preparatory phase Cunningham’s eyes are mainly focused about three or four feet ahead on the ground in front of her, though occasionally she looks up over the bar. Then, with her head, neck, back and rear leg arranged in an elegant diagonal line she takes off, arms pumping, only decreasing her forward lean as she runs the curve, before launching herself upwards.

It’s certainly not an orthodox-style Fosbury Flop, but when Cunningham gets the elements of the sequence right it’s an incredibly effective way to jump – which explains why the 18-year-old US schoolgirl is causing such a stir in athletics circles.

Both Vlasic and Cunningham are hugely impressive athletes. However, these variations in technique raise the interesting question of whether one method of preparation and run-up is better than another.

Sports scientists will no doubt point out that the only way to find out is to run a series of controlled experiments to identify better and worse ways of moving in a diverse population of elite high jumpers.

In the meantime, developing elite high jumpers can conduct their own experiments to find out whether they can gain a centimetre or two by adding or subtracting something from their preparatory repertoire.

As a teacher of the Alexander Technique, a psycho-physical method for restoring or improving coordination, and with a long-standing interest in athletics, I’m always looking at how an athlete’s body works as a whole.

I pay particular attention to the balance of an athlete’s head on their neck because this relationship acts as a master reflex in the body.

How? Well, because any tightening of the large neck muscles, such as the trapezius or sternocleidomastoids, that attach to the base of the skull, necessarily exaggerates the forward curvature of the neck (cervical) and lumbar parts of the spine, and diminishes one’s internal length (the distance between the crown of the head and soles of the feet).

In turn, this imbalance will transfer the basic work of supporting an athlete’s body weight against gravity from the non-fatigable, slow-twitch muscle fibres of the back musculature to the very fatigable, fast-twitch fibres of the leg muscles. If this happens, a kinaesthetically-attuned athlete will register that they are no longer experiencing ‘springiness’ or buoyancy but instead feel heavy or tired.

This deterioration can obviously have an impact on mood and confidence. But if the athlete can improve the relationship between their neck, head and torso, they will come out of that physical and psychological slump and feel more alive, more comfortable in their skin, muscles and joints, and go on to improve their performance.

In an ideal world, an Alexander practitioner would use gentle manipulation of an athlete to demonstrate good and bad head balance on the neck and how that influences muscular tone in your torso, legs and arms.

But in the absence of that experience, here are a few pointers to improving your general coordination, which is the basis for good high jumping:

» If you are someone who likes to stand quietly, feet parallel, before beginning your run-up, pay particular attention to the balance of your head on your neck. You might find it useful to think of the crown of your head relaxing (but not actively pushing) skywards away from the front of your heels. Keep in mind that your knees should not be braced back, nor should you stiffen your toes or ankles.

» Keep your lips gently together without tightening your lower jaw (the jaw joints are just in front of your ears). Also don’t stiffen or press your tongue against your teeth, cheek or palate. Instead let it lie quietly on the floor of your mouth. This will ensure an open airway and quiet nasal breathing. It will also help you avoid the danger of over-breathing or hyperventilating, which will trigger the release of stress hormones into your bloodstream, causing your muscles to stiffen.

» Many high jumpers interfere with the elasticity of their shoulder girdle by clenching their fingers and stiffening their thumbs, or making their hands into fists, before or as they begin their run-up. Before moving it’s much better to think of your shoulders releasing away from each other (alternatively think of space in your armpits) and then, arms by your sides and without stiffening your elbows or wrists, gently open your fingers towards the ground without interfering with the balance of your head on your neck. This manoeuvre will help to stretch your arm muscles and generate release in your shoulder girdle. Try to maintain that muscular elasticity as you move.

» At all times look out to ensure that your field of vision, including your peripheral vision, is as open as possible – don’t overly concentrate, focus or narrow your field of attention, in other words. This way you will be more relaxed, feel more in control of your preparation and run-up, even if things don’t go according to plan. Be aware, also, that in many ways your eyes lead your movement, but that your eyes can and should work independently of your head. For example, if you look up over the bar to where your head is going to travel or down at the ground where your feet are going to land, your head doesn’t have to move or otherwise get involved. It can remain poised on top of your spinal column as your eyes, brain and the rest of your nervous system do all the necessary planning for your jump.

» Before beginning your run-up keep in mind that the upward direction in your body, especially along your double S-shaped spine, should always take precedence over any forward motion. When most of us go from standing into walking or running forwards we make the big mistake of throwing our body forward and pulling our head (the skull) down to the shoulders and shortening the spine.

» A good tip: if video monitoring is not available, while standing quietly, carefully place the palm of one hand or your index finger at the rear of the base of your skull to monitor your head balance. If you feel any downward pressure through your hand or finger as you begin to move, you know you have not only stiffened your neck muscles but also lost muscular elasticity throughout your body. It’s very difficult to undo that sort of overall contraction while in movement so, rather than carry on to the jump it’s better for you to start again.

» As you go from standing to running remember to release up and forward at the pivot point of your ankle joints so that your whole body moves freely as a lengthening unit. Most importantly, be careful not to start your forward lean at your hip joints, which will almost certainly cause you to stiffen in the torso and legs, and lose height.

» As you employ the knee drive at take-off and your arms stretch upwards it’s all too easy to pull up or hunch your shoulders, and pull your head down on to your neck. In training, take time to learn how your fingertips can efficiently lead your arms upwards while leaving your triangular-shaped shoulder blades flat on your back and your head freely poised. You’ll then be able to reproduce this movement in competition.

» Dr Sean Carey is an anthropologist and honorary senior research fellow in the School of Social Sciences, University of Manchester. He is a member of the Society of Teachers of the Alexander Technique (STAT) and teaches the technique in London and St Albans. For more information, see Alexander Technique in Everyday Activity: Improve how you sit, stand, walk, work and run (Hite: £18.99) which is available to order here