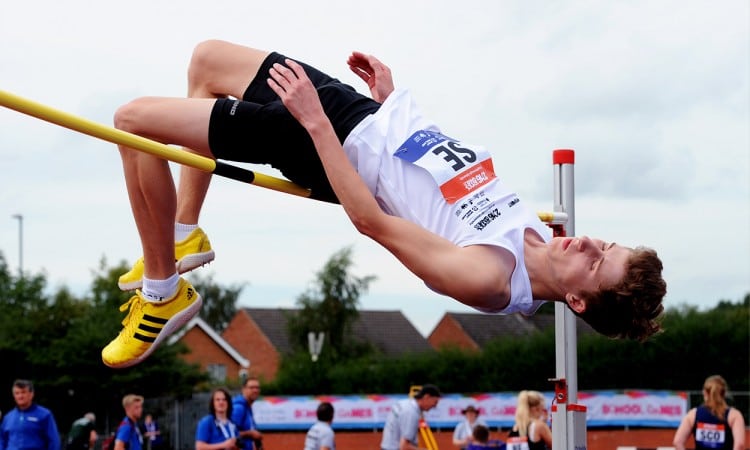 The Chelmsford high jumper is looking to make an impact this summer, writes Steve Roe

For high jump specialist Thomas Hewes there have been many triumphs – and some temper problems too. There was the time when he failed, in his eyes, to perform as was hoped at the English Schools Championships in 2015. “I grabbed my shoes and stormed off,” he recalls.

Another trauma of sorts occurred the following year. It was one in which Tom did not improve, and he considered quitting athletics, until his parents and his coaches persuaded him to carry on and be more positive.

Taking that sage advice has paid off, for when he competes these days Tom is not just good but quite outstanding.

Moreover, the 18-year-old has adopted a philosophy that applies to all those hoping to reach the top. “I now realise,” he says, “that every success starts with a failure.”

Tom’s new attitude has taken him to international level. Last year he competed for GB at the European Under-20 champs in Grosseto, Italy, and remembers the experience with pride: “To be able to represent your nation is something most people can only dream of but for me it became a reality,” he says.

“It has given me all the experience I need to take with me as I hope to qualify for the World Juniors in Finland this year.”

The qualifying standard for that event is 2.17m and trying to take Tom there is coach John Herbert.

There could hardly be a more experienced teacher. Herbert was Commonwealth triple jump champion in 1986 and twice represented Britain at the Olympics. Tom is one of numerous stars under his wing and he shares the teenager’s belief that hard graft will bring its rewards by saying: “You’ve got to put the work in to get where you want to be.”

Darren Stratton – who looks after Tom’s fitness and conditioning needs – and the lad’s former coach Phil Sergeant have also played their part in his development.

Tom went from 1.60m to over two metres under Phil’s guidance but insists there was more to their partnership. “He didn’t just care about how high over a bar I went but was also concerned about my school work and life outside of athletics.”

It wasn’t too long ago, after moving from Phil to John, that Tom was selected to represent Essex in combined events (although oddly had never taken part in one) but turned the chance down because of shin problems. Plus, in any case, he has always been first and foremost a high jumper.

He is not a bad long jumper, though, and will this season try to get something over seven metres from his current PB of 6.64m.

Surprisingly Tom’s favourite athlete is not a jumper. “It’s Mo Farah,” he says, “for his determination and dedication. I loved his autobiography, too.”

From his own event? It has to be Mutaz Essa Barshim, the Qatari who became world champion in London last year. “He’s incredible to watch, a real cool character,” comments Tom.

Finally, to conclude this interview at the Lee Valley Arena, Tom mentions that his mother’s maiden name was Lerwill. He wonders if his family could be related, however distantly, to Sheila Lerwill – she broke the women’s high jump world record in the 1951 and won a silver medal at the Helsinki Olympics Games the following year.