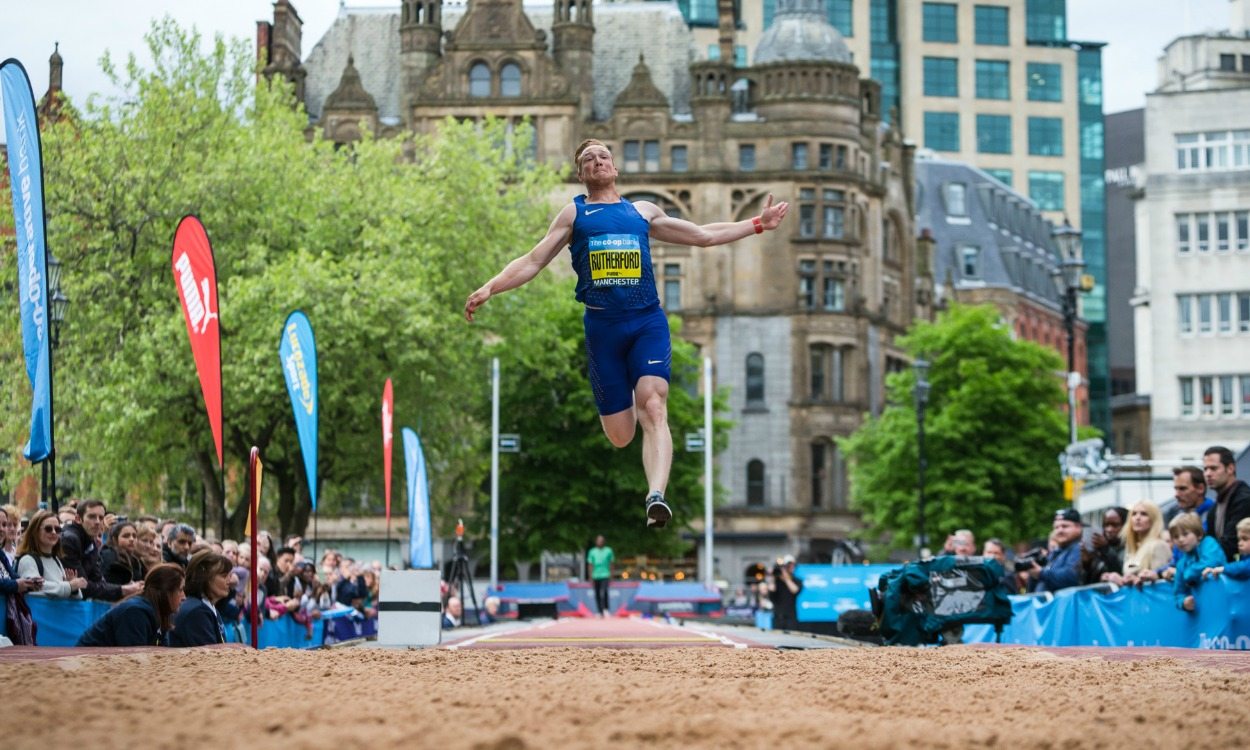 The ‘grand slam’ long jump champion continued his winning streak in Olympic year by leaping 8.20m at the street athletics event, while Kim Collins and Dafne Schippers stormed to 100m victory down Deansgate

Greg Rutherford extended his unbeaten record in this Olympic year by leaping 8.20m to break the Great CityGames record at the street athletics event in Manchester on Friday (May 20).

Returning to the event for the fourth time and competing on home soil for the first time as a ‘grand slam’ champion, with the 29-year-old having completed the major title set by adding his world gold in Beijing last year to Olympic, European and Commonwealth titles, Rutherford jumped further in every round in a chilly and damp Manchester to eventually win by more than half a metre.

“A new CityGames record – I’m chuffed to bits jumping 8.20m,” he said, on a jump that was made into a slight headwind of 0.6m/sec. “It puts me in good stead for the rest of the season.”

Speaking ahead of the competition, the British record-holder had explained how his 2016 aims include retaining both his Olympic and European titles. “I’ve always said and I still believe that I’ve not maximised the potential that I have,” he said.

Rutherford was competing at the Co-operative Bank Great CityGames Manchester fresh from his return from America where he spent three months training, based at Altis in Arizona. It was an Altis 1-2 in Albert Square, as Melvin Echard jumped 7.53m for the runner-up spot.

Rutherford’s fellow Briton, JJ Jegede, leapt 7.43m for fourth, while Ronald Hertog of Netherlands, who won Paralympic F44 bronze in the javelin in 2012 before switching to the long jump, became the first ‘blade jumper’ to compete in the able-bodied competition at CityGames and leapt 7.00m.

Over on the special, purpose-built track down Deansgate, Kim Collins – who won Commonwealth 100m gold in Manchester in 2002 before claiming the world title a year later – stormed to 100m victory. In this case, experience beat youth as the 40-year-old pipped the fast-rising US sprint star Trayvon Bromell, who claimed the world indoor 60m title earlier this year and world 100m bronze in 2015, 10.08 (+3.2) to 10.14. Just behind, their fellow sub-10 second man Chijindu Ujah clocked 10.15 and Richard Kilty 10.20.

Dafne Schippers dominated the women’s race, dipping under 11 seconds with 10.94 aided by a 2.7m/sec wind to beat her fellow world champion Tianna Bartoletta with 11.19. Germany’s Laura Muller finished third with 11.43 just an hour after winning the women’s 200m event in 23.11 (+3.6) to beat Britain’s European junior 400m champion Laviai Nielsen with 23.23 and Emily Diamond with 23.25.

Tiffany Porter successfully defended her 100m hurdles title to continue a CityGames win streak that has seen her now unbeaten in five consecutive competitions in either Manchester or Newcastle. Clocking 12.89 (+2.2), she finished ahead of a delighted Lucy Hatton with 13.15.

The T44 100m might have been missing former winners Jonnie Peacock and Richard Browne, but USA’s Jarryd Wallace ensured that the crowds were treated to a sub-11 second run as he clocked 10.92 (+2.6) to beat Germany’s Felix Streng who also dipped under 11 seconds with 10.97.

Katie Nageotte was the meeting’s first winner as she cleared 4.50m for pole vault victory. The American, who cleared a season’s best of 4.53m to finish sixth at the Doha Diamond League earlier this month, had first-time clearances up to her winning height before three attempts at a would-have-been PB height of 4.70m. Canada’s Anicka Newell was second with 4.33m, with Sally Peake third with the same height.

The evening’s first track races had been the Great School Sprint finals over 100m, won by Birmingham’s Ishaq Patterson in 12.63 and Newcastle’s Joy Eze in 13.20.

» See the May 26 edition of AW magazine for much more in-depth reports, pictures and results from the Co-operative Bank Great CityGames Manchester