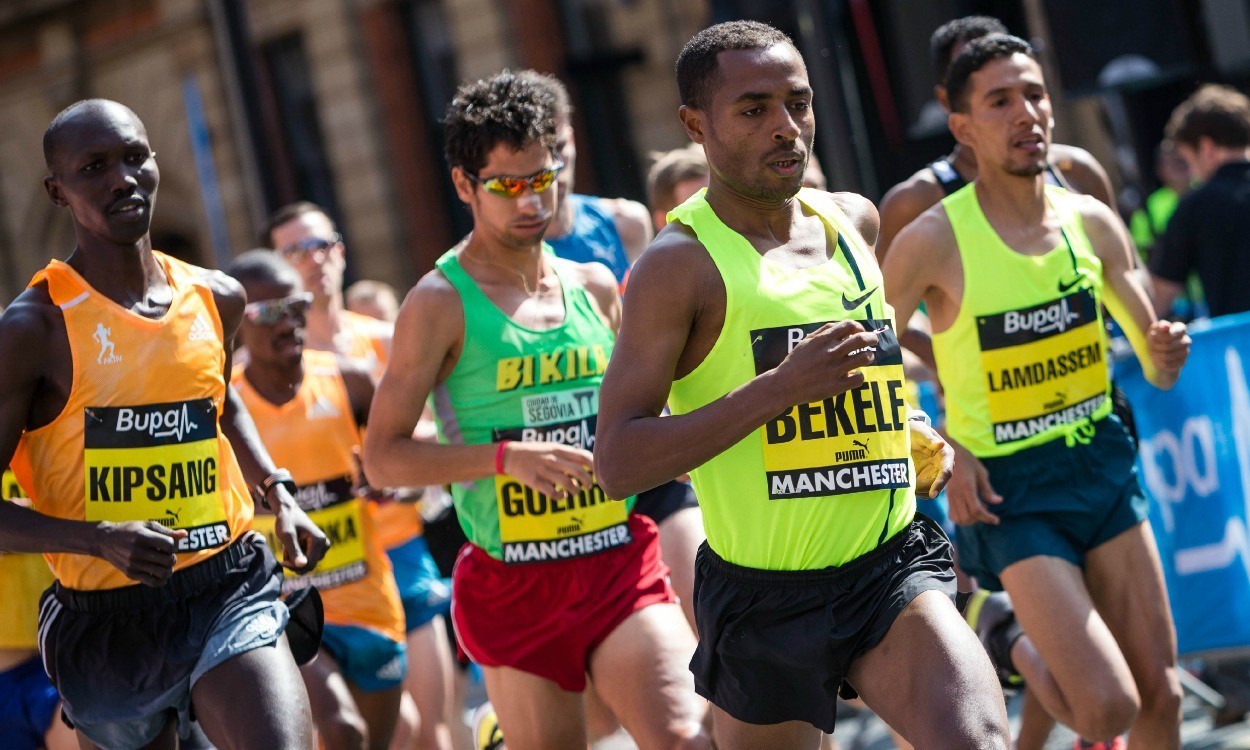 On a warm but windy day, Ethiopia’s world 5000m and 10,000m record holder Bekele used his finishing strength and speed to add victory in Manchester to the Bupa Great North Run title he claimed last year, as world marathon record holder Kipsang again had to settle for the runner up spot, having also been denied by Moses Kipsiro in Manchester last year.

Bekele clocked 28:25 in what was his British 10km race debut as Kipsang finished five seconds adrift. A time of 29:11 was enough for South Africa’s Stephen Mokoka to claim third place, as Nick McCormick was top Brit finishing sixth, 10 seconds behind him.

With the conditions as windy as they were, the pace wasn’t particularly quick, with the leading men’s runners happy to sit in a steadily moving pack. France’s Abdellatif Mefta led a leading group of six in the early stages, as Bekele and Kipsang seemed happy to go with the pace.

This year’s Trafford and Brighton 10km winner McCormick was among those in the lead pack to be dropped by Bekele and Kipsang as the pair reached 8km in 22:56. As the final stretch approached Bekele had more than enough left to easily switch through the gears. Pulling away with 400m to go he proved why he’s not done with the shorter distances yet, despite having made an impressive marathon debut in Paris last month.

It was the first time the pair had ever met over any distance and with Kipsang having clocked his marathon world record of 2:03:23 in Berlin last September and won the 2014 Virgin London Marathon last month in a course record of 2:04:29, the pair’s meeting over 26.2 miles would be more highly anticipated.

“I will now start to prepare for the track,” commented Bekele after the race. “I want to try 10,000m one more time on the track and I need to get ready for that. I need to get faster for that.

“Maybe next year I will run against Wilson in a marathon,” he added.

Kipsang said: “When we meet in the marathon it will be better for me. When it came to the sprint I couldn’t keep up with him.”

There was a quicker start in the women’s race as Dibaba, the reigning world and Olympic champion at 10,000m, went straight to the front with Kenya’s Polline Wanjiku, who ran as a pacemaker at the London Marathon where Dibaba made her debut over the distance.

The first kilometre was covered in 3:04 despite a strong headwind, as France’s Sophie Duarte and Britain’s Gemma Steel closed the gap on the leading two.

Steel, who won the 10-mile Bupa Great Edinburgh Run last month following her withdrawal with a calf injury from the London Marathon where she had also been due to make her 26.2 mile debut, was on her own at 2km as Dibaba and Wanjiku maintained their lead, clocking 3:06 for the second kilometre.

Looking strong, Dibaba proved there would only be one winner, dropping Wanjiku and clocking 15:34 at half way. With an 8km split of 24:58, Dibaba was almost a minute clear and held on to that gap to retain her title, though her 31:09 was some way off the 30:49 course record she set when winning last year’s event.

Although Dibaba’s victory was clear, the battle for the runner-up spot was far from over. It came down to a sprint finish between Steel and Wanjiku, Steel powering over the line to clock 31:10, the same time given to her Kenyan rival.

There were a further three Brits in the top 10, with Helen Clitheroe clocking 33:21 for sixth, Susan Partridge with 33:27 for seventh and Tish Jones with 33:31 for ninth.

Earlier on and Simon Lawson clocked 22:35 to retain his men’s wheelchair title for his third consecutive win at the event, while Liz McTernan won the women’s event in 37:35.

» See next week’s AW, out May 22, for more in-depth Bupa Great Manchester Run coverage. Results can be found here.