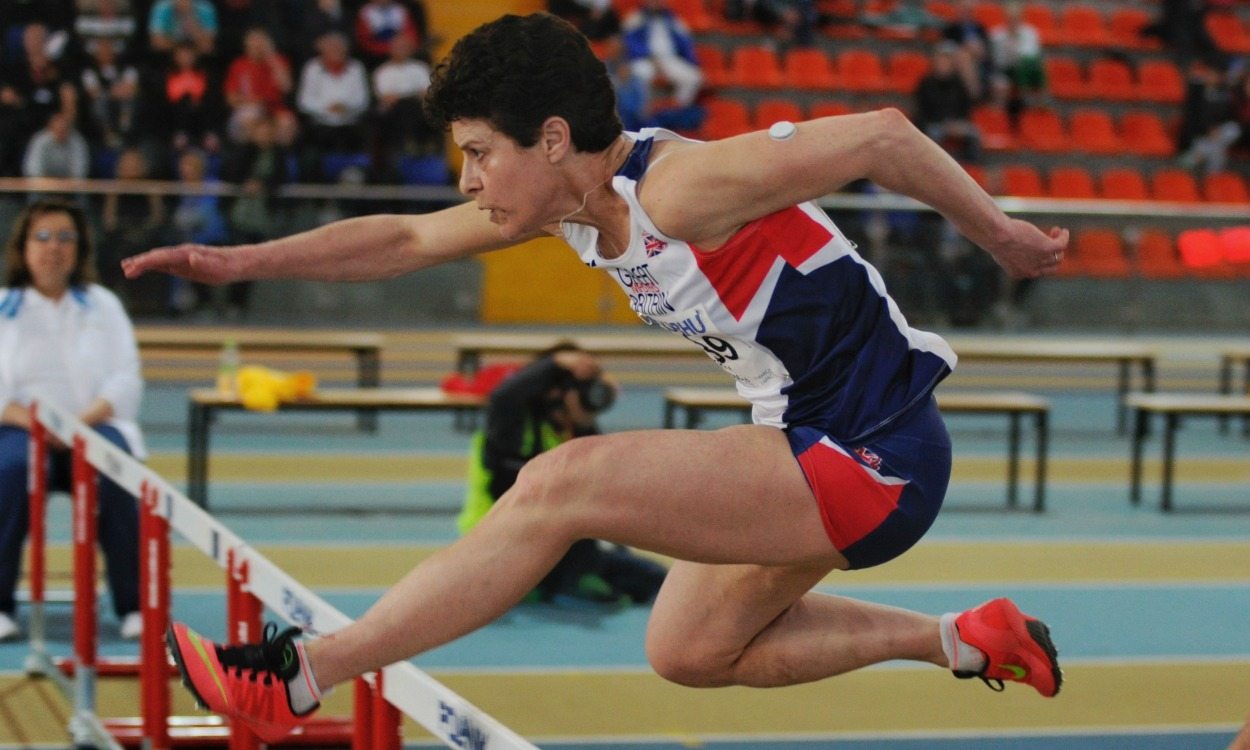 There were medals galore for GB veterans in Italy, while big domestic events included the area road relays and Reading Half

Here are the highlights from a busy weekend at home and abroad, to whet your appetite ahead of Thursday’s in-depth magazine coverage…

Other notable record-setters included W55 Susan Frisby (pictured above) in the 60m hurdles as she broke the world record with a time of 9.80.

Martin Duff’s report and Tom Phillips’ photographs will appear over four pages of this week’s magazine, out on April 7.

Bristol & West won the men’s 12-stage race in 4:01:48 while Charnwood won the women’s race in 2:23:24. News from the North of England Road Relays in Sunderland can be seen here.

Reports and photos from both relays will appear in this week’s magazine.

In the men’s event, they were anchored by doctor Kyle McLellan in his first race for three months. Central AC took the women’s race for the second time in three years.

A full report plus photographs from Bobby Gavin will appear in this week’s issue.

Jiro Mochizuki’s photographs will appear in this week’s issue.

Robert Mbithi won the men’s race in 63:57 with Scott Overall (65:13) outsprinting Chris Thompson and Paul Martelletti for second place and to be the leading Briton in 65:13.

Paul Halford’s report and Jeremy Hemming’s photographs will appear in this week’s issue.

Olympic and world champion Meseret Defar won the 5km race for the fourth time in 15:02 as Britain’s Eilish McColgan was seventh in 16:01.

In a Kenyan double, Daniel Wanjiru won the men’s race in 59:20 with five inside the hour while Violah Jepchumba won the women’s race in one of the fastest times in history of 65:50 after passing 10km in an astonishing 30:29. Reigning champion Worknesh Degefa finished second in an Ethiopian record 66:14.

Susan Partridge, who was surprisingly overlooked for British selection for the World Half Marathon Championships, finished 12th in 71:54, which is more than a minute quicker than any Briton ran in Cardiff in less favourable conditions.

A report plus Jeremy Hemming’s photographs will appear in this week’s issue.

Tom Payn won his second race in two days with victory in 69:11.

Harry Shakeshaft’s photographs of this event will appear in this week’s magazine.

» See the April 7 issue of Athletics Weekly for more coverage from last weekend’s events, including several pages of reports and photos from the European Masters Championships and area road relays