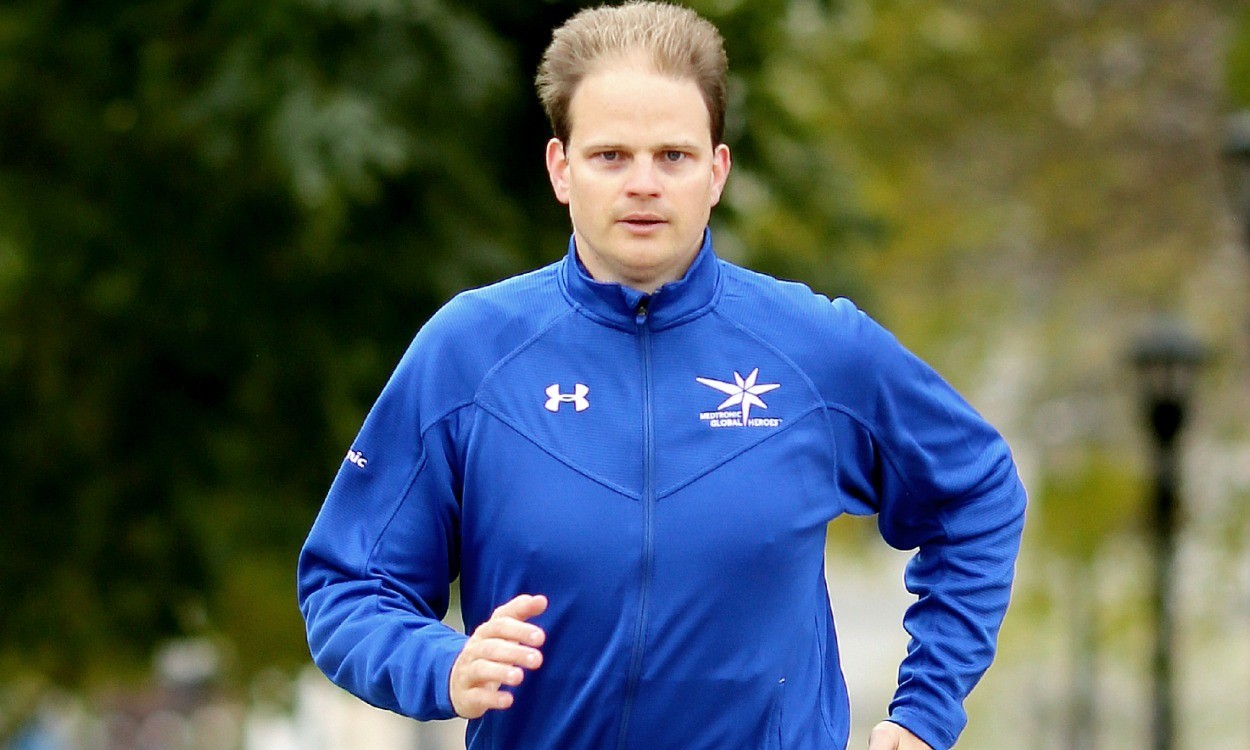 A British runner who was given just two years to live three years ago because of a heart problem ran a 10-mile personal best as he continued his return to road running at the recent Medtronic Twin Cities Marathon weekend.

George Gilbert clocked 1:26:49, knocking 20 minutes of his best for the distance run since the major open-heart surgery he had in 2011. The time also betters his pre-surgery personal best by two minutes, that time having been set in 2000, several years before any symptoms of heart failure were first diagnosed.

Gilbert, a 39-year-old GB masters cycling international and former Cambridge University rower, was diagnosed with his heart condition in 2006 and, having run events including the London Marathon prior to his diagnosis, decided that running would be the sport he would return to as a post-surgery goal.

He ran the Minneapolis event as a Medtronic ‘Global Hero’, having discovered the programme while searching for something to aim towards after the nine-hour-long open-heart surgery which saw the insertion of a mechanical valve to correct his regurgitating bicuspid aortic valve and various different arrhythmias.

Created to recognise runners from around the world who have a medical device to treat conditions such as heart disease, diabetes, chronic pain and spinal and neurological disorders, the Global Heroes programme returned for its ninth year in 2014, with Gilbert one of two British runners taking part.

“It was a profoundly moving experience,” Gilbert said of being part of the Twin Cities Marathon weekend. “I simply wasn’t expecting the impact meeting other people who had similar life-changing surgery would have.

“Being able to swap stories about our decline and recoveries and seeing that we had all gone through the same thing and emerged as better people as a result was amazing. To then be able to run alongside them was nothing short of inspiring.

“Against that backdrop, the result of the race itself really doesn’t seem that important,” he added, though the Cuffley-based runner was delighted with a performance which saw him finish in the top half of a field of nearly 10,000 and the second fastest of the Global Heroes.

“It’s a far better result than I could ever have hoped for,” he said. “It’s easy to forget that the amazing thing here is not the time, but the fact that I’m alive and able to run at all.”

Joining Gilbert as a Global Hero at this year’s events was fellow British runner Dawn Kenwright, a Welsh veteran international. The 59-year-old, who has an insulin pump to manage type 1 diabetes, ran the full marathon, clocking 3:55:23. Kenwright is a regular in Wales’ team for the British and Irish Masters International and is among the top W55 athletes in the UK road rankings this year.

» For more on the Medtronic Global Heroes programme see medtronic.com/globalheroes