Get the weight off your mind 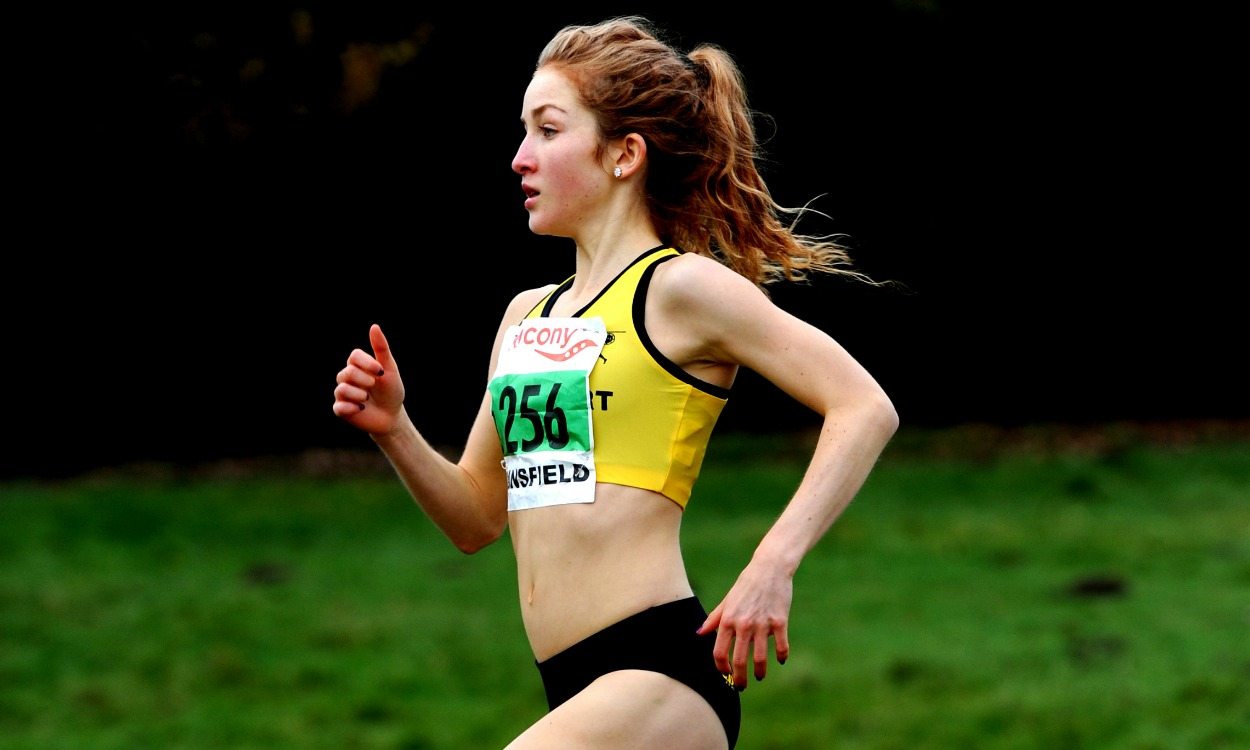 My name is Ruth Sinclair, I am an 18-year-old endurance runner who trains six times a week at Stockport Harriers. Okay, so this is a fairly standard introduction for any sort of disciplined athlete, but what many don’t know about me is that I have also recovered from glandular fever, an eating disorder and have recently branched out into modelling. Yes, a sweaty distance runner modelling make-up and handbags while getting my routine blood tests. Strange, right?

My story really begins in January 2012. I was an energetic 13-year-old running, dancing and swimming every day. I aimed for perfection in all my hobbies and would always question how I could be the best. I remember at one of my cross country races standing on the start line and looking down at all these slim, tall girls wearing crop-tops in the snow and I instantly decided I had to lose weight to be faster. I suppose this is a common misconception in our running community today.

It didn’t help that I spent the rest of the weekend either in a tight swimming costume or leotard staring at a wall of mirrors. I was extremely self-critical and conscious of myself so I suddenly cut back on foods restricting my diet to fresh fruit and sugar-free squash as I had the belief it would make me slimmer, so more talented and successful.

I was very wrong. It was only a matter of days before the weight noticeably fell but so did my energy levels, and I spent more than two weeks in bed. I was cold, achy and even struggled to speak. One day I got up to prepare my usual chopped-up apple and hot Vimto for breakfast, but this time as I nibbled on a segment of apple, I felt a burn down my throat. Moments later the apple came churning out of my mouth.

This starvation diet resulted in my immune system being so weak that I became easily susceptible to infections and physically was unable to swallow. After a blood test I was diagnosed with glandular fever. This was a direct result of my extreme diet.

There is no direct treatment for glandular fever so I just had to let time take its cause. During this period I continued to lose weight and was down to 30kg. My liver and heart also began to fail and eventually I was rushed into hospital. I stayed in until the glandular fever had settled and then doctors started tackling the shopping list of complications this illness brought with it from jaundice to malnutrition. Some of the side-effects of glandular fever can’t be reversed and I now live with aplastic anaemia. Hospital became my new home for the next year with constant admissions, scans and tests.

One of the challenges was returning to a healthy weight again. I spent hours arguing with doctors that I was a runner, supposed to be skinny and didn’t need to gain weight. This fixated mindset stayed with me for the next three years. During this time I smashed PBs and won lots of races. I had become that skinny little girl in the crop-top standing on the line with confidence.

However, last summer I started to experience the consequences of my unhealthy weight and lifestyle. I fractured my left foot and was in a boot for six weeks. After a bone density scan, it became apparent I had osteopenia, the precursor to osteoporosis.

My bones were fragile already and, if something didn’t change, running wouldn’t be an option in the future. I was well aware of this, but my drive to train hard was much stronger and, the second I could tolerate the pain in my foot, I was back running.

My coaches, Mike and Pete Nixon, who have always supported me, sensed something wasn’t right so would speak to my parents, but nobody was able to tame down the voice inside me telling me to train, to get faster and to win. I was extremely lucky I didn’t cause any more damage to my foot at the time.

Fast forward six months to January 2016 and after a solid block of tough cross-country training for the winter I was on my usual 90-minute Sunday run with friends. About half way into the run I suddenly felt a sharp pain in my right foot. The pain was familiar from the left-foot fracture of last year, but this time it felt much worse.

“We need muscle for power and we need food for energy to keep us going. The more fuel we have, the better our engines work”

I knew it was broken but didn’t want to accept that so continued the run. I really can’t describe how agonising that run was but, at the same time, my mind told me it would be even more painful to stop so I continued keeping quiet. When I got home I burst into tears and told my parents what I had done. After a trip to A&E I returned home that evening in a plaster-cast, wearing a hospital gown with crutches, limping to the door in tears. I probably did not stop crying all night long.

My break was much worse than the previous time. I had a full break and the bone had displaced so inevitably recovery was going to be long. Running training was out of the question and I was devastated. Lost and scared, I contacted my coaches to let them know the news, terrified they would leave me because of the hassle I had caused them after they spent hours planning my training sessions.

How very wrong I was. Instantly, Mike and Pete put me in contact with an international athlete from Stockport Harriers, Jessica Coulson. Like me, Jess has battled with injuries but has also demonstrated that through a successful and well-thought-out cross-training plan that fitness levels don’t disappear and we can actually return a whole lot stronger.

Jess put together a cross-training plan but she also helped me come to terms with a healthier mindset towards eating and weight in relation to running. I have learnt and accepted that being skinny is not an efficient and long-term ingredient for a successful athletics career.

We need muscle for power and we need food for energy to keep us going. The more fuel we have, the better our engines work.

Working as a team alongside the guidance of Mike, Pete and Jess, I spent 16 weeks aqua-jogging, completing various sessions. It was no way near as pleasurable as running but I still got that ‘buzz’ after each session and I was certainly exhausted. To help me through the long, tedious sessions, my training friends would join me in the pool and I even did a 90-minute endurance session with a long-jumper! I would be quizzed by others using the pool, but they would always give such positive encouragement after I explained the situation.

“I have gained more than 5kg during my injury and feel much stronger, happier and healthier within myself”

After the pool came the weeks of sweaty sessions spinning away on a stationary bike, before I finally started to run again. It was only a minute but I couldn’t stop smiling. It was the first pain-free run for about five months and the contentment I felt was incredible. I felt I had my magic spark back again.

It’s now more than seven months down the line since I had my second break and reverting back to bad habits isn’t an option. I am still not fully back to the training I used to do but can see it is very close now. I have gained more than 5kg during my injury and feel much stronger, happier and healthier within myself.

I have already broken my local parkrun PB time despite not having hardly run since January and can still slot nicely into my training group during our tempo reps round the track.

I want to give a massive thank you to my coaches for standing by my side throughout all of this. I also need to thank Jess for the fantastic training plans and all the advice and knowledge she has voluntarily shared with me. Then there are all my friends and family who have been there to keep me smiling and motivated throughout all of this. There is no way I would be the person I am today without these fantastic people.

Looking to the future, I have ambitious aims to compete in marathons and perhaps having the honour of representing my country one day. I also have my sights set on a career in dentistry, as well as continuing to promote and encourage other aspiring runners to have healthy attitudes.

I have recently been offered a 12-month modelling contract, which is very controversial for a sweaty endurance runner, even more so when I’m only 5ft 2in. I don’t know where this will take me, however I have developed a strong enough mindset to ignore the negative criticism and promote confidence, regardless of body shape, height, hair colour, etc. To me, none of this really matters as long as I am healthy, happy and strong enough to run!

» This article was first published in the October 6 issue of AW magazine. For more from ‘Talking point’, see future editions of the magazine