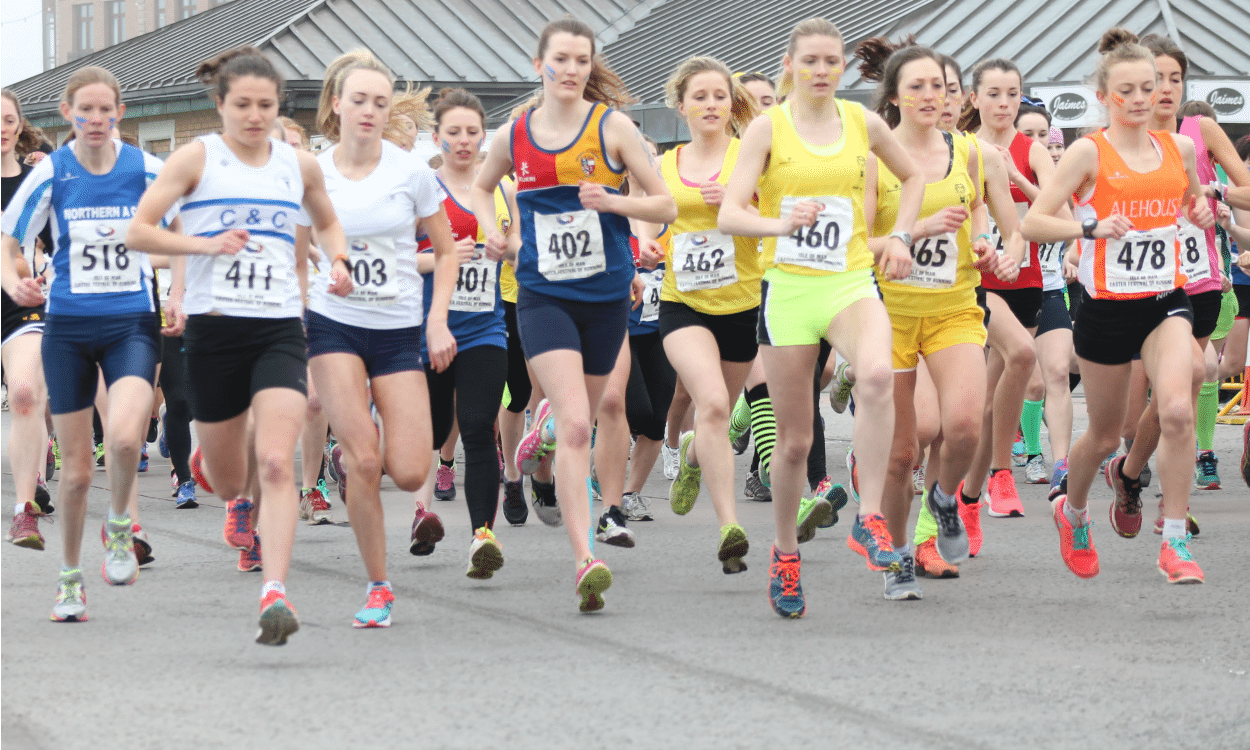 Duathlete Georgina Schwiening secured a hat-trick of wins at the Isle of Man Easter Festival from April 3-5, while Phil Sesemann was also among those to secure victory.

Over 500 athletes tackled the three-race series. The 10km Bushy’s 10k road race, which opens the festival on Good Friday evening, saw around 300 runners toe the line at the breakwater on Port Erin Promenade.

Sesemann, running for Leeds Doss, claimed the victory in 31:32 ahead of Cambridge University Greyhound Chris Bannon with 31:34 and Dave Norman of Manchester University Alehouse with 31:43. Norman had sustained a hamstring problem in a track session earlier in the week. The team honours went to Cambridge with Leeds and Liverpool also in the frame.

Cambridge and Coleridge runner Schwiening clocked 36:08 to take the honours in the women’s event in an exciting battle with Caroline Lambert of Wetherby Runners who ran 36:09 and Katy Hedgethorne from the Cambridge University Greyhounds with 36:32.

Schwiening, who won the world junior duathlon title in Ottawa in 2013, said: “I came here to test myself, but with the conditions I had to be conservative.” Team honours went to Liverpool with Leeds and Cambridge close behind with only six points dividing the first three.

The weather improved for the Full Factory Winnerswear Peel Hill races on Saturday. Linton Taylor from Leeds Doss ran 20:59 to win the four-mile race from Tom Martyn of Hunter’s Bog Trotters with 21:01 and Ben Stevenson from Edinburgh University Hare and Hounds with 21:11.

Taylor said: “I just decided that the race would not be won on the hill, but on the descent and I just held back and benefitted from that.”  Leeds Doss were the team victors, ahead of Cambridge and Manchester.

The first two positions in the women’s three-mile race were as they were in the 10km with Schwiening clocking 17:22 and Lambert again securing the runners-up spot with 17:27.  Edinburgh University Hare and Hounds runner Georgina Tindley ran 17:42 for third place. The team placing was Edinburgh in first, followed by Liverpool and Manchester.

Schwiening completed a hat-trick of victories win a final win in the Outback 5km road race on Sunday. She ran 17:15 to beat club-mate Hedgethorne by two seconds. Lambert was third with 17:56. The team results saw Edinburgh University Hares and Hounds take the spoils with Leeds Doss and Cambridge University Greyhounds taking second and third respectively.

With consistent performances over the three days Norman took the overall men’s title, while Schwiening claimed the women’s title with her three wins.